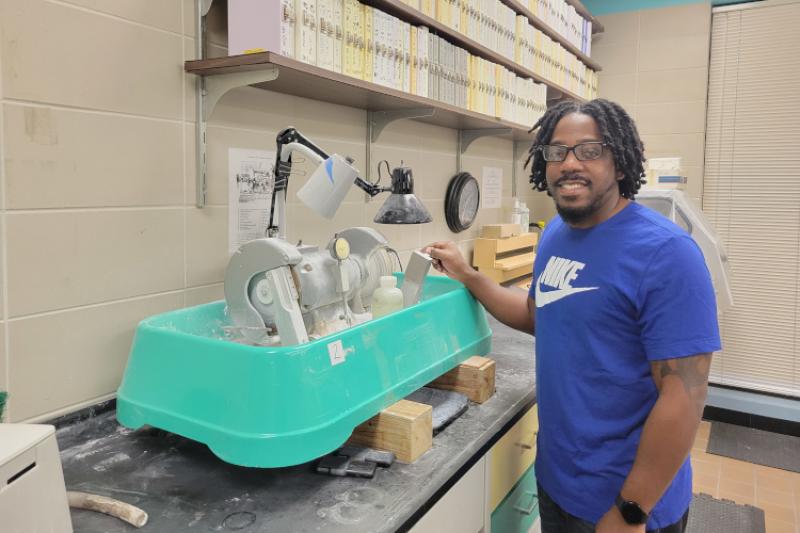 I grew up on Long Island, New York in a town called Bellport.

Where did you go to school and in what subject did you get your degree(s)?

How did you come to work at the Southeast Fisheries Science Center?

Following the Deepwater Horizon oil spill, I moved from Delaware to Florida. I worked on a Natural Resource Damage Assessment for a Gulf sturgeon research project in the Choctawhatchee Bay and the Gulf of Mexico. During my down time I started volunteering at the center’s Panama City laboratory. After about a year and a half a position opened up and I applied and was hired shortly thereafter.

What do you do at the science center?

I am a Senior Research Associate for the Cooperative Institute for Marine and Atmospheric Studies. My work supports the Life History and Biology Branch of the Fisheries Assessment, Technology, Engineering, and Survey Division. My main focus is sectioning and aging fish otoliths, or ear bones. The otolith is sectioned so the core of the otolith can be seen when they are mounted onto a microscope slide. To determine the age of the fish I use a microscope and count annual growth rings in the otolith, similar to counting rings on a tree. Age data is used to help gain a better understanding of fish populations so we can monitor and manage the species we study. The primary species I process is red snapper. I also process several other species such as scamp grouper, gag grouper, golden tilefish, and blueline tilefish. I have also assisted with other projects such as the Gulf of Mexico shark pupping and nursery survey.

Honestly, what I like about my job is explaining what I do for a living to people and seeing their reactions. Many people have no idea that you can age fish or why we age fish. I enjoy explaining how everything works. Most of all I like explaining what I do to minorities, many of whom have no idea people of color even work in this field. As a kid, I had no idea about the marine science field and had a late start getting into it compared to others. In high school we were not exposed to it, there were no internship programs or anything of that nature. I actually stumbled into this field by accident. In college a friend asked me if I wanted to do an internship. I had no idea what it was for but I said yes. It ended up being with NOAA Fisheries’ Sandy Hook, New Jersey office. I liked it so much that I did another internship after graduating. I love opening the door to this field to our youth especially to the African American community and other people of color who may not be exposed to it.

What does Black History Month mean to you?

What Black History Month means to me is it’s a month to remind America's younger generations what people of color have accomplished and what we have been through. Black history is more than just learning about slavery and segregation, which is what is already taught in schools. Black History Month enables Americans to learn about things like inventions and impacts to the civil rights movement by African Americans. For example, most people don't know that the three-position traffic light was invented by an African American whose name is Garrett Morgan. During Black History Month people also learn about unsung heros in Black History like Claudette Colvin. Mrs. Colvin is known for being the first African American not to give up her seat on a bus for a white person. She was arrested at 15 years old for refusing to move. About 9 months later the well-known Rosa Parks took her stand and refused to give up her bus seat. Every year I learn something new about Black History. This year I learned that I myself added a small piece to Black history: I am the first African American male fish biologist in the Panama City laboratory. Most importantly, Black History Month is American history.

What do you like to do outside of work?

I spend a lot of time with my wife of 12 years, three children ages 15, 10, and 5, and our dog Brutis. Outside of family time, I enjoy shooting pool. I am in an amateur 9-ball league and have played on this team for several years. In 2021, we played in Las Vegas for the American pool players Association National team tournament. 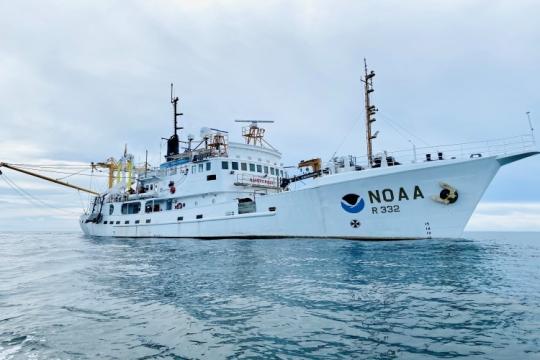