Other international collaborators include researchers from Sweden, France 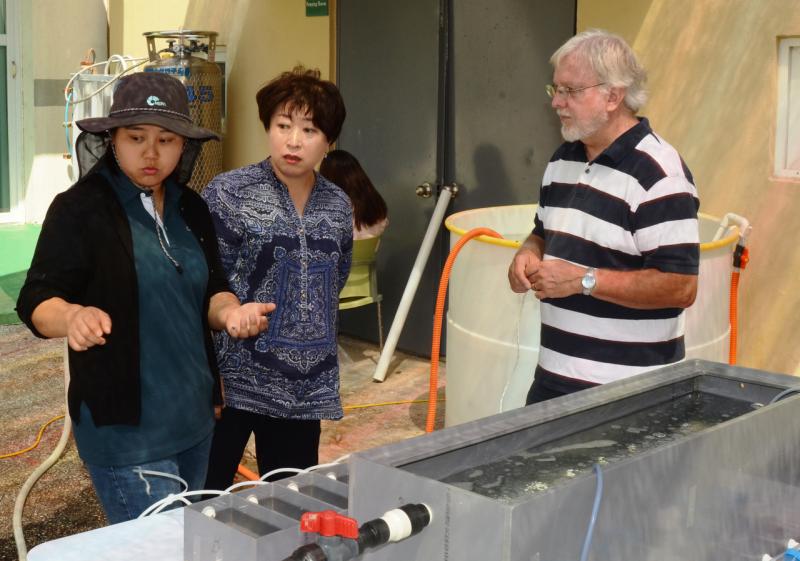 Scientists at NOAA's Milford Laboratory have collaborated with many colleagues at academic institutions, state and local governments, other federal agencies, the shellfish industry, and international organizations since its founding almost 100 years ago.

Many of the relationships have involved a student or colleague who has spent a few months to a year at the lab, part of the Northeast Fisheries Science Center, in Milford, Connecticut. The ongoing relationship with South Korea’s National Institute of Fisheries Science (NIFS), formerly called the National Fisheries Research and Development Institute, is no exception. Dr. Hyun Jeong Lim spent a one-year sabbatical with Milford Lab’s Gary Wikfors in 2005, and has remained the lab’s primary partner at NIFS ever since.

In 2010, Hyun Jeong and Wikfors applied for funds through the Korean-U.S. Bilateral Agreement to continue their collaboration and have had reciprocal visits every year since funded through that agreement. Two researchers from NIFS, one of them Hyun Jeong, visit Milford every year for about 7-10 days and work with the staff in the lab and in the field. Wikfors and another Milford Lab researcher visit Hyun Jeong’s lab for a week to 10 days every year to share information, techniques and discuss common scientific interests.

"I very much value the exchange of scientific and social aspects of shellfish aquaculture in our two nations," Wikfors said. "Aquaculture has been embraced as an integral component of seafood production in Korea, and the scope and scale of expansion of ocean farming and ranching there provides invaluable opportunities to observe and evaluate the kind of aquaculture build-out the U.S. may be contemplating."

In August 2017 Mark Dixon, who has managed the Milford Microalgal Mass Culture Room for nearly 20 years, made the trip to South Korea with Wikfors. NIFS, headquartered in Busan, is operated by the South Korean government under the Ministry of Food, Agriculture, Forestry and Fisheries, with subsidiary institutes focused on each of the major Korean fisheries. Shellfish research is conducted at labs in Incheon on the west coast and Gangneung on the Korean east coast.

Topics have evolved from immunology of oysters, through performance differences between diploid and triploid oysters, to the current cooperation on quantifying natural food use by bivalves in the environment.

What’s next? Funding for FY2018 is focused on collaborative research on the use of natural seston – organisms and nonliving matter swimming or floating in water – by bivalves as food, especially under low-food conditions.

Following an annual reversal of seasons, Wikfors and Dixon will travel to Gangneung in late spring of 2018, and Hyun Jeong and Saebom Son, a recent University of Rhode Island Ph.D. graduate, will visit Milford in late summer.

In addition to the South Korea connection, the Milford Lab annually hosts collaborators from other nations. Among the international visitors and collaborators in 2017 were Susanne Vogeler, a post-doc at the University of Gothenberg in Sweden, who spent eight weeks at the lab studying hormonal control of metamorphosis – or setting – of bivalve larvae. She plans to return to the Milford Lab for further studies in 2018. 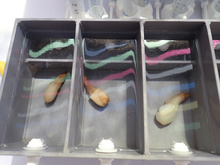 Lucie-Liane Duchesne, an engineering student at UniLaSalle near Paris, France, conducted biodeposition studies of diploid, triploid, and tetraploid oysters during her three-month stay in Milford. Duchesne was part of a Milford Lab team collaborating with researchers at the Virginia Institute of Marine Sciences (VIMS) and made several sampling trips over the summer to VIMS. She also provided assistance with several other projects while under a NOAA Fisheries Office of Aquaculture internship.

"In my view, the main value of international collaboration transcends the science that we have in common," Wikfors said. "Hosting foreign visitors and traveling to other nations broadens our perspective, provides insights into other ways of thinking and acting, and motivates us to step outside of our limitations. We are incredibly welcoming to foreign visitors; I know we have sent many, especially students, home with life experiences that have changed their minds about the United States and our citizens."