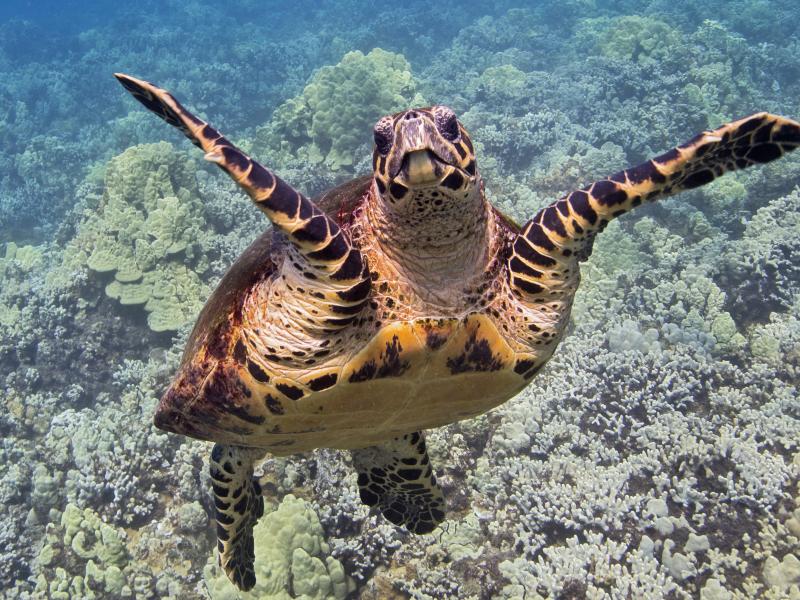 If you’ve ever gone swimming in Hawaiian waters, you’ve probably seen plenty of green sea turtles, or “Honu,” their Hawaiian name. However, you would be extremely lucky to see a hawksbill sea turtle, known locally as “Honuʻea,” or just “ʻEa.” Hawksbills are very rare in Hawaiʻi compared to green turtles, which outnumber hawksbills by about 100 to 1.

Because they are uncommon, they are difficult to study. Researchers have pondered their nesting activity, population, vulnerabilities, and behaviors for decades. NOAA Fisheries researchers recently published three studies that shed light on these questions to help support conservation and recovery efforts.

Researchers have observed an increase in the number of nesting hawksbills and a higher number of first-time nesters on Hawaiʻi Island over the past 15 years. Combined with the consistent documentation of a new nesting site on Moloka‘i, this bodes well for the future recovery of the population.

These findings were highlighted in the first of the three studies, which examined hawksbill sea turtle nesting in Hawaiʻi and trends in the nesting population. The researchers used information gathered by individuals and organizations from numerous beaches around the main Hawaiian Islands over the past 30 years to do so. The Hawaiʻi Island Hawksbill Project contributed greatly to this effort.

Results indicate that only 14 female hawksbills nest in the main Hawaiian Islands annually. They lay approximately 48 nests per year. However, it's nearly impossible for staff to monitor all of the nesting beaches all of the time (most are very remote). Researchers believe that surveys might be missing turtles or nests, and it is likely that more than 14 hawksbills nest in Hawaiʻi each year.

Despite the small population size and the monitoring limitations, data analysis suggested that both the number of nesting females and nests have increased since 2006. Over the past 15 years, staff observed a higher percentage of new (first-time) nesting hawksbills compared to the previous 15 years. This indicates that the population is growing.

The majority of nesting activity occurs at four beaches along the southern coast of Hawai‘i Island. However, recent monitoring on Moloka‘i has revealed nesting numbers similar to the most important beaches on Hawai‘i Island. Moloka‘i appears to also be a very important nesting site for hawksbills.

The second study highlighted threats to the species that represent obstacles to recovery. Over the past 35 years, a total of 111 stranded hawksbill turtles have been documented. A stranding is any turtle found sick, injured, or dead. Researchers evaluated these strandings and classified the potential causes into 11 major categories, such as vessel strikes, fishing gear interactions, ingested plastic, and predation.

The primary threat to hawksbill sea turtles in Hawaiʻi is interactions in coastal fishing gear, particularly hook-and-line gear. Researchers found it caused almost 50 percent of the documented strandings. Turtles can get hooked or entangled in active and derelict fishing gear. The lost or abandoned gear can get entangled on reefs and ensnare a turtle, keeping them from surfacing for air. If they can’t breathe, they drown. Some hawksbills even found their way into lobster or crab traps and drowned.

The researchers also found three hawksbills ingested multiple hooks. These “repeat offenders” may represent turtles that feed in coastal fishing hotspots, making them more likely to interact with gear. This study highlights the importance of collaboration between management agencies and coastal fishers to reduce these interactions with hawksbill turtles. One way the public can help is to dispose of any derelict fishing line and gear they see on shores, reefs, and surface waters.

Hawksbill turtles can take decades to reach adulthood, so threats to adult hawksbills merit special recognition. Only adults can reproduce to maintain and grow the population. Four nesting adult hawksbills died after falling into large volcanic fissures on the southern coast of Hawaiʻi Island. Another two adult females were struck by vehicles while crossing North Kihei Road to nest in Southern Maui. Several organizations maintain a fence to protect nesting hawksbills along North Kihei Road. While we cannot prevent all threats, we should do our part to keep hawksbills safe.

The third study revealed previously unknown hawksbill social behaviors such as head touching, biting, and even some semi aggressive interactions (like contesting). Biologists have always considered marine turtles rather solitary animals that only engage in social interactions for mating and reproduction. However, the study observed four hawksbills living in waters along western Maui and found they often engaged in social behaviors. These included intriguing and novel interactions. In some cases, up to three of the turtles would engage in social activities at once.

Recent research on green and loggerhead turtles in other ocean regions has also documented social behaviors not related to reproduction. We don’t know the intention, purpose, or significance of these social behaviors yet. However, researchers wonder whether bringing hawksbills together in groups could make them more vulnerable to poaching, fisheries interactions, or vessel strikes. Regardless, social behaviors in hawksbills and other sea turtle species are a relatively unexplored and fascinating area of marine turtle ecology worthy of more investigation.

NOAA Fisheries will continue to work with local partners and communities to increase our understanding of hawksbill sea turtle ecology. These conservation and population recovery efforts ensure that Hawaiian hawksbills remain part of our collective community for future generations.

For additional information on this story, contact Dr. Alexander Gaos.