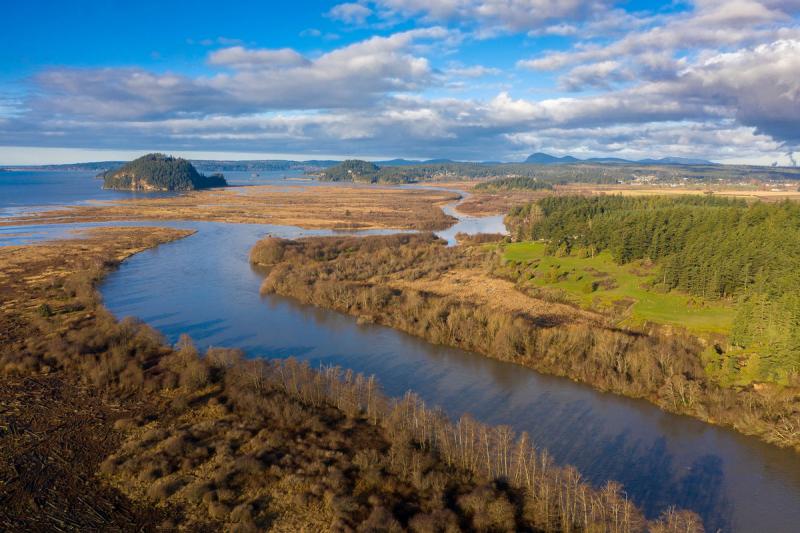 The North Fork of the Skagit River runs through the Skagit River Delta in Washington. The area includes nearshore habitat important to juvenile salmon and steelhead migrating to the ocean. Credit: Shutterstock

The Port Gamble S'Klallam Tribe is cleaning up and restoring past environmental degradation in Port Gamble Bay. The Tribe plans to remove an old and decrepit pier and boat launch and install a new one in a more accessible location.

Though mostly elevated, the new boat ramp and floating dock system would affect nearshore habitat. These are the rich shoreline areas where young Puget Sound Chinook salmon and steelhead put on their last growth before entering the open ocean. The impact meant that the Tribe had to work with NOAA Fisheries to assess habitat impacts using the new Puget Sound Nearshore Habitat Conservation Calculator.

NOAA Fisheries developed and introduced the Conservation Calculator last year as a science-based tool to assess the impacts of shoreline development on nearshore habitat. Nearshore developers now have two main choices. They must either:

One way to do that is by obtaining credits that represent shares of a restoration project, which could be a conservation bank. The Calculator ensures that the restored habitat eventually provides the same ecological benefits of the habitat that was lost.

“The Tribe depends on the species that depend on this habitat that we know is in short supply in Puget Sound,” said Barrett Schmanska, manager of the tribal project. “Salmon are part of the Tribe’s history, culture, and future. We know as well as anyone the cost of losing nearshore habitat, so of course we support and advocate for its protection.”

The Tribe has undertaken a restoration campaign across Port Gamble Bay, restoring habitat by removing toxic creosote pilings often used in historic shoreline construction. The chemicals in creosote have been shown to impair juvenile salmon and reduce their survival. That is an example of the steps that developers can take to make up for any new impacts on nearshore habitat.

Nearshore is one of the most imperiled forms of habitat in Puget Sound. It often occurs along the same scenic shorelines where people want to live and recreate. Healthy nearshore habitat gives native fish their last chance to feed and grow in shallows before heading for the open ocean. Their growth there is a critical chapter in their life cycle because it boosts their odds of surviving the following years in the ocean.

The problem is that juvenile Puget Sound Chinook salmon and steelhead now die at high rates during that critical period, in part because they lack healthy habitat. That in turn affects the number of adult chinook salmon returning to their home rivers to spawn, an impact that cascades through the ecosystem. Those adult Chinook salmon are also essential prey for endangered Southern Resident killer whales.

“The fish cannot afford further losses of nearshore habitat if we are going to have a legitimate chance of recovering them,” said Kim Kratz, Assistant Regional Administrator for the Oregon and Washington Coastal Office in NOAA Fisheries’ West Coast Region. He said that continuing losses of nearshore habitat undermines the millions of dollars of habitat restoration taking place across the region.

“We could not keep pace with the losses, let alone gain ground toward recovery,” he said. The Calculator requires that developers offset impacts to nearshore areas with equal habitat elsewhere in the same marine basin. This helps to halt the deterioration of habitat and “ensures that restoration can actually improve the outlook for the species.”

A user's guide accompanies the Conservation Calculator. NOAA Fisheries biologists have organized online workshops and appeared at conferences to explain how it works. Its centerpiece is a spreadsheet that breaks down the impacts of development projects based on the latest science. It translates them into a common currency known as habitat credits.

Some projects may include habitat improvements such as removal of creosote pilings that help offset their impacts at the same site. For projects that have net impacts on nearshore habitat, the Conservation Calculator determines how many habitat credits would offset the impacts. Developers must then obtain those credits through one of several options, such as purchasing credits from conservation banks that restore damaged habitat elsewhere in Puget Sound.

The Calculator was developed as part of an endangered species review of multiple shoreline development projects, completed together in a batch. Grouping reviews like that is more expedient and sets the stage for others to follow. “Having a consistent, transparent, and repeatable methodology provides greater certainty for the applicants and greatly streamlines our analyses,” said Scott Rumsey, Deputy Regional Administrator of the West Coast Region.

The Conservation Calculator and the process “scared me to death at first,” said Steve Robert of Davido Consulting Group, which helps clients advance projects in the region. However, he said that after following the process with projects including a community paddlers dock in Gig Harbor, “its purpose is clear and the process is workable.” He said that the Calculator took some initial getting used to but ultimately the outcome made sense.

“I think people are accepting it as they get used to it,” he said.

The Calculator’s assessment reflects an additional level of scrutiny for new development in Puget Sound. But “the critical state of nearshore habitat and the species that rely on it justifies that scrutiny,” Schmanska said. Nearshore habitat supports salmon, other finfish, and forage fish as well as shellfish that are essential to the Tribe’s traditions, ceremonies, and culture.