Fishermen and researchers collaborate on a new study that evaluates the use of a restrictor rope on bottom trawl surveys and its impacts on catch. 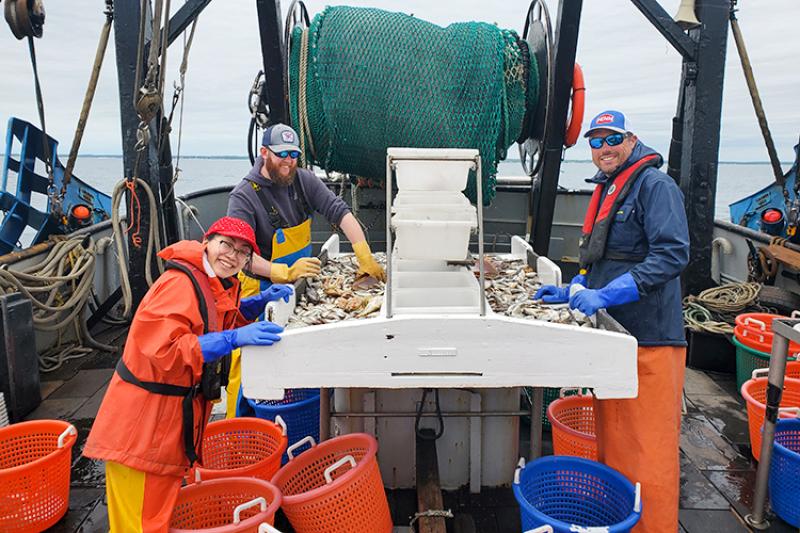 For many years, federal and state bottom trawl surveys have worked hard to develop survey gear that performs consistently to ensure accurate and reliable data. The rapid expansion of offshore wind energy development in the northeast region will impact bottom trawl surveys. Existing surveys will need to adapt to operate in and around offshore wind farm areas. Researchers will also need to develop new surveys to fill data gaps created when pre-existing survey locations can’t be accessed. A standardized gear configuration will need to be used so data collected during existing and new surveys can be used, compared.

The Northeast Trawl Advisory Panel is a joint advisory panel composed of Mid-Atlantic and New England Fishery Management Council members, fishing industry, academic, and government and non-government fisheries experts. It identified the use of a restrictor rope as a possible way to standardize all the bottom trawls surveys in our region. Currently, scientific surveys in our region don’t use restrictor ropes.

What Is a Restrictor Rope?

Many factors can affect how a trawl net fishes in the water, including water depth, tides and currents, boat speed, and warp length (the amount of tow cable let out). These can influence how far the heavy doors on a trawl spread, which can change the shape of the net opening. For example, when the doors spread wide, the net opening can be flattened like a pancake. When they’re not spread as wide, the opening takes on a more oval shape.

“Restrictor ropes have the possibility of reducing one of the most variable parts of trawl gear geometry—door spread,” said Dr. Mike Pol, Panel member and research director at Responsible Offshore Science Alliance. “Preventing the doors from spreading helps avoid overspreading the net, and can help maintain a constant net shape and reduce variation in catchability. Variation in area swept is also reduced, helping make indices from trawl surveys more accurate.”

Scientists use area swept values to calculate and standardize catch. This means the catch in one location can be compared to catches in other locations.

Collaborating with Industry and Colleagues

Last month, scientists from our science center worked with the captain and crew of the F/V Darana R and scientists at the Virginia Institute of Marine Science to begin the restrictor rope study recommended by the panel. The Darana R is a commercial fishing vessel used to conduct the bi-annual Northeast Area Monitoring and Assessment Program bottom trawl survey led by the institute. The program facilitates the collection of fishery-independent information in the Northeast and standardizes survey procedures to improve data quality and accessibility.

“Partnering with the program for the restrictor rope research is ideal, as they have long-standing expertise with trawl survey gear as well as a skilled crew to execute the work,” said Dr. Anna Mercer, chief of our Cooperative Research Branch and panel member.

Dustin Gregg, the VIMS chief of trawl survey operations, is optimistic about the study. “Survey data quality is inexorably linked to the performance of the sampling gear. Given the interest in adopting this gear package for a variety of new research endeavors, it’s my hope that this study will allow the restrictor modification to help achieve cross-platform data uniformity in the future.”

What the Study Team Did

The first set of study experiments started on May 30, 2022, in Rhode Island and on Block Island Sound off the coast of Rhode Island. Over 8 days, the team conducted 80 bottom trawl tows—40 with the restrictor rope and 40 without. During the restrictor rope tows, each end of a 7/16-inch, high-strength/low-stretch, single-braid polyester Tenex rope was attached to the bottom trawl doors using Viking hooks. The team collected a variety of data, including:

Since species composition differs by season, the team will continue this research in the fall. In the coming months, science center and VIMS scientists will analyze the data and present their research findings to the panel in early 2023.

Dr. Kathryn Ford, panel lead for our science center, is enthusiastic about the continued collaboration. “There are legitimate concerns about how to standardize collection of trawl survey data to be able integrate multiple sources of data, and to understand the impacts of offshore wind on our fisheries resources. The panel has long focused its attention on research survey performance, and this study represents the first in which we are examining how to best standardize survey gear deployed from commercial vessels.”