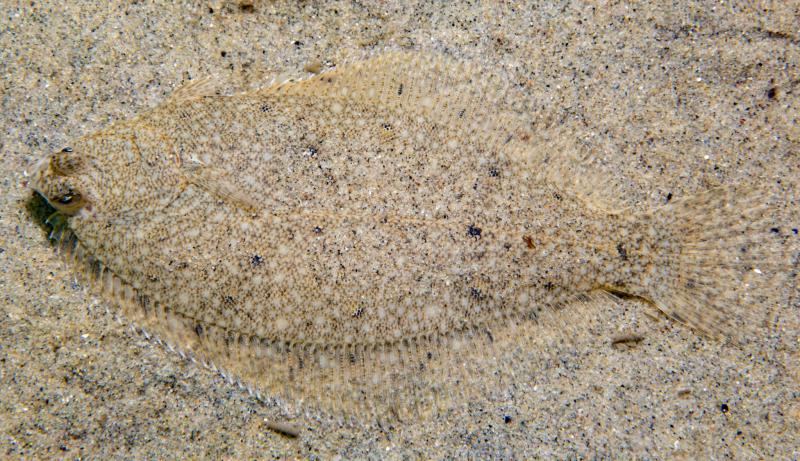 Our long-running scientific bottom trawl survey strives to keep its net performing similarly from tow-to-tow, and tracks net performance during each deployment. We know there are differences in net performance between each tow, but when does this difference become significant enough to affect catch?

Newly published research conducted by fishermen and scientists helps to answer questions about the efficiency of our science center’s bottom trawl survey net. “Efficiency” is a measure of how many of the fish that are in front of a towed net are actually captured by that net. One factor that can influence efficiency is the wing spread of the net, which is how widely the net opens. We know this spread changes with depth so that was a focus of this work.

“The results suggest that varying wing spread in the bottom trawl survey net does not have a significant impact on how efficiently the net captured the targeted flatfishes,” said Andrew Jones, a fishery biologist at our science center and lead author of the paper. “However, the varying wingspread among tows did affect the total weight of catch. Specifically, an increase in catch was observed with an increase in wing spread.”

One long-standing fishing industry concern is what happens when the net is towed in deeper waters. The shape of the net will change and a gap can form between the seafloor and the part of the net that’s dragging the bottom. The researchers were also interested in other factors influencing net efficiency as the tow depth increased. They looked at changes in the trawl net webbing and the effect of towing over a larger or smaller area. Was the net capturing fewer of the fish in front of it as the depth of the tow increased? Was it missing flatfish, like flounders, since they can more easily swim under the net than rounder fish can?

The  concern about the net performing differently at different depths was identified by the Northeast Trawl Advisory Panel (NTAP), a joint advisory panel of the Mid-Atlantic and New England Fishery Management Councils. The panel identifies concerns related to regional scientific surveys and supports research to address these concerns.

Guided by NTAP, fishermen and staff from our science center investigated how differences in net wing spread at different depths might influence catch efficiency of four flatfish:

For this research, the science center contracted with Salt Pond Fisheries to charter the F/V Karen Elizabeth. This commercial fishing vessel can fish two trawl nets side by side at the same time. During the experiment, the wing spread of one net was maintained at 13 meters for every tow as the control. The other net varied between 9 and 16 meters across tows as the treatment.

“The results have been accurately interpreted from my perspective and provided results many of us did not expect,” said David Goethel, commercial fisherman and NTAP member. “The NTAP has fishermen from several different fisheries and regions, and scientists from several different biological disciplines. This allowed us to work through the collected information and accept the unexpected results.”

The results reported by Jones and fellow authors can be used to better account for wing spread variability in generating the abundance indices. These indices are a primary source of information for stock assessments. The NTAP is discussing its next project, which is to use restrictor wire—a cable that physically limits the wing spread—to further standardize wing spread across tows.