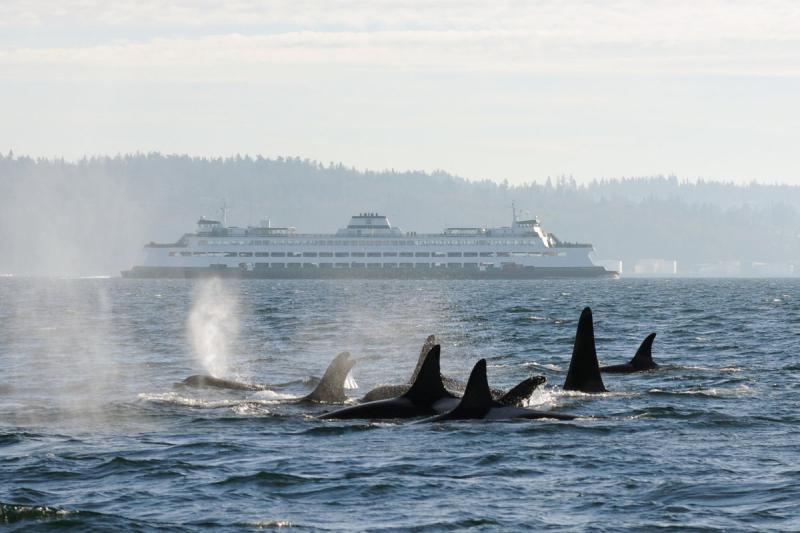 Orca pod swims in the Puget Sound as a ferry transits in the background. Credit: Candice Emmons/NWFSC

Human-caused underwater noise that affects endangered Southern Resident killer whales comes from a variety of sources. These include recreational boaters, whale watch vessels, and large commercial vessels that transit Puget Sound and the Salish Sea every day. Now, a new program called Quiet Sound aims to better understand and reduce the effects of large commercial vessels on the whales in Washington state. Quiet Sound has five active projects, one of which is a seasonal voluntary slowdown of large ships which started in October 2022.

Slowdown areas are designated zones on the water that cover parts of the shipping lanes. A seasonal, voluntary slowdown zone asks that large commercial vessels reduce their speed in certain areas and at certain times. Slowing down will lessen the underwater noise emitted by the ship’s propeller. In Canadian waters, the ECHO program has implemented slowdown zones, reducing underwater noise. That allows Southern Resident killer whales to hunt more effectively, since they use sound to track their prey. By slowing down, participating ship operators helped reduce underwater sound intensity in Haro Strait and Boundary Pass by up to 55 percent in 2021.

After review by stakeholders and tribal partners, Quiet Sound recently finalized guidelines for a trial Seasonal, Voluntary Slowdown Area in Southern Resident critical habitat in Admiralty Inlet and Puget Sound. It would be in effect from October 24 to December 22 (recently extended to January 12), when Southern Residents are known to frequent the area. 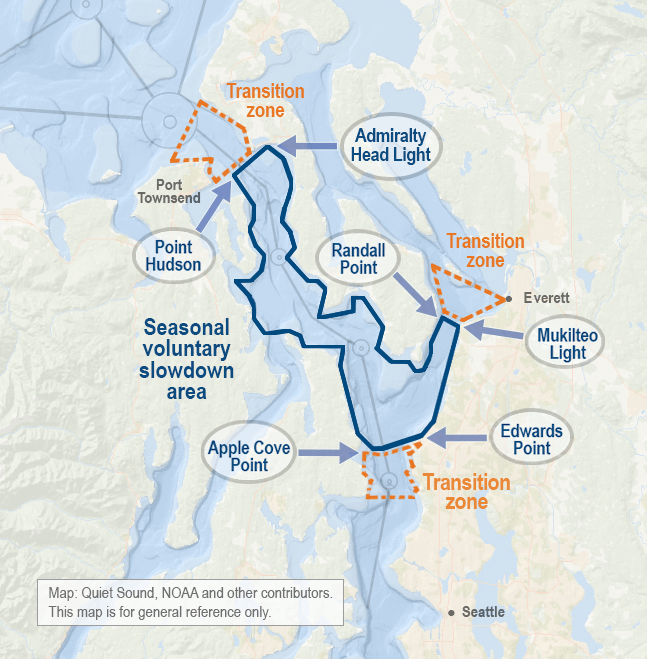 The Quiet Sound slowdown aims to expand the ECHO program borders, protecting Southern Residents as they move and hunt between Canada and Washington throughout the year.

”We are looking to protect the Southern Residents’ foraging habitat,” said Caitlin O’ Morchoe, Project Manager of the Quiet Sound Program. “The two programs hope to work together to create ‘a quiet bubble’ of good quality habitat as whales visit these parts of the Salish Sea.”

When safe to do so, the trial encourages commercial shipping pilots and captains to transit the slowdown area at or below:

Quiet Sound predicts these slowdowns would add an hour on average to the total transit time, depending on the vessel type, water currents, and transition time.

"We’ve been encouraged by the support from the commercial shipping industry, who are interested in seeing whales rebound from current low population levels and are dedicated to being part of the solution,” said Quiet Sound Program Director, Rachel Aronson. “Shippers came to the table very early on to help us craft a slowdown recommendation that is safe and compatible with the realities of the maritime industry."

The program aims to educate commercial shipping pilots about the slowdown. The program will collect baseline data on sound levels when killer whales are present in Puget Sound, both with and without a slowdown. Quiet Sound plans to use data from the trials to improve their effectiveness.

“Environmental stewardship efforts are becoming the norm for ocean carriers and that will include broad participation in the Quiet Sound slowdown,” said Pacific Merchant Shipping Association Vice President, Captain Mike Moore. “Quiet Sound’s focus on data-driven efforts that truly benefit the Southern Residents will create credibility and enhance participation. We look forward to the results of this first trial and how that will inform future efforts.”

The whales rely on echolocation and sound to find food. They communicate and coordinate hunting maneuvers with their pod by emitting a clicking sound that travels through the water and bounces back when it hits something. Noise from vessels, particularly when they are moving fast, interferes with the whales' use of sound to find and catch salmon prey. That threatens the 73 whales left in the population after three deaths and two new calves born in 2022.

NOAA Fisheries’ scientists Marla Holt and Jennifer Tennessen used digital acoustic recording tags attached to the whales with suction cups to record their movement while hunting. A pair of underwater microphones picked up sounds from the whale and other sources, including vessels. They found a relationship between underwater noise and the odds of the whales capturing prey. The greater the speed of nearby vessels, the lower the chances the whales captured prey. Another key finding indicated that vessel noise affects whale foraging when boats approach within 400 yards. Additional, larger scale investigations have verified these results.

Holt says, "Findings from our suction-cup tagging study revealed the important interplay between prey available to the whales and disturbance effects from vessels and noise. Increases in fish stocks, for example, would only address part of the problem."

Although we cannot eliminate the ocean noise from human activities, we can reduce it when Southern Residents are in the area. Many whale enthusiasts now view marine mammals from the shore through efforts like The Whale Trail. This program adopts sites from British Columbia to Southern California where visitors can view whales without getting on a boat.

The large cargo ships that are the focus of the slowdown operate in shipping lanes that are exempt from state and federal regulations for vessels viewing killer whales. Washington state law requires those vessels to stay at least 300 yards from Southern Residents and at least 400 yards out of the path of or behind the whales. They must also slow to less than 7 knots within a half mile of the whales. A collaborative campaign, Be Whale Wise, promotes these laws that are enforced by NOAA’s Office of Law Enforcement and state and federal partners like the Coast Guard and Washington Department of Fish and Wildlife.

How You Can Help Ship Operators

Quiet Sound’s new trial aims to provide a proof-of-concept for a commercial shipping seasonal slowdown in Washington to reduce sound through voluntary changes to vessel operations.

sightings through Orca Network, The Whale Museum, the WhaleReport app or the Whale Alert app. Both apps are available on Apple or Android devices. One goal is for all whale sightings to reach professional mariners in near-real time through the WhaleReport Alert System. The Quiet Sound program also aims to combine these data and share them with commercial ship crews to help them avoid whales, reducing noise and the risk of vessel strikes.