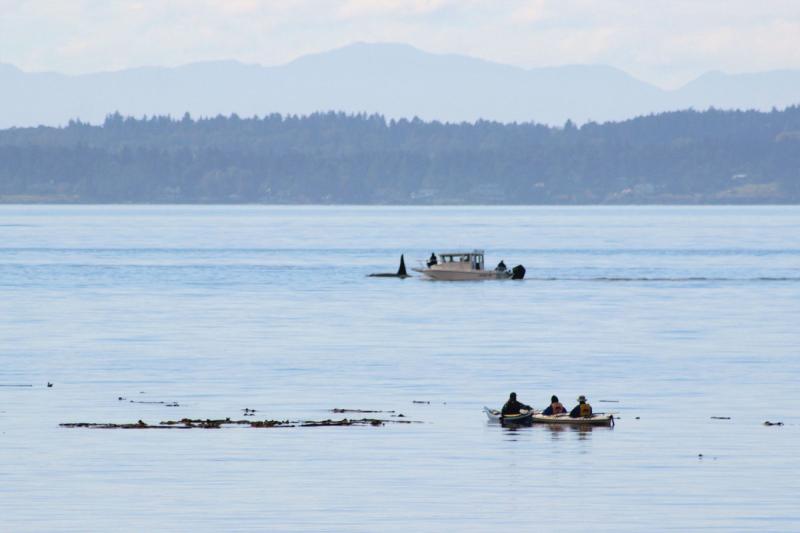 A witness on San Juan Island took this photo of a rental boat approaching endangered Southern Resident killer whales off the west side of the island. NOAA investigators also interviewed the kayak guide who said the boat was under power at the time.

Whale watchers on shore reported the violations through BeWhaleWise.Org, a partnership of agencies and groups that promote viewing regulations. They provided photographs and details that helped enforcement officers identify the boats involved. Officers then contacted the companies that had rented the boats, and the companies identified the renters involved.

“People can help us by spotting suspected violations and providing as much information as they can as soon as possible,” said Greg Busch, Assistant Director of the West Coast Division of NOAA’s Office of Law Enforcement. “It is important for boaters to know the rules before they get on the water. The more people who know the rules and help identify violations, the better protected the whales will be.”

Southern Resident killer whales are an endangered population of killer whales native to the Northwest that has declined to just 73 animals. NOAA Fisheries has named them one of 9 national “Species in the Spotlight”—marine species at high risk of extinction and in need of focused and urgent recovery actions.

In the first case, on September 30, 2021, Monika Wieland Shields reported a yacht off the west side of San Juan Island within 100 yards of J Pod. This is one of the three pods of endangered Southern Residents. Shields, director of the Orca Behavior Institute on San Juan Island, supplied details of the vessel and confirmed that the whales were Southern Residents. Officers traced the vessel to a yacht charter company that had rented it to Brendan Loesback of Entiat, Washington.

Loesback acknowledged operating the yacht too close to the whales. He said he had not been aware of the distance regulations at the time. The rental company had not provided information about the state and federal regulations. These regulations require recreational boats to stay at least 300 yards to the sides of the endangered killer whales and 400 yards in front and behind them. Loesback paid a $300 fine.

Shields said she took photos and video of the vessel and the whales to capture their identifying features. “There are respectful ways to view whales from a vessel, but when there's an intentional and egregious violation, it's very important to report it,” Shields said. “It was difficult to watch, but I'm grateful enforcement was able to follow up to make sure that such disregard for the whales has consequences.”

Regulations mandate viewing distances and require that vessels slow to less than 7 knots within a half nautical mile of the whales and disengage engines within 300 yards. Research has shown that boat traffic within an average of 400 yards interrupts deep-water foraging by the whales that includes capturing prey. Female whales may stop foraging when boats approach that closely. That can undermine the survival of the whales already challenged to find enough of the salmon they largely prey on.

In the other case, on October 4, 2021, two witnesses identified a recreational boat operating less than 200 yards from the whales and provided photographs. NOAA enforcement officers also talked with a kayak guide visible in one of the photographs. He confirmed that the boat had approached within 100 yards of the whales and had engines running.

Officers tracked the boat to an Anacortes boating club that provides access to boats similar to a timeshare. The company had provided information on whale viewing regulations, including a whale warning flag and QR code linking to an educational video. However, the renter, Christopher Brawn of Roslyn, Washington, told officers he had not looked at the information.

Brawn acknowledged operating the vessel but denied wrongdoing, saying the engine was off near the whales. Officers noted that photographs showed the boat creating a wake, indicating it was moving forward.

Brawn was assessed a penalty amount of $3,000. He accepted a settlement agreement in which he admitted liability in exchange for paying a reduced penalty of $2,700. The different fines reflected differences in how each boat encroached on the endangered whales. For example, the larger fine was associated with approaching the whales more closely over a longer period.