Agency seeks information for review under the Endangered Species Act. 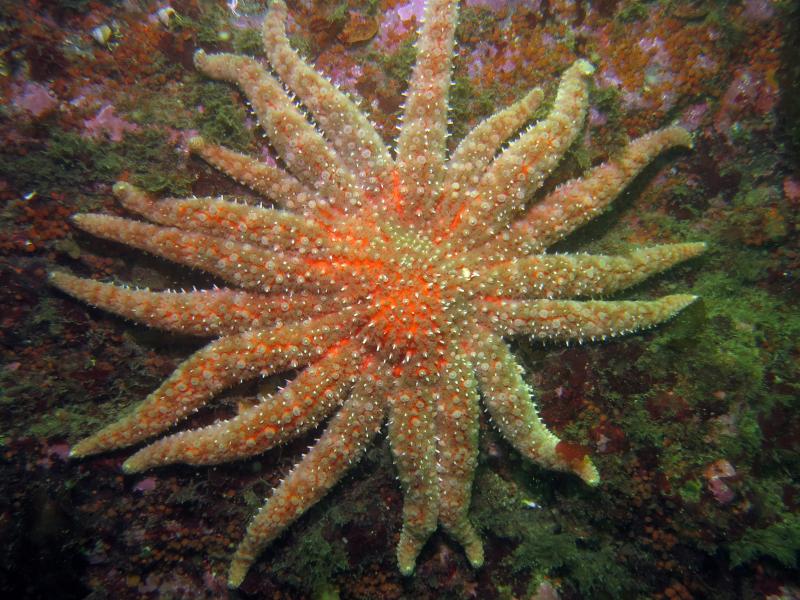 NOAA Fisheries is seeking information about the sunflower sea star, Pycnopodia helianthoides, a large sea star native to the West Coast. We are trying to determine whether the species warrants listing under the Endangered Species Act. The sea star has declined in the last decade in association with sea star wasting syndrome, likely worsened by warmer ocean conditions.

The sunflower sea star measures up to 3 feet across, making it the second largest sea star in the world. The species most commonly inhabits shoreline and intertidal zones up to depths of about 400 feet. Its range stretches from Alaska south into Mexico, but its numbers have dropped substantially at the southern end of its range, from Washington to Mexico.

The Center for Biological Diversity petitioned NOAA Fisheries in August to list the sunflower sea star as threatened or endangered under the Endangered Species Act. Based on initial review, NOAA Fisheries determined that the petition presents substantial scientific or commercial information that listing may be warranted.

The next step outlined in the law is for the agency to conduct a thorough status review to assess whether listing is warranted. This review will consider the current status of the species and threats to the species.

NOAA Fisheries scientists are soliciting scientific and commercial information on the distribution, abundance, and status of this species, as well as information regarding factors affecting the species or its habitat. The status review will be based on the best scientific and commercial information available to determine whether the species needs protection under the Endangered Species Act. The review must be completed by August 2022, one year after the petition was received.

Information can be submitted by email to David Lowry (david.lowry@noaa.gov) or, for Alaskan waters, Sadie Wright (sadie.wright@noaa.gov). See the Federal Register

In August 2021, the International Union for the Conservation of Nature added the sunflower sea star to its Red List, classifying the species as critically endangered. The IUCN assessment noted that an outbreak of sea star wasting syndrome may be causing the deterioration and death of sea stars. The syndrome is linked to warmer ocean conditions in the eastern Pacific Ocean in the last decade.

A series of marine heatwaves, beginning about 2013 with a large heatwave known as “The Blob,” have pushed up temperatures in the eastern Pacific Ocean.

Surveys by divers and trawl vessels have found 80 to 100 percent declines in sunflower sea star abundance across nearly 2,000 miles of its range in Washington, Oregon, and California, according to peer-reviewed research. The outbreak of sea star wasting syndrome coincided with the heatwaves and has affected other sea stars, but none as severely as the sunflower sea star.

Studies have found cascading ecological effects following the removal of native species from kelp forest ecosystems across much of the West Coast. The decline of large sea stars that prey on sea urchins may lead to massive increases in urchin abundance. The numerous urchins graze on kelp. This can in turn contribute to the loss of kelp forests that provide habitat for many other ecologically and commercially important species.