The OceanAdapt Website: Tracking Fish Populations as the Climate Changes

As the oceans warm, fish populations are on the move. A new online database that tracks their movements should help fishermen and fishery managers to adapt.

Few people see the effects of climate change as clearly as fishermen. As the climate changes and the oceans warm, fish are moving in search of cooler water, and this can have a big effect on fishermen’s livelihoods. For some, the evidence of climate change turns up in the net, such as when they catch longfin squid in the Gulf of Maine, far north of the usual range for that species. For others, the evidence is in what they’re not catching. Lobstermen in the Long Island Sound, for instance, have had little to catch since the valuable species that once supported them headed up the coast. Winter flounder, silver hake, and black sea bass have all shifted north as well.

These are just a few examples from the East Coast, but a study released last year that looked at more than 350 species from all over North America found that many are moving, and that their movements closely track changing ocean temperatures.

“We found that all over North America, marine fish and invertebrates are shifting their distributions quite rapidly,” said Malin Pinsky, a biologist at Rutgers University and the lead author of the study, which compiled data from more than 40 years of surveys conducted by scientists at NOAA Fisheries, Canada’s Department of Fisheries and Oceans, and other organizations. Those surveys were designed to produce estimates of fish abundance that managers use when setting catch limits.

But even though few people were thinking about climate change when those surveys were originally designed, they turned out to be a treasure trove of data for tracking the effects of a changing climate. “These data show where marine fish and invertebrates have been, and where they’ve moved, over the last several decades,” Pinsky said.

In the year since that study was published, Pinsky, in collaboration with NOAA Fisheries, has built a website called OceanAdapt that makes that trove of data, which had been scattered and difficult to access, easily available to the public. Users can search and download data on the geographic and depth ranges of more than 650 species of fish and invertebrates and track how those distributions have changed over time. This will be a valuable tool for the fishermen, fishery managers, and scientists who are grappling with the challenge of adapting to a changing climate.

Black sea bass are important to both recreational and commercial fishermen on the East Coast, and each state gets a fixed share of the total catch. That catch was divvied up based on where black sea bass were in the late 1980s and early 1990s. At that time, the fish were most abundant off North Carolina, so that state got the largest share of the catch. Since then black sea bass have moved, but the regulations haven’t caught up. Today, New England fishermen are catching black sea bass as far north as the Gulf of Maine. Meanwhile, North Carolina fishermen often have to motor far north to fill their quota, with the extra fuel costs eating into their profits.

“Our fisheries regulations are built around the idea that fish distributions don’t change very much. When they do, that makes things complicated for fishermen and for managers trying to maintain a sustainable fishery,” Pinsky said.

But changing fishery regulations to reflect today’s conditions won’t be easy, in part because any redistribution will inevitably leave some states with less than their historical share. What’s more, fishery regulations exist to prevent overfishing, and in that respect they have worked—36 stocks have been rebuilt in U.S. waters since 2000. For that track record to continue, any changes to fishery regulations must be made with great care.

“How do you make the regulations effective and yet flexible?” asked Pinsky. “That’s one of the big challenges ahead.” 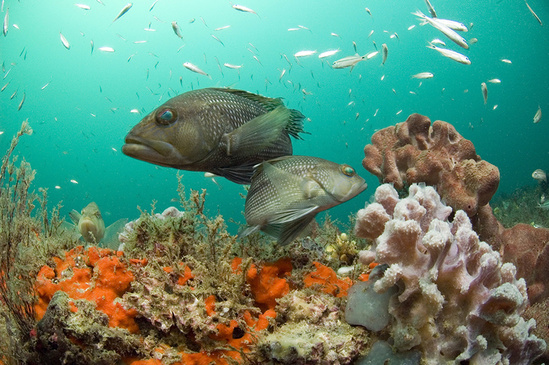 To strike the right balance between effectiveness and flexibility, we need to base our policies in sound science. To do that, we need reliable, up-to-date information on changes in ocean conditions. Fish distributions are a key indicator of how climate is affecting the ocean, and the OceanAdapt website makes that information widely available. This will help scientists and fishery managers keep a finger on the pulse of the ocean.

In addition, we need to be able to predict how these changes will affect fisheries and ecosystems. For example, one key question that scientists are asking is how marine food webs reorganize as species distributions shift. Although many species are moving, they’re not moving in lock step, and as predators become separated from their prey, the effects will reverberate through the ecosystem in unpredictable ways. Researchers can use the OceanAdapt database to investigate these changes and develop early warning systems that can alert us to impending disruptions.

This database will also help scientists understand the cumulative impacts of fishing and climate change. These are two of the most significant ways that humans influence marine ecosystems, but scientists don’t have a good understanding of how these two effects interact and combine. “If we’re not careful, we might end up compounding the effects of climate change through overfishing,” Pinsky said.

But the effects won’t all be negative. As some species move out of their historical range, others may come in to take their place. The key to adapting will be to have flexible regulations that are grounded in sound science.

“We don’t foresee a catastrophic collapse,” Pinsky said. “But there will be fundamental and large-scale changes that we have to prepare for if our fisheries are to remain stable and healthy.”

With the OceanAdapt website, we’re one important step closer to that goal.

Last updated by Office of Communications on May 04, 2021