Protections safeguard turtles in U.S. waters while risks remain across the Pacific. 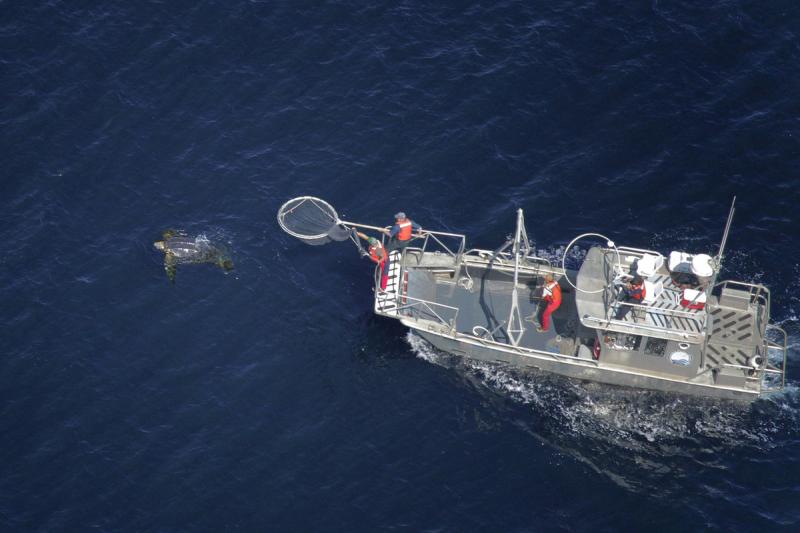 Scientists follow a Pacific leatherback turtle in waters off the U.S. West Coast. The endangered turtles migrate 7,000 miles across the Pacific Ocean to feed on jellyfish off the coast of North America. Photo credit: Joel Schumacher/NOAA Fisheries.

Enormous Pacific leatherback turtles are so ancient they lived with the dinosaurs. Now a new survey shows that leatherbacks that forage off the U.S. West Coast are trending towards extinction in as little as a few decades.

These endangered turtles are the largest living turtles, weighing up to 1,500 pounds. They are fully protected in U.S. waters, likely the safest waters they traverse in their cross-Pacific migrations. After feeding on jellyfish and growing in U.S. waters, adult turtles migrate back west across the Pacific Ocean to beaches in Indonesia and Solomon Islands. That’s where they reproduce and females lay their eggs.

Biologists fear illegal, unregulated, or insufficiently regulated fishing on the high seas may catch and kill many leatherbacks on their year-long treks across the ocean. They also suffer from poaching and loss of habitat in their nesting areas.

“Probably the safest place for Pacific leatherbacks is in the West Coast Exclusive Economic Zone,” said research biologist Scott Benson of NOAA Fisheries’ Southwest Fisheries Science Center. The Exclusive Economic Zone is the area where U.S. laws apply to 200 miles offshore. “It’s what happens in all of the other waters they are swimming through that really worries us.”

Benson is lead author of the new study of western Pacific leatherbacks, one of two populations of leatherback turtles in the Pacific, published last month in Global Ecology and Conservation. 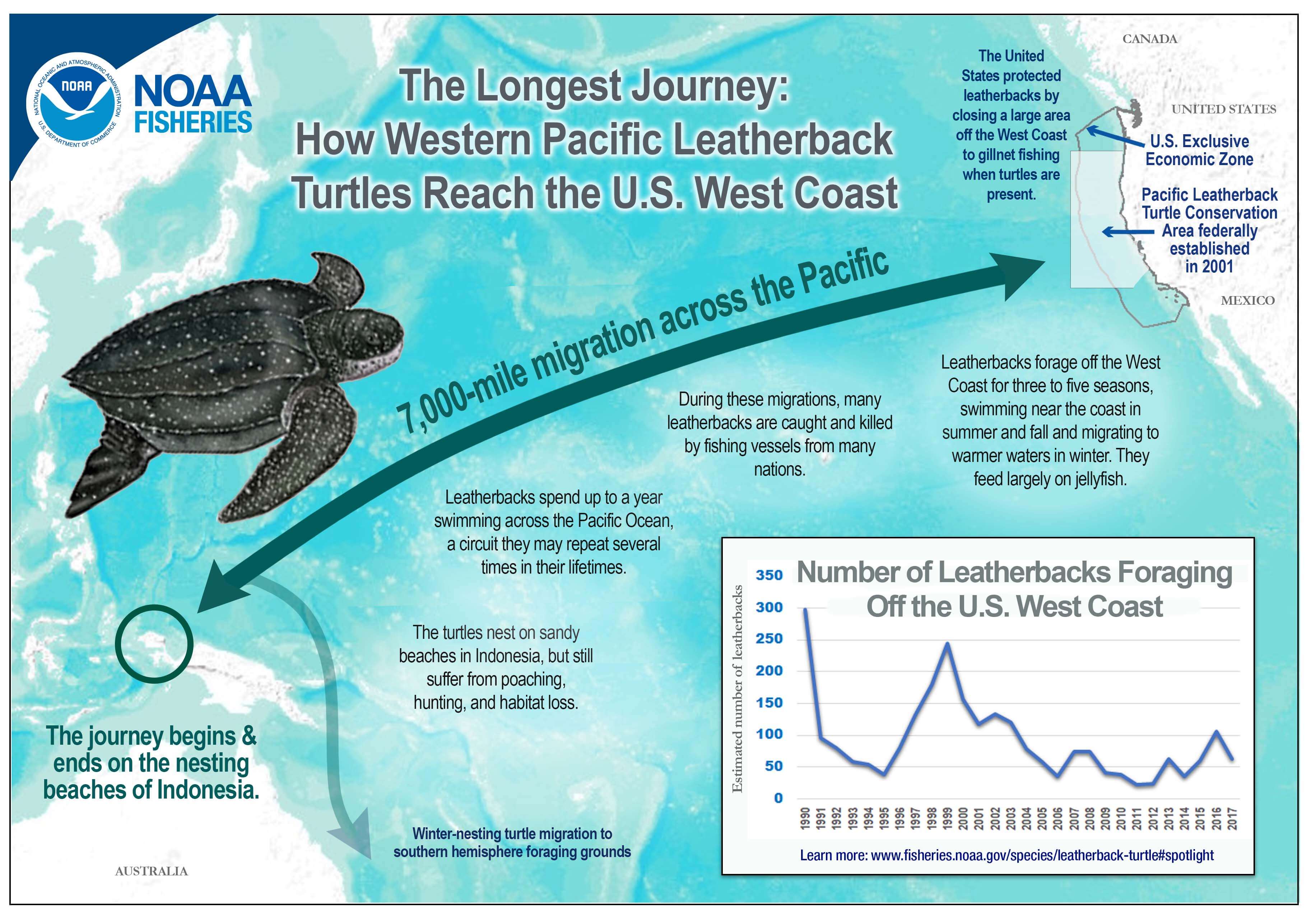 Pacific leatherback turtles are one of nine national Species in the Spotlight that NOAA Fisheries designated in an effort to bring additional focus to recovery efforts. The United States has enacted regulations to reduce the accidental capture, or bycatch, of Pacific leatherback turtles in U.S. fisheries. It has supported protections at leatherback nesting areas and conducted research to unravel the sources of mortality. NOAA expects to release an updated Action Plan that outlines priority measures to save the species in early 2021.

The Endangered Species Act protects leatherbacks in U.S. waters. The Pacific Leatherback Conservation Area established off California and Oregon in 2001 prohibits drift gillnets each August through November when leatherbacks are most likely present. The turtles often spend summers near the West Coast, wintering in warmer waters toward Hawai’i, before returning to their nesting beaches in Indonesia.

Given the travel time of nine to eleven months, they make the round-trip to their nesting beaches every three to five years.

Aerial surveys beginning about 1990, originally intended to count harbor porpoises, also counted leatherbacks. The turtles forage off the West Coast for their preferred food: abundant jellyfish known as brown sea nettles. The survey data reveal that leatherback numbers off the West Coast have declined about 5.6 percent per year since 1990, an overall drop of about 80 percent.

Biologists estimated an annual average of about 128 leatherback turtles foraging off Central California from 1990 to 2003. That number dropped to an average of about 55 per year from 2004 to 2017. The trend closely matches the decline in leatherback numbers at nesting beaches in Indonesia. It reflects a close relationship and intermingling of Pacific leatherbacks that follow different foraging patterns throughout the Indo-Pacific region.

“In short order these animals are going to be gone if things don’t turn around,” said Jim Harvey, director of Moss Landing Marine Laboratories/San Jose State University in Monterey Bay and a coauthor of the new study. “You can’t just protect them in one location. You have to protect them across half the globe.”

Biologists tagged several leatherback turtles to track their migration and behavior, such as how much time they spend underwater. Cameras fitted on some of the turtles also confirmed that their diet leaned heavily toward brown sea nettles. These data help to better estimate the total number of turtles in the survey area.

When tagging leatherbacks that approach 1,500 pounds, Harvey said, “you get the feeling that you are looking in the eye of an animal that is truly prehistoric.”

NOAA Fisheries’ most recent status review earlier this year estimated that the western Pacific population of leatherbacks included about 1,277 nesting females. Their overall numbers declined about 6 percent per year from 2001 to 2017. Roughly 40 to 60 percent of the Western Pacific turtles make the long-distance migration to U.S. West Coast feeding grounds. Others forage near the Philippines, Malaysia, and in the central North Pacific.

Their numbers have dropped more than 80 percent since the 1980s.

The U.S. West Coast drift gillnet fishery for swordfish inadvertently caught and killed an average of 10 to 25 leatherbacks a year until 2001. That bycatch subsequently dropped to fewer than two leatherbacks a year following the establishment of the Pacific Leatherback Conservation Area. The Hawai’i-based longline fishery for swordfish in the central North Pacific requires fisheries observers on all vessels and has adopted other protective measures. These include hooks less likely to catch turtles and the use of dehooking devices to help safely release turtles that are unintentionally caught.

Consumers can help protect leatherbacks by buying seafood from fisheries that take precautions to avoid turtles and other protected species. For example, U.S. swordfish fisheries have reduced inadvertent catches of turtles, while many foreign fisheries have not. The public can also reduce use of plastic bags, balloons, and other items that leatherbacks can mistake for the jellyfish they eat.

It may seem hard to believe that the leatherback turtles can grow to such a massive size on a diet of diaphanous jellyfish that are mostly made up of water, Harvey said. However, biologists studying the tagged turtles found that they eat only the most nutritious parts of the jellyfish, maximizing their energy intake.

“They had developed a strategy that worked very well for them for a long, long time,” Benson said. “The challenge now is giving them a real chance to use that strategy again to recover from past impacts.”