R5AY: Honey Girl's Story of Struggle and Salvation in Paradise 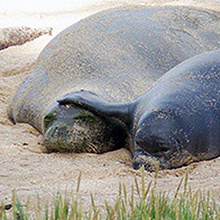 Notable Facts: A long-time resident of Oʻahu whose life was saved after she was seriously injured and nearly starved due to a fishery interaction.

The monk seal of the month for July is R5AY, also known as "Honey Girl."

R5AY is a long-time, highly revered resident of Oʻahu North Shore, where she has become one of the islands best known mother seals. She was first identified as an adult seal in 2002, so she was likely born in 1997 or earlier (monk seals rarely attain adult size prior to age 5 years). Since we've known her, Honey Girl has given birth to 10 pups, 8 of which are female. Given that the chances of giving birth to males and females should be equal, Honey Girl is truly a seal that defies the odds! 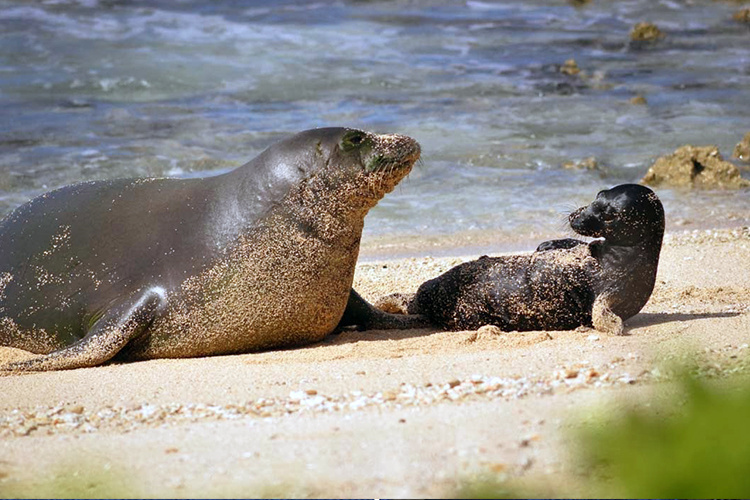 When monk seals get hooked or entangled in active fishing gear, it's called a "fishery interaction." A recent study by NOAA scientists found that at least 28% of monk seals in the main Hawaiian Islands have had a least one run-in with nearshore fishing gear â€” and this is a minimum because some interactions are not observed or reported. The overwhelming majority of these interactions were hookings, often involving large circle hooks on slide bait rigging used to catch ulua (large jacks). Some seals have an especially high proclivity for fishery interactions, becoming hooked multiple times over the course of their lives. Honey Girl and her family definitely fit the fishery interaction profile.

In November of 2012, kiteboarders called NOAA to report a dead seal off the coast of Oʻahu, after they noticed it in the same spot two days in a row. But there was something peculiar about this report: A dead seal would be expected to drift with the current and waves until sinking rather than hang at the surface in the same spot for a long time. NOAA obtained coordinates from the kiteboarders and searched for the dead seal to no avail.

A few days later, Honey Girl was found on a North Shore beach. The initial report suggests she was hooked and the line anchored her to the bottom of the ocean floor, but the line was long enough for Honey Girl to breathe at the surface. The "dead" seal reported earlier that week must have been her.

When NOAA got to Honey Girl on the beach, she was alive but starved: her ribs and hips were showing, and her skin was wrinkly and sagging over her wasted body frame. She had a hook in the left side of her lip and fur that was covered in algae, indicating she had been floating in the water for an abnormally long time. If the line hadn't been long enough for Honey Girl to reach the surface to breathe, or if she hadn't finally been able to break the line and swim to shore, she would have surely died. In that sense, Honey Girl was lucky, but she must have suffered terribly as she was slowly starving while tethered to the bottom of the ocean by a hook in her mouth. 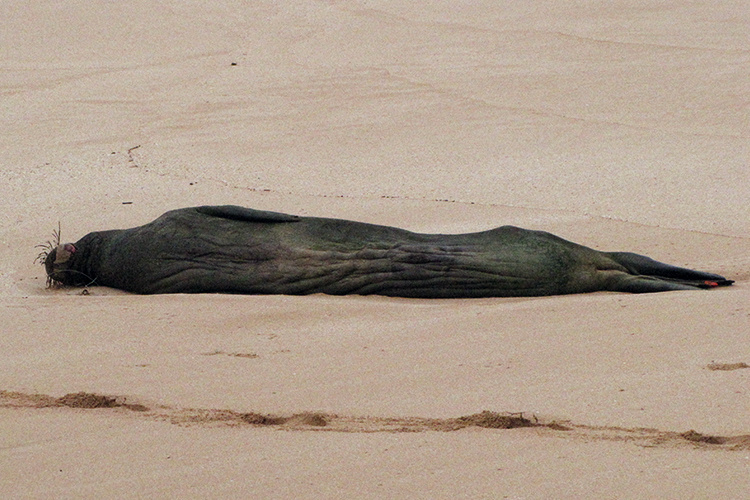 Fishery interactions can become life threatening, such as when a hook is swallowed or causes infection that requires medication or rehabilitation. Honey Girl required medical intervention mainly due to her emaciated condition and physical damage from the fishing line attached to the hook.

NOAA brought Honey Girl to the Waikīkī Aquarium for treatment and rehabilitation. She weighed 345 pounds, far less than the 500 plus pounds she would be expected to weigh as a healthy adult female. As soon as the NOAA veterinarian examined her, she knew something was very wrong with the seal.

The line from the fishing gear was wrapped around Honey Girl's tongue, causing her tongue to swell and decay inside her mouth. In fact, her tongue was so damaged that she was unable to eat. Her body condition and poor overall health indicated the line had been wrapped around her tongue for an extended period of time and had nearly severed it.

Veterinarians had to remove almost a third of Honey Girl's tongue. They hadn't seen this type of injury in a monk seal before, nor had they ever performed such a surgery in a seal. They were unsure whether or not Honey Girl would have enough tongue left to catch and swallow her prey—a potential death sentence.

The Honolulu Zoo provided a surgical facility for the procedure. Anesthesia and surgery in diving marine mammals is risky, but Honey Girl made it through and was taken back to the Waikīkī Aquarium for further care.

She refused the fish offered to her in the days following surgery, but her condition was so wasted that she needed to get calories soon. Local veterinarians and NOAA staff cared for her round-the-clock, providing her with some mashed fish in a stomach tube, medicine, and fluids for hydration. But she became increasingly irritable and made it very difficult for her caretakers to help her.

Miraculously, on Thanksgiving Day, Honey Girl ate. And from that day forward, she ate everything she was given. After 2 to 3 days of eating, she was still quite underweight but her ability to eat and her spunky behavior indicated she was on the mend.

After 13 days of rehabilitation, she was healthy enough to return to the wild—for such a severe injury and weight loss, this recovery was a rapid turnaround. But Honey Girl has a history of being a successful forager, so experts determined that she would gain weight faster and with less human influence if she was set free. Also, because she was such an Oʻahu homebody, NOAA was confident she would be seen regularly so her progress could be monitored. 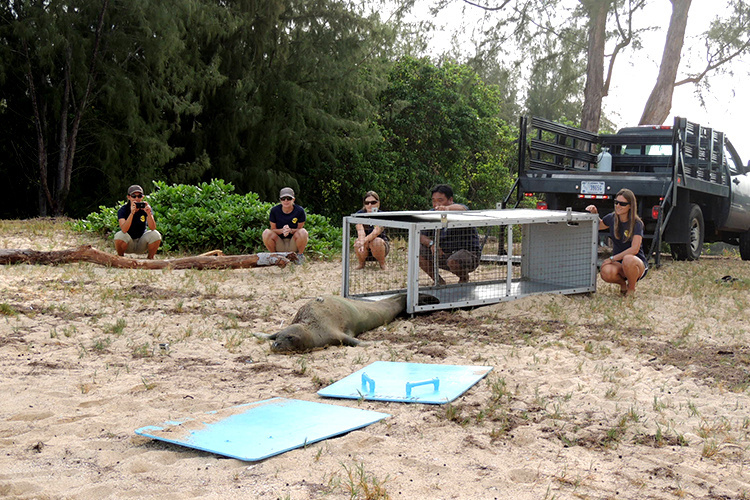 For months after her release, volunteers watching Honey Girl reported slow but steady weight gain. The following year, she took a much-deserved year off from pupping but was successful in foraging with her modified tongue and eventually regained her normal weight.

Though Honey Girl continued to prosper post-surgery, her fishhook woes weren't over. In 2016, she was found with another hook in her lip on the west side of Oʻahu. Luckily, this hooking wasn't life threatening and NOAA was able to remove the hook on the beach and release her right away. 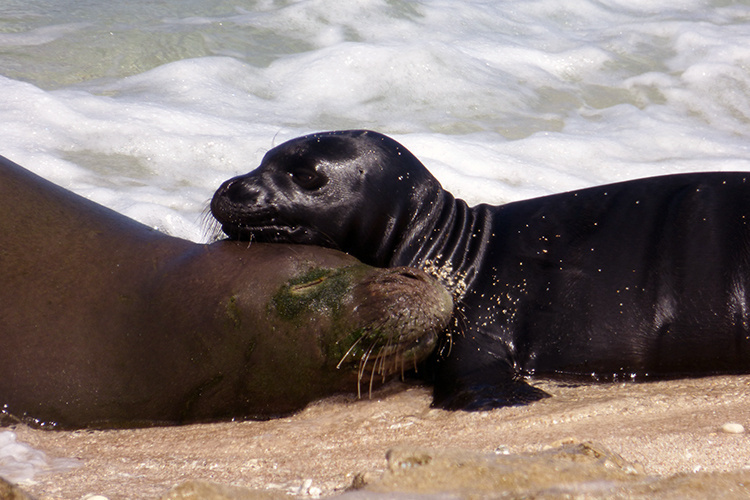 Honey Girl has had three pups since her surgery, demonstrating both the amazing resilience of monk seals and how saving female seals pays dividends in terms of future offspring. Unfortunately, Honey Girl's kids have had their own, sometimes deadly, interactions with fishing gear.

Fishing gear was officially responsible for killing two of Honey Girl's offspring and may have played a role in the death of a third. Honey Girl's second pup, female RO32, was found dead in a gillnet off the coast of Oʻahu in 2006. The necropsy (animal autopsy) indicated that she most likely drowned. Two years later, Honey Girl would lose one of her sons. While experts couldn't determine the cause of death of this seal, his body had light indent marks that followed the same pattern of a net. In 2015, Honey Girl's daughter, weaned pup RG03, swallowed a hook that caused severe injuries from which she couldn't recover, even after NOAA surgically removed the hook.

Fortunately, fishery interactions weren't always fatal for Honey Girl's family. One of her daughters, RL54, had a circle cook imbedded into her left cheek â€” with some difficulty NOAA successfully removed the hook on the beach and RL54 went on her way. Another daughter, RT10, had a small hook in her back that also required an onsite removal. Even Honey Girl's grandson, RG40, who was born in 2015, has already been hooked twice in his short life! Luckily, both of those incidents were minor and the hooks were removed.

Honey Girl's story demonstrates both the opportunities and challenges of monk seal conservation in the main Hawaiian Islands. On the one hand, the seals are incredibly resilient and are living in habitat where their needs for food and resting beaches are met. Yet, the seals are still vulnerable to dangerous fishery interactions, especially when they are young. More education on how to avoid hooking or entangling seals, use of barbless hooks, developing new tools and techniques to remove hooks, and timely reporting of fishery interactions will help mitigate these threats and ultimately aid monk seal recovery in the main Hawaiian Islands.