The new findings show that the range of these shark relatives extends farther north than previously known. 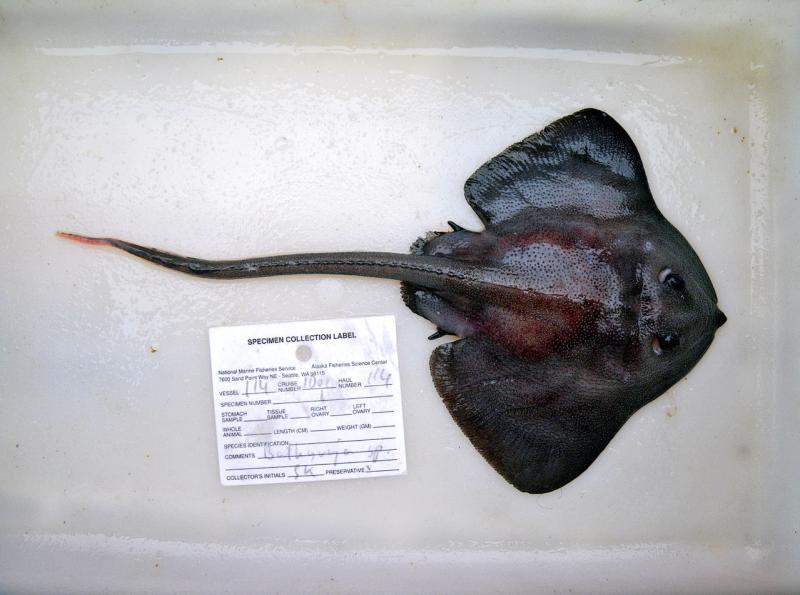 Two rare, deep-dwelling skate species have been recorded for the first time in Alaska and British Columbia waters: the fine-spined skate and the Pacific white skate.

Sharks and Skates: How are They Related?
Skates are sometimes called "flat sharks." They are all elasmobranchs: fish characterized by their cylindrical or flat bodies, five to seven-gill slits, and toothlike scales.Their skeletons are made of cartilage instead of bones.

Only a few specimens of these two species have ever been collected by scientists at locations, ranging from Costa Rica to Washington State.

That was until a young male skate came up in a deep trawl during a survey of the Bering Sea Slope.

“Jerry Hoff, an expert on Alaska skates, was on board and saw immediately that this was something different,” said research leader Jay Orr. Both Hoff and Orr are biologists at the Alaska Fisheries Science Center. “But we had to wait to identify it until we had a geneticist to work with.” 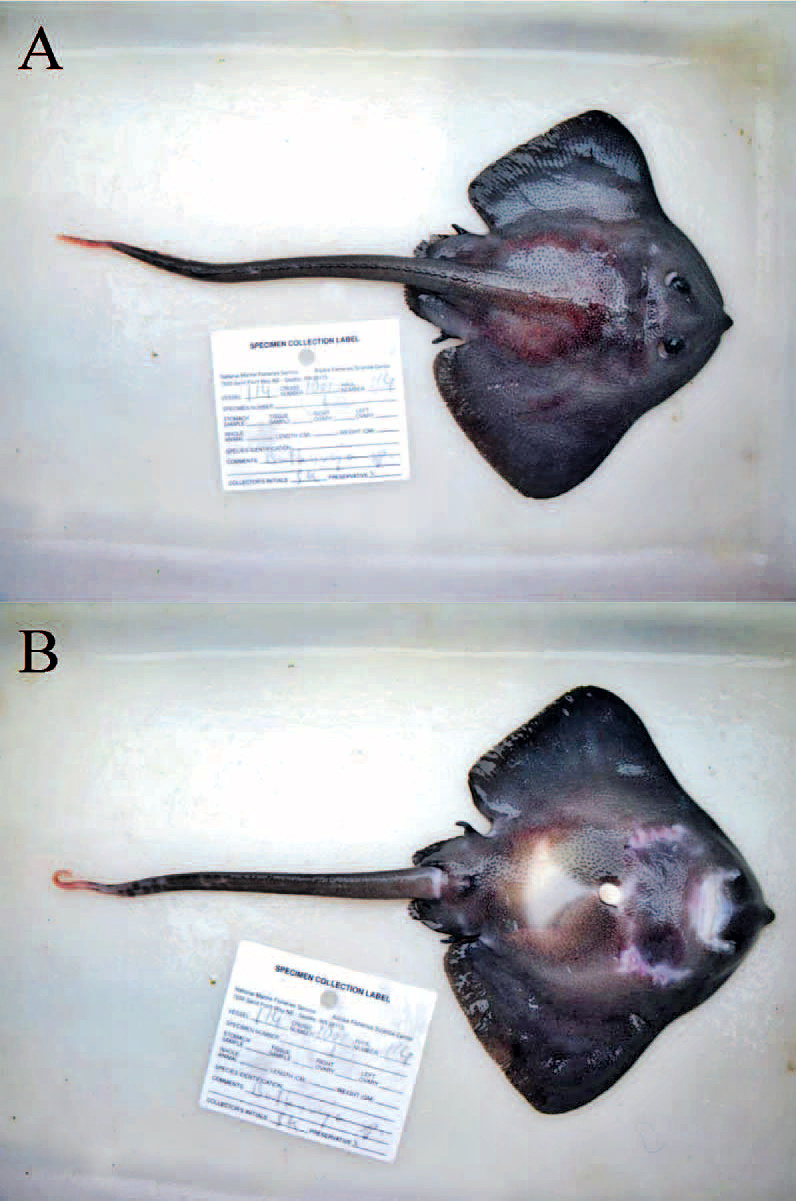 Top and bottom views of the new specimen of Bathyraja spinosissima, the Pacific white skate, discovered at 1066 meter depth in the Bering Sea, Alaska.

“It’s an exciting collaboration,” said Orr. “In recent years we’ve developed a strong relationship with the Royal British Columbia Museum. We’ve been working together in the Salish Sea and Alaska as well.”

“Skates are difficult to identify because they are all morphologically similar: flat and dully colored. The only characters we can use to identify them are thorns on the dorsal side and some general color patterns. So genetics provide a lot more information to differentiate species. Ingrid had already barcoded all of the 15 known skate species in Alaska. She could genetically confirm our identifications of the new species.” 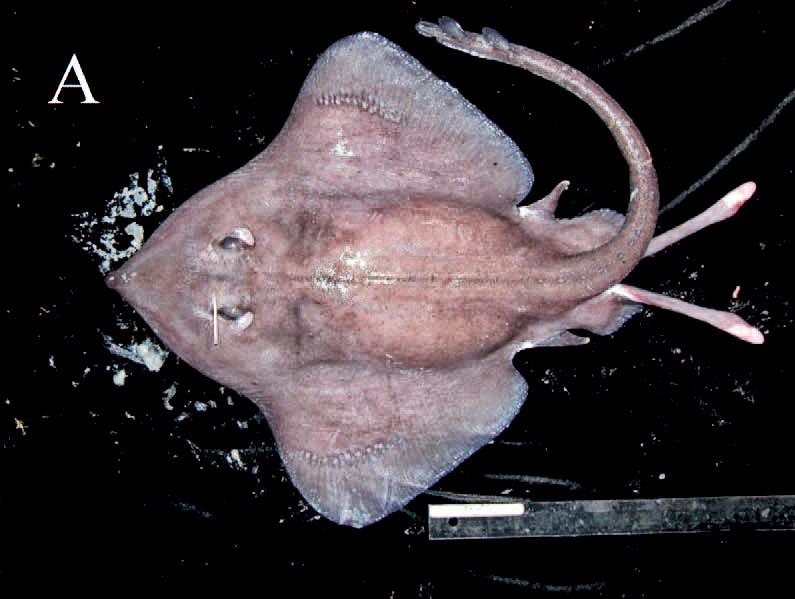 One of five Bathyraja microtrachys, the fine-spined skate, found at 1951 meter depth off British Columbia, Canada.

The team identified the juvenile male skate from the Bering Sea as a Pacific white skate.

“We compared our specimen with the first specimen that was used to describe the species, a juvenile from off Costa Rica that was almost the same size as ours. We were able to match the morphology (structural biology) of the juveniles closely,” said Orr. “It was the first record of the species for the Bering Sea and for Alaska.”

Since it was newly hatched, the juvenile Pacific white skate must have been spawned in the Bering Sea, rather than swimming there from somewhere else. The specimen is currently at the Burke Museum Fish Collection in Seattle.

This discovery led to another. The Royal British Columbia Museum had a large male skate in their collection that had been found off British Columbia. It had previously been identified as a different species.

“We made the connection. Ours was a juvenile, and the one from B.C. was a huge male. But when we looked at the morphology, they matched. Genetics confirmed it. It was an adult male Pacific white skate, and a new record for the species in British Columbia,” said Orr.

The five other skates collected off B.C. also set a new record there. They had initially been identified as the Okhotsk skate, a species previously known only from the western Pacific and western Aleutians.

“We were suspicious because they were collected far from the known range of Okhotsk skate and at a much greater depth—more than 1,000 meters deeper. When we finally saw them, we knew they were not the Okhotsk skate,” Orr said. “We worked up the complete morphology for all five specimens, and the Royal British Columbia Museum did the genetics. All five were fine-spined skates—and the first record of the species in British Columbia.”

Orr notes that their preference for great depths may explain why these two species have been so rarely encountered. “Their depth range lies outside the range of most surveys that sample near the seafloor. We typically tow to no more than 1,600 m; these are at 2,000-3,000 m. Even our deepest tows are just at the edge of their distribution.”

Skates in the Ecosystem

Skates are abundant, large, and ecologically important in the Bering Sea and North Pacific Ocean. Significant numbers of skates are caught as bycatch in fisheries targeting other species—enough to potentially affect skate populations.

Knowing what skate species there are and where they live is critical to understanding the ecosystem, and to effectively managing them.

Despite their similar morphology, not all skates are alike. Larger, longer-lived species, for example, could be overfished if not managed separately.

“In the 1990s identifying skates was a big problem. I contacted a world expert on skates, John McEachran from Texas A&M,” said Orr. “He came out to sea with us and developed a key for Aleutian Islands skates, which eventually led to the guide to all Alaska skates by Duane Stevenson, also a co-author on this project. Jerry Hoff had begun the slope survey and realized how abundant and diverse skates are in the Bering Sea. We discovered new species, the butterfly skate and leopard skate, with Ingrid working on genetics, which played a major role in identification.”

The program has continued work to better understand the role of skates in the ecosystem, their reproductive behavior, what nursery areas are important, and which populations need protection—and to make new discoveries.