Faced with accelerating sea level rise and more frequent coastal storms, a vulnerable salt marsh gets a boost through a NOAA-funded resiliency project. 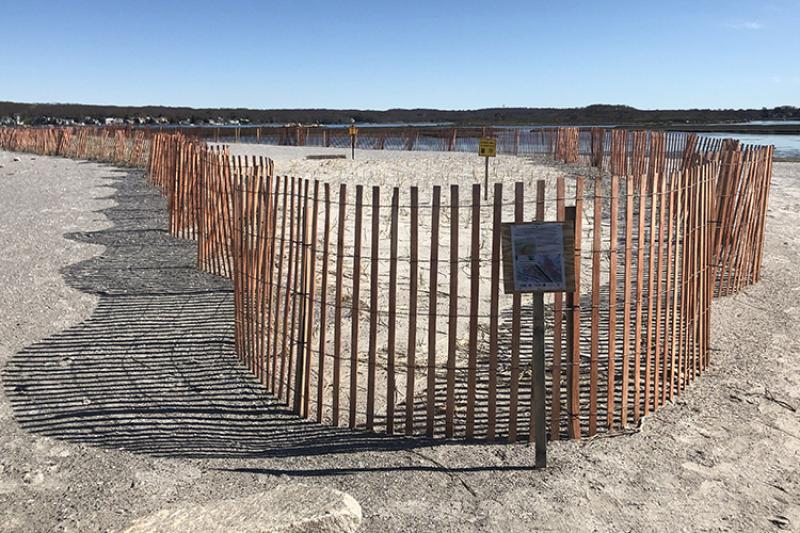 NOAA, partners, and Rhode Island Senators Reed and Whitehouse met last month to share in the success and tour the completed first phase of a salt marsh restoration project at Quonochontaug Pond in southern Rhode Island. By elevating the sinking marsh with a new layer of sediment, partners expect to restore habitat for fish and wildlife. The project will also increase local community resilience to sea level rise and coastal storms. Piping plovers and horseshoe crabs are already making use of the new habitat.

Quonochontaug, or “Quonnie,” Pond is one of nine coastal salt ponds in Rhode Island’s South County region. These salt ponds and salt marshes are extremely valuable to the region. They also provide opportunities for recreation and tourism and serve as important habitat for fish and wildlife. Species like winter and summer flounder, striped bass, bluefish, and scup use the salt ponds for food, shelter, and spawning. Salt marshes also serve as communities’ first line of defense against coastal storms and flooding. 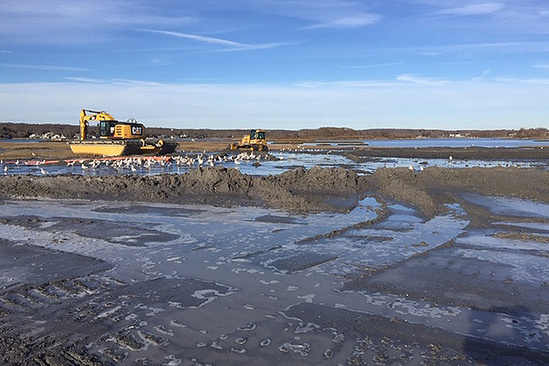 Low-pressure equipment, specially designed for work on soft ground like marshes and wetlands, was used to carefully place dredged soil on top of the existing marsh.

Changing coastlines and sea level rise, however, have threatened the health of Quonnie Pond. In the early 1900s, a man-made channel was constructed to allow tides to flush the pond. But the tides also carried in sand and other sediment. Over time, the sediment filled in the channel, restricted the movement of tides into and out of the pond, and reduced water quality.

Salt marshes are also one of the most vulnerable habitats to sea level rise, especially in the Northeast. Although marshes can trap sediment to naturally increase their elevation, sea levels along Rhode Island’s coasts have been rising more quickly than many marshes have been able to keep up. 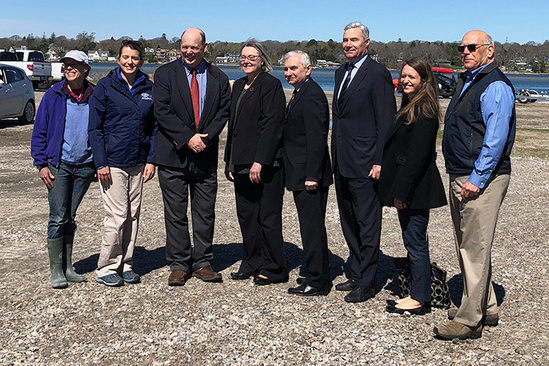 With funding from the NOAA Restoration Center, the Rhode Island Coastal Resources Management Council, Save the Bay, and others collaborated to improve the health and resilience of Quonnie Pond. They restored nearly 30 acres of salt marsh and enhanced three acres of eelgrass beds. Between December 2018 and February 2019, the existing channel and other areas of the pond were dredged, which will help tides to better flush the pond and improve water quality. The dredged soil was then carefully placed on top of the degraded marsh—through a process called “thin-layer placement”—to build up its elevation. In the project’s next phase, native plants will further stabilize the marsh and continue its recovery.

NOAA contributed $982,000 to this $2.2 million project through a 2017 NOAA Coastal Resilience grant award. In addition to the Quonnie Pond project, NOAA has supported more than 70 other restoration projects in Rhode Island and the Narragansett Bay region over the past two decades. Collectively, these projects have restored more than 3,000 acres of habitat and opened more than 50 river miles for migratory fish in the region.

Last updated by Office of Habitat Conservation on May 27, 2019