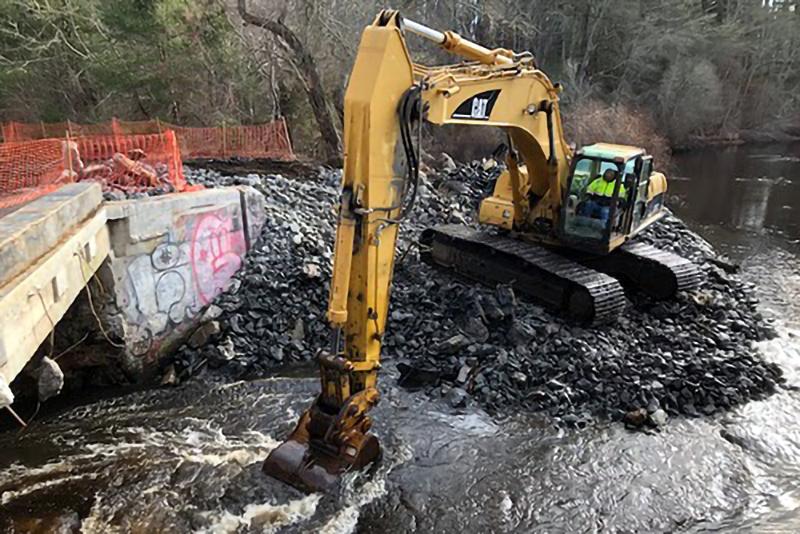 Through strong partnerships, NOAA has continued supporting restoration of habitat and species injured by oil spills and hazardous waste releases in our oceans and waterways in 2020. Two fish passage restoration efforts, one in Massachusetts and another in Maine, are collectively opening up more than 16 stream miles of habitat for migratory fish.

Thousands of barriers to fish migration have been constructed in the Northeast since colonial times. They range from small farmer's ponds and mill dams to impassable culverts under roads. When we remove barriers blocking fish migration, fish can reach more habitat. This helps increase fish populations and can improve local economies and fishing opportunities.

Removing a Dam on the Weweantic River in Massachusetts

Earlier this year, the Horseshoe Mill Dam removal on Massachusetts’ Weweantic River was successfully completed. This important fish passage restoration project was done in close collaboration with partners including the Buzzards Bay Coalition and National Fish and Wildlife Foundation.

Supported by NOAA’s restoration experts, construction crews removed the dam and reconnected the river with its downstream estuary and Buzzards Bay. Blocked by barriers for more than 250 years, the project is expected to open 3 miles of river to river herring and other migratory fish. It will also restore 90 acres of tidal and freshwater wetlands over time.

moving through the system. Wetland habitats are also responding well. Plants are repopulating the floodplain, largely resulting from seeds that were buried in the sediments but now are germinating and growing. Some of these seeds may have been buried for more than two centuries before the dam’s removal!

Ecological recovery in the river and wetlands is very promising so far. Migratory fish species were observed swimming upstream at the site during the spring. Monitoring will continue for at least 5 years.

The project was supported through settlement funds recovered from parties responsible for the Bouchard Barge 120 oil spill in 2003. About 98,000 gallons of oil spilled into Buzzards Bay after the ship ran aground. The oil covered 100 miles of shoreline and injured fish, shellfish, birds and other resources.

Replacing Failing Culverts in the Penobscot River Watershed in Maine

NOAA supported our trustee agency partners at the U.S. Fish and Wildlife Service to fix six road crossings over streams in Maine's Penobscot River watershed. Failing, impassable culverts under the roads have been upgraded to bridges so fish can access more habitat.

This work, also in partnership with the Atlantic Salmon Federation, opens more than 13 stream-miles to migratory fish. The project will improve water quality, reduce risks of flooding and road failure, and increase opportunities for recreational fishing.

Local construction crews replaced the culverts at five crossings on Crooked Brook in Charleston and one on Sucker Brook in Hampden. Each of the new crossings restored the natural stream habitat fish need.

In the past, these crossings regularly flooded, disrupting travel and

causing costly road repairs. The upgrades will lower the risk of flooding—improving resiliency and saving the town money..

A 2016 settlement funded these projects to compensate the public for resource impacts from pollution from former Chevron and Texaco marine oil terminal facilities in Hampden, Maine. A total of approximately 60,000 gallons of oil and gas from multiple spills and their eventual cleanup affected:

Restoring Waterways Across the Country After Pollution

NOAA Fisheries restores, opens, and maintains habitat for fish by removing or finding ways around barriers to fish passage and improving in-stream, floodplain, and marsh conditions. This helps recover threatened and endangered migratory fish and supports the sustainability of economically important commercial and recreational fisheries.

Under the Damage Assessment, Remediation and Restoration Program, federal, state and tribal resource agencies restore species and habitats injured by oil spills and hazardous waste. This is done at no cost to taxpayers. Settlements with those responsible for pollution benefit fish, wildlife, and people. Over almost 30 years, we have recovered more than $10 billion to restore a wide variety of critical habitats and resources nationwide. 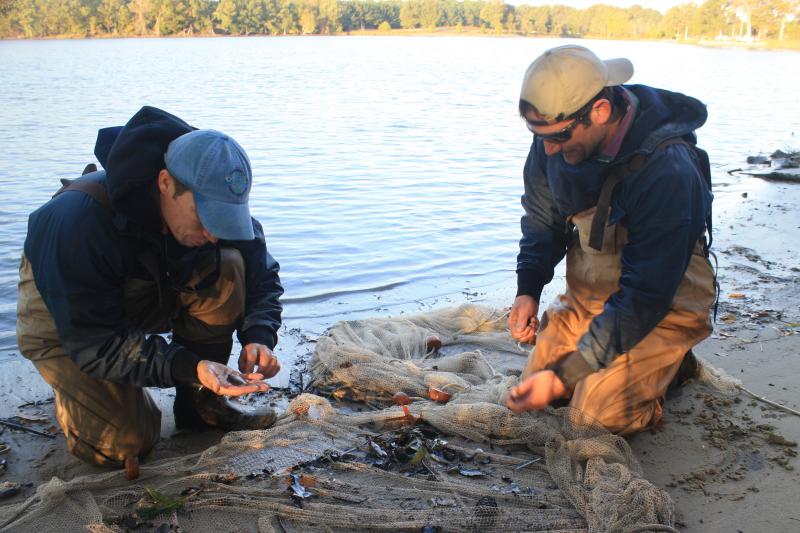 Researchers, like these NOAA scientists, are exploring how changes in habitat can affect different fish species.
More News