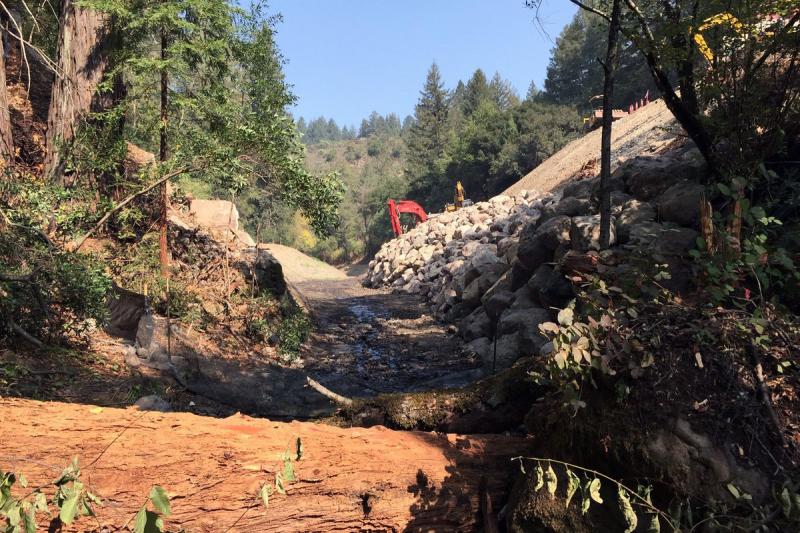 The Napa River in Northern California is a linchpin in the recovery of Central California Coast Steelhead, listed as threatened under the Endangered Species Act. Flowing into San Francisco Bay, the river supports small cities and renowned vineyards. Removal of a century-old dam on a tributary of the Napa River has now increased its capacity to support recovering populations of threatened steelhead, as well.

“For steelhead to recover we need them to return in greater numbers to interior San Francisco Bay,” said NOAA Fisheries West Coast Region biologist, Dan Logan, “and for that to happen we need them to return to the Napa River.” He invested years of his career in the removal of an outdated dam on York Creek that had once provided drinking water to the City of St. Helena. Sediment eventually filled the reservoir behind the dam and the city found a more reliable source of water, making the dam obsolete.

Removal of the dam could provide steelhead access to their historic upstream habitat. Just as important, opening the way for sediment to reach the starved areas downstream would improve habitat conditions and natural stream functions. That would benefit all freshwater phases of the steelhead life cycle.

“The whole watershed will benefit,” said Logan, crediting years of patient collaboration with many partner agencies and organizations for the dam’s ultimate removal. While the dam itself is small, it represents a big step for steelhead recovery. It will likely also benefit other local species such as the foothill yellow-legged frog.

Built in 1900, the dam required increasing maintenance and its reservoir required periodic dredging as it filled with sediment. Eventually the accumulating sediment left little room for water, and a forest began growing in what had been the reservoir. The City of St. Helena developed a reliable source of water to replace the drinking water from York Creek.

There were also some accidental releases of sediment over the years. Combined with potential legal liabilities and continued maintenance costs for an unproductive dam, the City of St. Helena decided to remove York Creek Dam.

Plans for removing the dam to improve fish passage first emerged in 1992, but came and went with little success. Finally, the city secured grants from the U.S. Environmental Protection Agency and the California Department of Water Resources. The funds were set to expire at the end of 2020, which increased the urgency of taking the dam out.

Monthly workshops in late 2019 and into 2020 brought partners together to develop plans for the dam’s removal. These collaborative meetings led to a consensus on the design and approach for removing the dam, drawing on lessons from other restoration and dam removal projects across the West. Partners included:

"This federal, state, and local partnership is a testament to the efforts to bring the threatened steelhead back to the Napa River," said Lisa Van Atta, Assistant Regional Administrator of the California Coastal Office in NOAA Fisheries’ West Coast Region.

One of the most important and challenging decisions was how to handle the sediment backed up behind the dam. Excavate it all? Retain it behind engineered structures? Or allow it to flow naturally downstream?