Live video feed from underwater submersible allows anyone to virtually join the expedition. 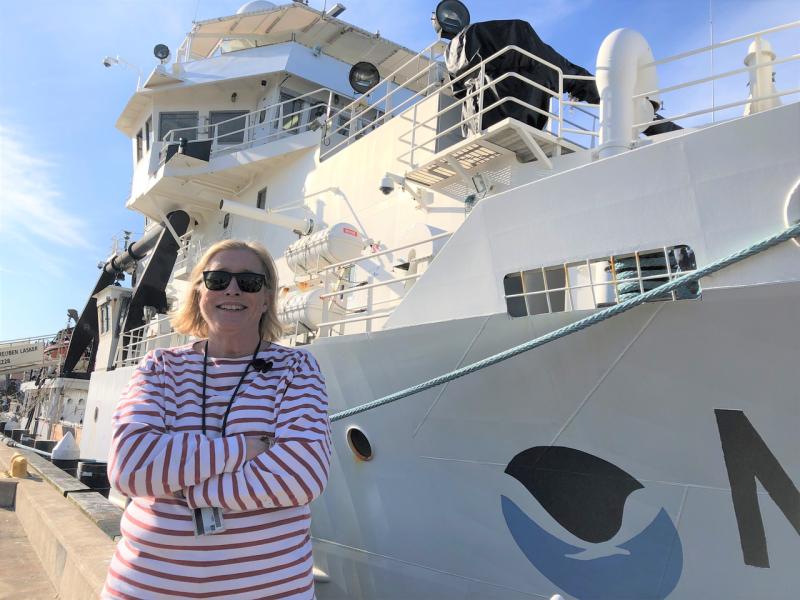 On October 7, a team of scientists and engineers left Newport, Oregon for a month-long research cruise along the West Coast. The expedition, representing collective efforts of three federal agencies led by NOAA Fisheries, will dive deep to explore corals, sponges, and fish habitat on the ocean floor. A live video feed will allow anyone to follow along with the expedition.

The deep sea is home to much of the life in the ocean; it provides habitat for fish and the food that they eat. Among the most unique deep-sea habitats are the communities of corals and sponges. When people think of corals, they often imagine sun-soaked, shallow water reefs. However, recent scientific expeditions have found dense forests of coral and sponge communities in the darkness of the deep sea.

Deep-sea habitats can be difficult for researchers to reach. As a result, we lack a good understanding of deep-sea coral and sponge communities. The current cruise is designed to survey these deep-sea habitats off the coasts of Washington, Oregon, and California.

Research Below the Sea

NOAA Fisheries’ scientists Dr. Elizabeth Clarke and Tom Laidig are co-leading the cruise. They will be joined by researchers from NOAA’s Channel Islands National Marine Sanctuary, the U.S. Geological Survey, and the non-profit Global Foundation for Ocean Exploration. They will travel south from Newport, Oregon to San Diego, California.

Clarke figures she’s spent nearly a decade of her life at sea exploring the ocean. “With every survey I’ve been a part of there’s a frantic flurry of last-minute logistics getting the expedition together and loading the ship,” she notes. “Once we start the expedition, however, things settle down and we start each day excited, wondering what new discoveries we will find.”

Along the way, the ship will be stopping at a dozen different points, including locations within four national marine sanctuaries, to dive to the seafloor. 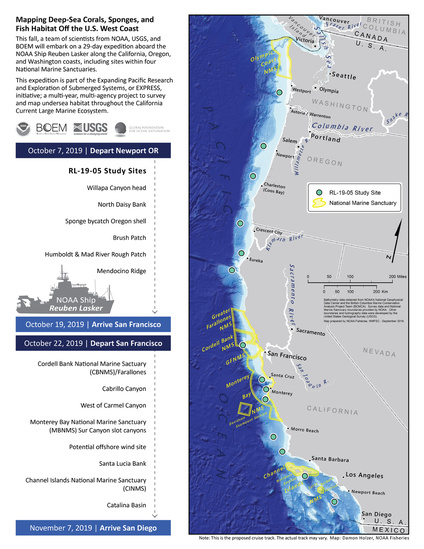 Clarke and her team will not actually be diving into the deep sea themselves. Advances in technology have made it cheaper, easier, and safer to explore the ocean bottom without having to get wet. Instead, they will deploy an array of gear from the ship. The floating base of operations will be the 209-foot NOAA Ship Reuben Lasker; a state-of-the-art fisheries research vessel packed with advanced sampling technologies.

Advanced Technologies Connect Researchers at Sea with Those on Shore

Some of the most helpful technology they’ll use are two types of underwater robots.

The first is an autonomous underwater vehicle, or AUV. The AUV is essentially an underwater drone that follows a pre-programmed course. The AUV will run transects, or lines, across the ocean floor taking pictures and documenting what it sees. Submersibles like this are an efficient way of covering a lot of area and getting a lot of data.

Processing all those images is typically done by researchers who review each frame. However, the researchers on this cruise are testing new software that would allow a computer to analyze the images. It will process the images more quickly and efficiently and help identify the sponges and corals it “sees.”

The researchers will also use a remotely operated vehicle, or ROV, owned and operated by the non-profit Global Foundation for Ocean Exploration. Named Yogi, this submersible is connected to the ship by a series of cables and is actively operated by a pilot aboard the ship. The ROV allows researchers to adjust in the moment to zoom in on any interesting features or animals they may find in the deep sea. The ROV can use a manipulator claw to collect and stow seafloor samples, such as corals or rocks. These can then be analyzed more thoroughly back in the laboratory.

It’s not just the researchers at sea who will be watching. The ship will beam back a live video feed from the ROV’s camera. A team of shore-based researchers will track the expedition over the internet and offer their expertise. 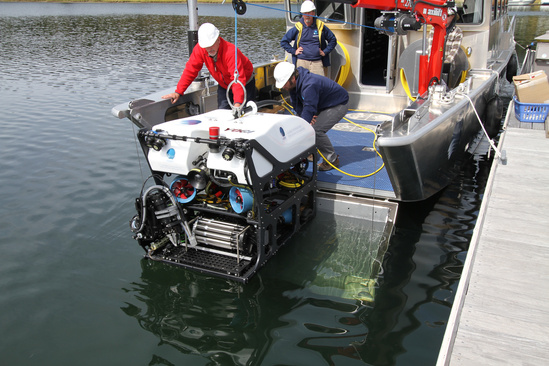 The same feed the scientists watch will also be available online for anyone who wants to virtually join the expedition and chat with the scientists. Stay tuned to our Facebook page for updates on when we will open these chat windows.

Underwater robots allow researchers to view rarely seen deep-sea habitats and their inhabitants. But sometimes, even seeing isn’t enough. It can still be hard to identify and quantify all the species that are present. NOAA Fisheries is pioneering the use of genetic sampling and will employ it on this cruise as well. Fish and wildlife constantly shed bits of genetic material into the surrounding environment. This environmental DNA (or eDNA) can be collected in a small water sample and later analyzed to determine which species are present in a particular location.

Science to Inform Our Blue Economy

The expedition will provide data to improve our understanding of West Coast seafloor habitats and deep-sea coral and sponge communities. The information researchers gather serves as the science behind important decisions about how we use and protect these areas. It supports decisions regarding:

This expedition also contributes to the West Coast Deep Sea Coral Initiative of NOAA’s Deep Sea Coral Research and Technology Program. This initiative is targeting research and exploration in NOAA’s five West Coast national marine sanctuaries and in areas of high deep-sea coral and sponge bycatch. It will also focus in areas that either have been closed to seafloor-contact fishing and will soon be opened, or that are currently open but will soon be protected in accordance with the Pacific Fishery Management Council’s Amendment 28. Information from the cruise will establish baseline characterizations of essential fish habitat and rockfish conservation areas.

Conducting deep-sea research such as this expedition can be logistically and financially challenging. In 2017, a team of federal and non-federal partners came together to support collaborative science in support of deep-sea research in the eastern Pacific Ocean.

This survey is part of a four-year multi-agency campaign, called Expanding Pacific Research and Exploration of Submerged Systems (EXPRESS). The campaign will survey and map undersea habitat throughout the California Current Marine Ecosystem. The NOAA Deep Sea Coral Research and Technology Program, Office of Ocean Exploration and Research, Office of Marine and Aviation Operations, and the Office of National Marine Sanctuaries are supporting this expedition along with the Bureau of Ocean Energy Management, United States Geological Survey, and National Oceanographic Partnership Program.

As of today, EXPRESS partners have completed 17 expeditions using vessels operated by NOAA, universities, and non-profit oceanographic research institutions. Along the way, every agency and participating organization has contributed assets such as ship and submersible time, science costs, modeling efforts, or personnel.

“Pooling our resources allows us to accomplish on one cruise what would have taken multiple expeditions and been far more expensive,” notes Laidig. “ And I find we all learn a lot working side-by-side with scientists from other disciplines and agencies.”