RS00: The Seal Who Journeyed Across the Archipelago 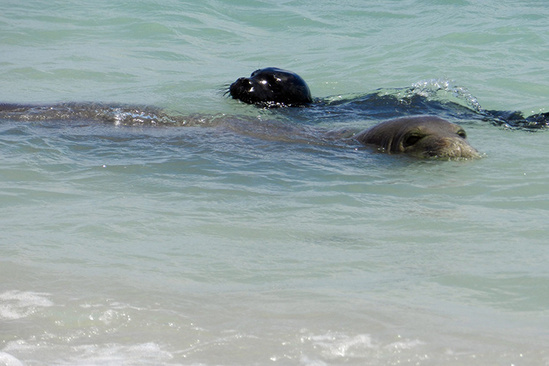 Notable Facts: She has travelled from Midway Atoll to Hawai‘i Island — farther than any other known seal. In 2001, she birthed the first pup ever recorded on Hawai‘i Island.

The monk seal of the month for May is RS00, known colloquially as "Ewa Girl."

Among the seals in the Hawaiian Islands, Ewa Girl has the most wanderlust. That is, she has traveled the furthest and, in the process, expanded the monk seal pupping range to Hawai‘i Island.

RS00 was born in 1992 at Midway Atoll, which is in the far northwestern end of the Northwestern Hawaiian Islands (NWHI). She was tagged as a weaned pup on April 28th on Spit, the smallest islet within Midway Atoll, though it's unknown when exactly she weaned from her mother, whose identity is a mystery. Nonetheless, RS00 was a healthy size when she received her tags, starting off with plenty of "groceries" or fat reserves to sustain her while she learned to forage (find food) on her own. Ewa Girl remained at Midway until wanderlust struck at age 5, just as she was reaching adulthood. It's thought that she first stopped at Laysan Island, where she remained for 2 years. She then traveled on to the main Hawaiian Islands (MHI), where she was first seen on Moloka‘i followed by Kaua‘i, and then Hawai‘i Island. In all, she transited approximately 2,400 kilometers (1,491 miles) — nearly the entire span of the Hawaiian Archipelago. 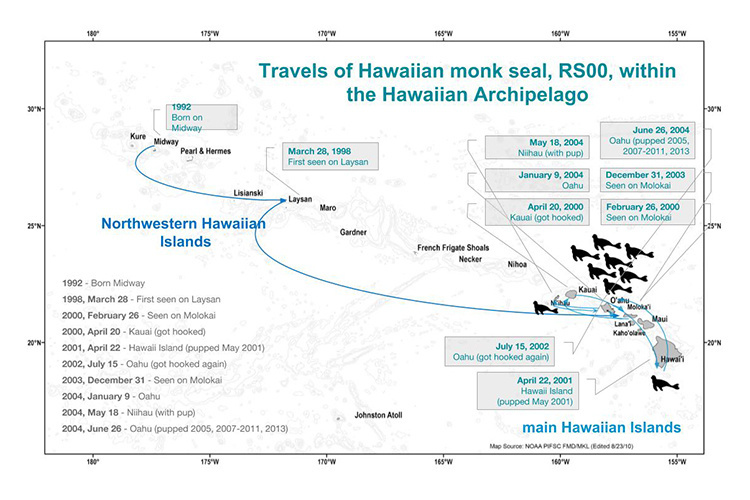 Ewa Girl with a pup at Reef Runway, ‘Oahu in June 2011. At that time she had an applied temporary bleach mark "N2" on her left side for easier identification.

In 2001, Ewa Girl birthed the first pup ever recorded on Hawai‘i Island at Kamilo (near South Point). She later pupped on Ni‘ihau and O‘ahu as well, giving birth to a total of nine pups in the MHI. 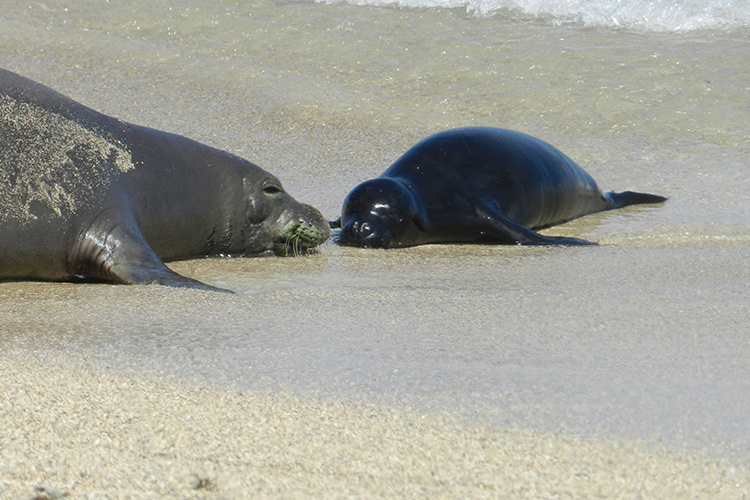 RS00, with one of her nine pups born in the Main Hawaiian Islands.

The percentage of seals that are seen away from their natal (birth) islands or atolls varies by location, but increases to about 14% by adulthood. Though seals commonly move between nearby islands, these movements decline rapidly with distance and there's very little interchange between locations separated by over 400 km (249 miles). Ewa Girl's 2,400 km journey was "off the charts"!

Ewa Girl is also notable for having moved between the NWHI and the MHI. While she is not the first monk seal known to have made this journey, the other seals did so by departing from closer NWHI sites, such as Nihoa, Mokumanana (Necker Island), or French Frigate Shoals. While it's relatively rarely observed, more than 10 seals have made one or more trips between the MHI and NWHI, confirming that monk seals freely disperse throughout the Hawaiian Archipelago. 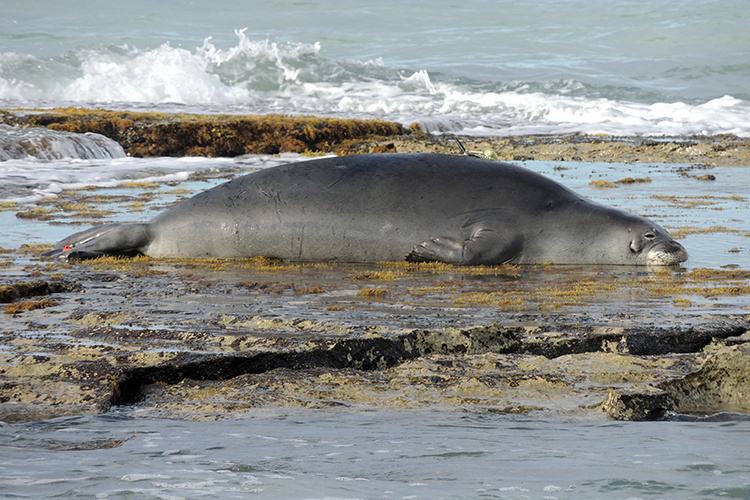 Ewa Girl can be identified by her tags or through natural markings, such as a crescent-shaped scar on her right cheek.

Nobody knows why Ewa Girl made the long trek from Midway Atoll to the MHI. Whatever her reasons, she has been successful in her new home and so have her many pups. Despite thriving in the MHI, however, she has experienced human-borne threats here that she would have avoided if she stayed in the NWHI. For example, she got a fishhook embedded in her tongue on Kaua‘i during her first year in the MHI; she had another hook when she came ashore at ‘Ewa Beach, O‘ahu in 2002 (earning her the moniker Ewa Girl). Luckily, NOAA staff and partners were able to de-hooked her both times. 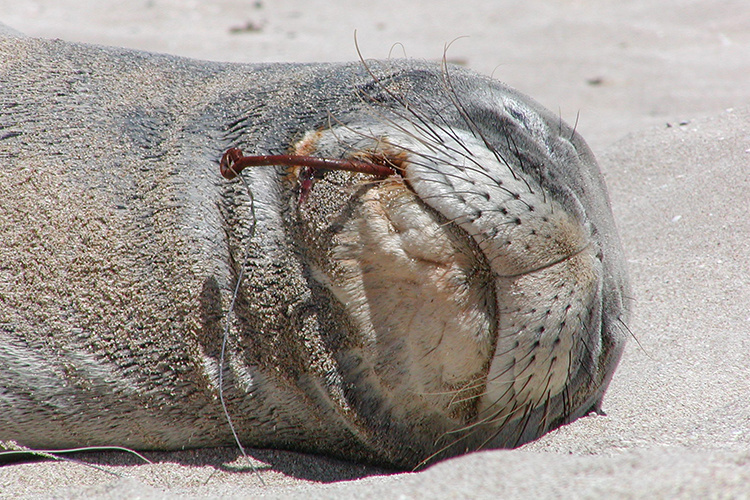 RS00 with a fishhook embedded in the right side of her mouth, ‘Ewa Beach, Oahu in 2002.

Unfortunately, Ewa Girl also experienced children throwing rocks at her and, on another occasion, being burned on the upper right chest, possibly intentionally. 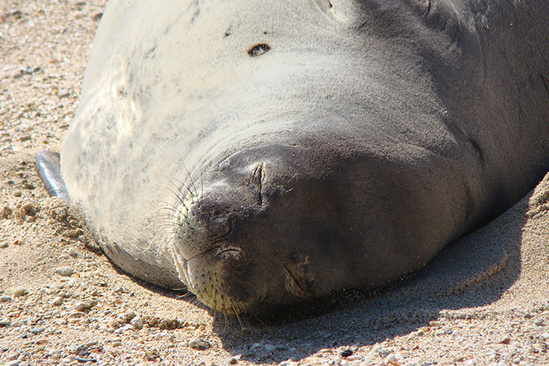 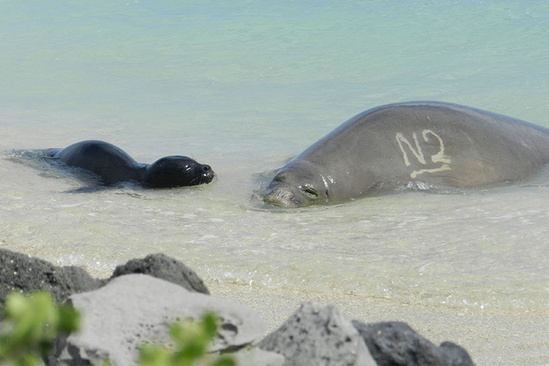 Ewa Girl with a pup at Reef Runway, ‘Oahu in June 2011. At that time she had an applied temporary bleach mark "N2" on her left side for easier identification.

From 2002 to 2004, Ewa Girl hopped between O‘ahu, Moloka‘i, and Ni‘ihau before finally settling down on O‘ahu. She often rested at Hanauma Bay and pupped on Rabbit Island and Reef Runway.

Ewa Girl was last seen in April 2014. Did she move again? Though 22 is fairly old for a monk seal, it's possible that she has simply decided to spend her days in a more inaccessible area. 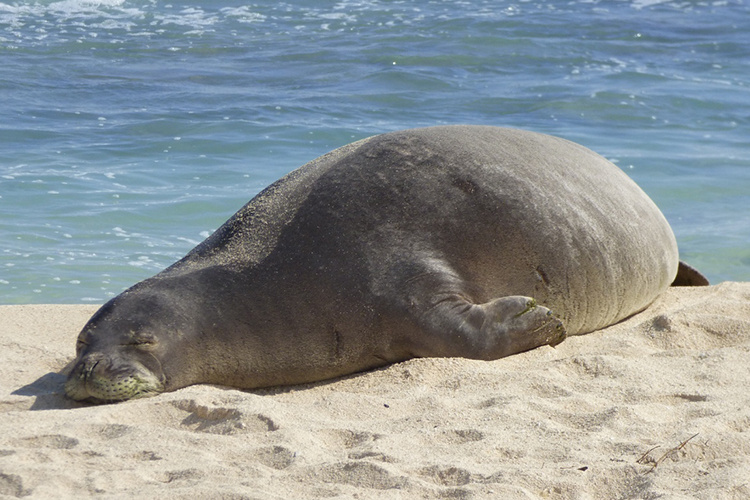