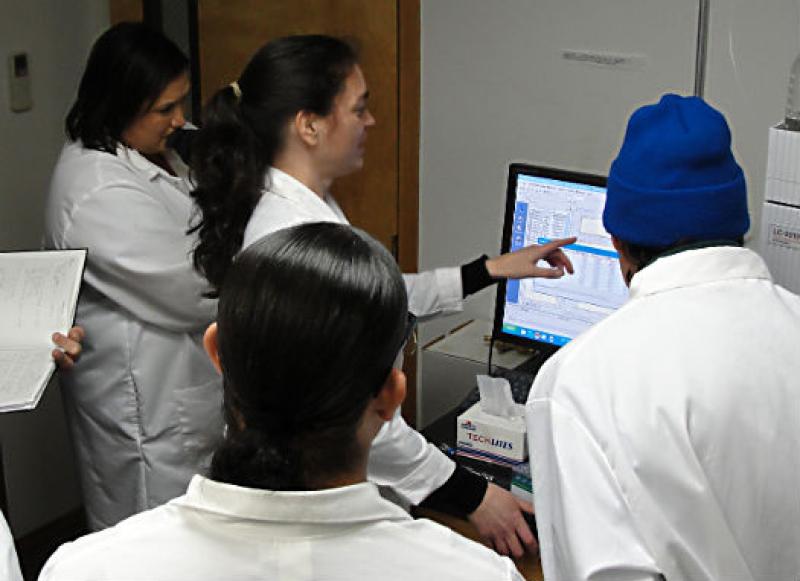 Over several years, Northwest Indian College Professor John Rombold has received funding to stock his laboratory with state-of-the-art analytical equipment worth tens of thousands of dollars. In a chance meeting with Center scientist Dr. Kathi Lefebvre, Professor Rombold explained that he lacked trained personnel to operate the equipment. Instead of running samples, his shiny new High Performance Liquid Chromatography (HPLC) apparatus was only gathering dust.

It didn’t take long for Dr. Lefebvre to hit on the perfect solution. Why not have our experts, who use HPLC extensively to measure algal toxins in marine resources, train NWIC college students how to do the same thing?

On December 2, 2010, she and her team helped Professor Rombold’s science class finally dust off their apparatus and brush up their science skills in a new workshop, “Experience Algal Toxins (EAT) 2010.”

To kick off the workshop, Dr. Lefebvre delivered a lecture about the impact of domoic acid in the marine food web. Domoic acid is a neurotoxin produced by blooms of the algae Pseudo-nitzchia, and this toxin can then move up the food chain through ingestion by fish, shellfish, seabirds, and marine mammals. On the Washington Coast, shellfish in particular are an important subsistence food for many Pacific Northwest tribes, and outbreaks of these toxic algal blooms can result in beach closures, threaten human health, and devastate tribal economies.

The Center’s WARRN-West team — research biologist Dr. Elizabeth Frame, and research technicians Preston Kendrick and Keri Baugh — visited the Bellingham campus several times in preparation for the workshop. Team members set up, programmed, and tested the equipment to ensure the HPLC would be fully operational for measuring the algal toxins. After learning how to use a previously under-utilized tool, Professor Rombold’s students are eager to learn more.

“We’re thrilled that we had an opportunity to bring a new analytical skill to the science curriculum at NWIC, and we’re already exploring possibilities to expand the training,” said Dr. Lefebvre. “This workshop is only the beginning.”

Dr. Lefebvre hopes the EAT 2010 workshop will serve as a starting point for NWIC science students to ultimately develop and maintain their own algal toxin monitoring program. Tribal students interested in delving a bit deeper into algal toxins will have the opportunity for further training in order to design and carry out a research-oriented testing program from their local subsistence farms and shellfish beds.

This collaborative effort between the NWFSC and the NWIC was made possible by NOAA’s Oceans and Human Health (OHH) Traineeship program, the ECOHAB (Ecology and Oceanography of Harmful Algal blooms) program, and NOAA’s Office of Protected Resources.

The Wildlife Algal Toxin Research and Response Network for the West Coast (WARRN-West) is a comprehensive coast-wide surveillance program that aims to quantify the presence of algal toxins in marine mammals. The program, located at the NWFSC, meets the Center’s near-term priority to better understand biotoxins and their impacts on oceans and human health (as identified in the Center’s Strategic Science and Research Plan).

The Northwest Indian College is a consortium of campuses serving the Native American community. The main campus is located within the Lummi Nation in Bellingham, WA. This newly accredited four-year college offers an Environmental Sciences bachelors degree, and students from this program, headed by Professor John Rombold, participated in the EAT 2010 course.