Scientists Use Unmanned Aerial Vehicle to Study Gray Whales from Above

A rare opportunity to study how the environment limits the growth of a recovered population of large whales.

One recent spring day, John Durban, a NOAA Fisheries marine mammal biologist, stood on the California coast and launched an unmanned aerial vehicle into the air. The hexacopter—so called because it has six helicopter-type rotors—zipped over the ocean and hovered above a gray whale mother and her calf. The pair was migrating north from their calving grounds off Baja California, Mexico, to their summer feeding grounds in the Arctic.

NOAA Fisheries scientists have stood at this point of land each year for the past 22 years, binoculars in hand, to estimate the number of gray whale calves born each year. That’s an important step in monitoring the ups and downs of the population. But scientists would like to understand more completely what causes those ups and downs, and this year, with the addition of the hexacopter, they hope to find out. 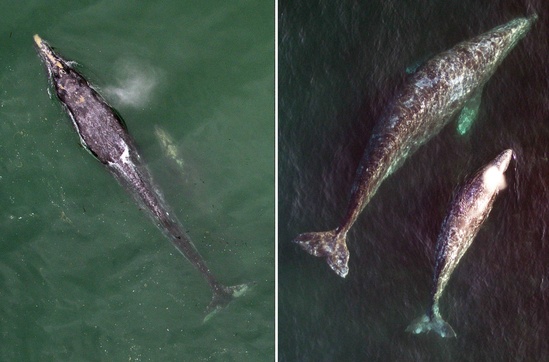 The image on the left shows a very skinny female gray whale and her calf just visible beneath the water’s surface. This whale may or may not have sufficient energy reserves to make it thousands of miles to the Arctic while also nursing her calf. In contrast, the female on the right is quite robust, and has a high likelihood of successfully rearing her calf. Scientists are using an unmanned aerial vehicle to produce very precise overhead images of gray whales, then analyzing the images to understand how environmental conditions affect the health of adult females and ultimately the reproductive success of the population. Photo: NOAA Fisheries.

As the hubcap-sized hexacopter hovered high above the whales it shot straight-down photos from a digital camera mounted in its belly. In addition to a camera, the hexacopter also carried a very precise pressure altimeter, allowing scientists to know the exact altitude at which each image was taken. Later in the lab, they would analyze the images, measuring the length and girth of the whales to within a few centimeters.

“We can’t put a gray whale on a scale, but we can use aerial images to analyze their body condition—basically, how fat or skinny they are,” Durban said.

A Long and Difficult Journey

The amount of fat on a gray whale cow is critical to the survival of her calf. Gray whales don’t feed during most of their months-long migration, and while the mothers are fasting, they’re also nursing their fast-growing calves. Therefore they need a lot of blubber to fuel the journey to their Arctic feeding grounds.

How much blubber they’re carrying depends in part on conditions in the Arctic the summer before. If the whales had access to plentiful prey, the cows will have sufficient fat on them, and most calves will likely survive the journey. But if conditions weren’t favorable, fewer calves will be born, and fewer still will make it.

“By studying the body condition of females, we hope to connect the dots between conditions in the Arctic one year and calf production the next,” Durban said. “Ultimately, we’re trying to understand how environmental conditions affect the reproductive success of the population.”

Throughout the study, scientists kept the hexacopter at least 120 feet above the whales. When used at this altitude by trained scientists who have received permits to operate in proximity to marine mammals or other protected species, unmanned aerial vehicles offer a safe and non-invasive way to collect important scientific data.

NOAA Fisheries biologist John Durban brings the hexacopter in for a landing as colleague Holly Fernbach prepares to catch it. Photo: NOAA Fisheries

This success presents scientists with a unique opportunity to study the ecology of large whales, including how environmental conditions put an upper limit on population growth. Because most other large whales are still threatened or endangered, scientists have had few opportunities to observe these dynamics in action.

“With gray whales, we’re just beginning to understand what a recovered population of large whales looks like,” Durban said.

“We’ll have to get used to seeing recovered populations have good years and bad years,” Durban said. “That’s what happens when you’ve recovered and you’re hovering around a food ceiling.”

As the sun descended toward the horizon, Durban brought the hexacopter in for the day’s final landing. He still had a lot of work in front of him, minutely analyzing images on a computer screen. Though all the images from this study would be of gray whales, other species of large whale are also showing promising signs of recovery.

“Hopefully in the not-too-distant future,” Durban said, “there will be many healthy populations of large whales to study.”