A cooperative Alaska program takes an innovative approach to the global problem of unwanted fish catch. 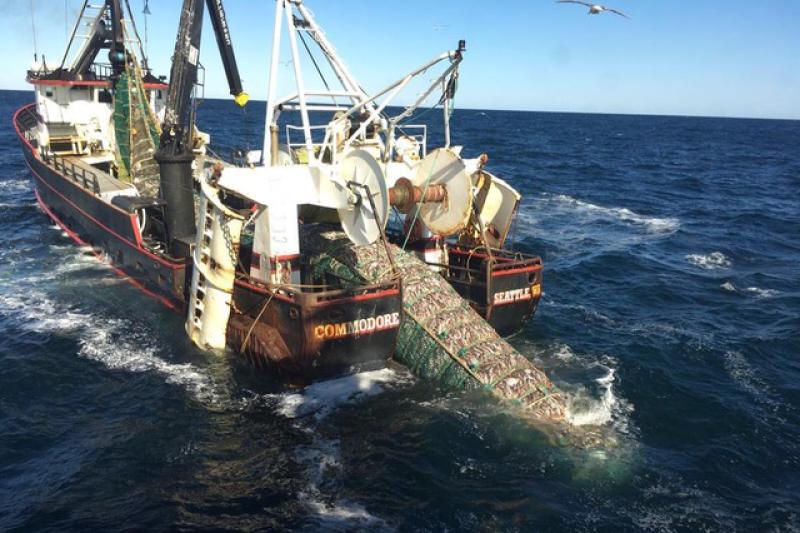 Fishermen sometimes unintentionally catch fish they do not want or cannot keep. This is called bycatch. While these fish are returned to the sea, many of them do not survive. This is a major problem worldwide—nearly 10 percent of global fishery catches are discarded each year

This waste of valuable seafood protein has been an increasing focus of management, industry, and public concern due to its ecological and economic impacts. That’s where our innovative donation program comes in.

Alaska fishermen occasionally catch Pacific halibut and salmon incidentally in trawls targeting groundfish. Because halibut and salmon are valuable targets of other fisheries, they are designated as prohibited species. Groundfish trawlers are not allowed to retain or sell them. Historically, all prohibited species caught in Alaska were discarded at sea to avoid any incentive to catch these species.

The North Pacific Fishery Management Council and the Alaska seafood industry have a long history of cooperative efforts to reduce bycatch. However, even after bycatch has been eliminated to the extent practicable, some is inevitable.

In 1996, NOAA Fisheries and the North Pacific Fishery Management Council established the Prohibited Species Donation Program. It takes a unique approach to the problem of discarded fish by making it possible for fishermen to donate some bycatch to hunger relief organizations. It simultaneously reduces waste, provides high quality seafood protein to people in need, and avoids incentives to catch prohibited species.

“Bycatch donation is an example of thinking outside the box. When we think about reducing waste, it is usually about avoiding bycatch. This program is a creative solution to maximize the value of the bycatch that can’t be avoided,”  said Jordan Watson, NOAA Fisheries biologist at the Alaska Fisheries Science Center.

Watson is lead author of a new study of the program as a rare example of an approach that addresses food security and social value. Along with continued efforts to reduce bycatch, Watson suggests that the program could serve as a model to help mitigate waste around the world.

“We support this program because it helps to reduce waste in our fisheries and gives to communities in need,” said Megan Mackey, Fisheries Management Specialist at the Alaska Regional Office of Sustainable Fisheries. “It's really a win-win program.”

Bycatch Donation Works on the Strength of Partnerships

The program allows for trawl-caught halibut and salmon (that do not survive) to contribute to food security. The nonprofit organization SeaShare makes it happen.

Since the program began in 1996, SeaShare has been the sole applicant and distributor of prohibited species donations.

Seashare coordinates the processing, transportation, certification, and distribution of seafood donations. To accomplish this, it relies on voluntary partnerships and financial support from the seafood industry participants.

The seafood industry donates time and resources. Despite these additional costs, a large number of fishermen and processors voluntarily make the extra effort.

“Nobody wants to catch species they aren’t targeting. Our fishing partners go to great lengths to avoid and minimize it. But when they do encounter it, they are willing and have the capability to handle it carefully so that those valuable fish aren’t thrown overboard,” said Jim Harmon, director of Seashare.

“Trawl fishermen do not like to waste the fish they catch,” said Brent Paine,  Executive Director of United Catcher Boats. “Having the ability to deliver salmon and halibut, and allowing the processors to process and put  incidentally caught fish into the donation program is just the right thing to do.”

Many organizations and individuals also donate resources to get the seafood where it needs to go. Cold storage providers, freight companies, packaging companies, and financial supporters all volunteer to work with SeaShare in this shared effort. The U.S. Coast Guard contributes by flying pallets of fish to remote Alaska locations like Kotzebue and Nome.

The program fills a critical nutritional need for protein, especially in Alaska.

A 2014 survey by Feeding America found that 14 percent  of the Alaskan population and 20 percent of Alaskan children are food insecure. That means they lack access to safe, nutritious food. Further, 81 percent of people said their strategy for coping with food insecurity was to purchase less expensive, less healthy food. The donation program provides much-needed high quality seafood protein.

Because halibut and salmon are relatively expensive seafood, donation to food banks provides them to people who could not otherwise afford them. This avoids competition with target salmon and halibut markets.

“The value of the program to folks experiencing homelessness and hunger cannot be overestimated,” said Mariya Lovischuk, director of The Glory Hall food bank in Juneau, Alaska. “Seashare provides reliable access to high quality protein. Like many nonprofits serving vulnerable populations, The Glory Hall operates on a shoestring budget. We cannot afford to buy protein and certainly not protein of this quality. Many of the individuals we serve are suffering from debilitating health conditions. Having access to quality food like that provided by the bycatch donation program is critically important.”

“The community of Kotzebue and 11 surrounding communities in the Maniilaq service area appreciate the annual donation of bycatch to our region,” said Kelli Shroyer, Public Communications Director for Maniilaq, Alaska. “Each year thousands of pounds of halibut are distributed to residents thanks to the generous donations from SeaShare and partners.”

“Bycatch donation is a creative solution that the industry came up with to get seafood that would otherwise be wasted to people who really value it,” said Watson. “So many people work together to make the program work. It is a testament to people’s passion and goodwill.”