Sentinels of Change: Gray Whales in the Arctic

Gray whales are now making their great annual migration to Arctic feeding grounds. What they find there may be changing. 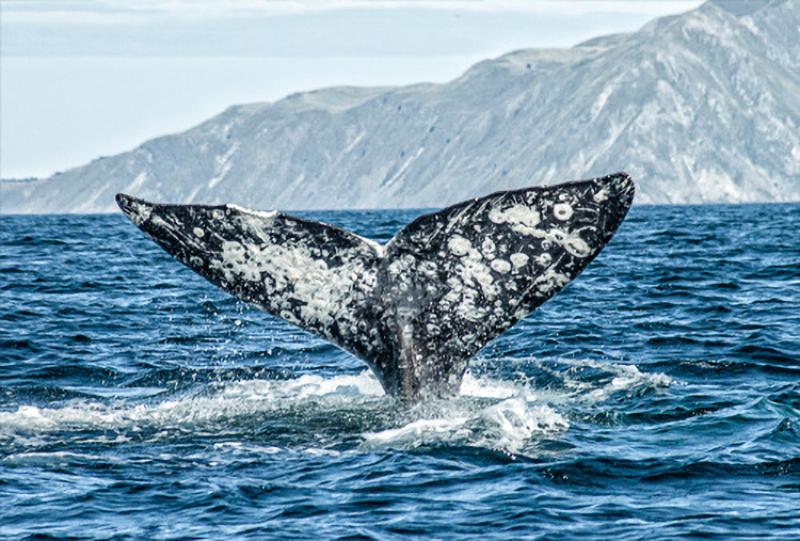 They owe their distinctive mottled look to a coat of crustaceans that can weigh up to 400 pounds. Their swim from Alaska to Baja and back may be the longest annual migration of any mammal. And they were named "devilfish" by whalers who watched them charge and smash boats to defend themselves and their calves.

But perhaps what sets gray whales apart most is their eating habits. Gray whales are the only baleen whales that feed primarily on the bottom of the ocean.

Other baleen whales strain plankton from the water column. A gray whale dives to the bottom, turns on its side, scoops the top inches of sediment into its mouth, and strains small animals from it, especially amphipods, small shrimp-like creatures that are the favorite food of gray whales in the Arctic. A telltale plume of mud shows where a gray whale fed on the bottom.

That's what gray whales usually do. But scientists have learned that with gray whales, you can't count on usual. Most migrate, but some don't. And most gray whales bottom feed, but if there is better eating in the water column, they will feed there instead.

It may be this flexible, opportunistic approach to life that has kept the species swimming through multiple warming and cooling phases during their 2.5 million years on the planet.

That's why marine mammal scientist Amelia Brower is keeping an eye on them.

"Climate change is real and it's happening fast. The Arctic is the area of the world that is changing fastest. Comparing where gray whales are and how they behave over time may provide insight into how the ecosystem is changing," says Brower. "Gray whales may be important sentinels of ecosystem changes to come."

Climate warming affects high latitudes faster and more dramatically than the rest of the earth. Melting away the sea ice cover exposes more ocean area and alters the entire ecosystem.

One way that sea ice affects the ecosystem is through its influence on the spring bloom of phytoplankton, microscopic algae that are the base of the ocean food web.

Loss of sea ice changes the ecosystem from the bottom up 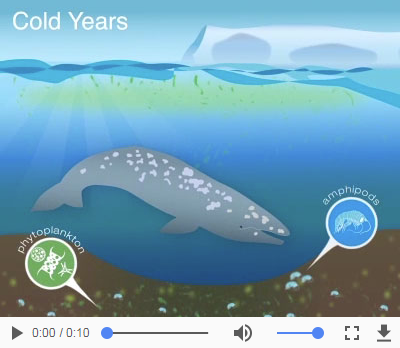 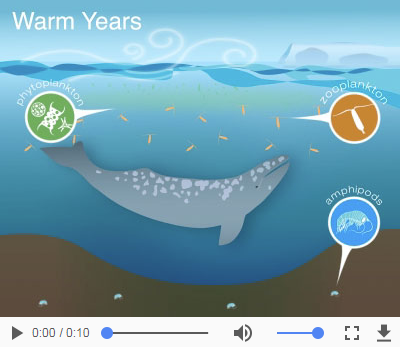 In cold years ice cover remains until late spring. Sea ice and meltwater stabilize the water column, creating a clear, nutrient-rich surface layer, which, combined with increasing light, sets the stage for an intense phytoplankton bloom that follows the retreating ice edge. Zooplankton are not yet ready to graze, so most of the phytoplankton sinks to the bottom, where it is eaten by bottom-dwelling creatures, including amphipods.

In warm years, sea ice melts early in the spring, before there is enough light to fuel an intense phytoplankton bloom. Melting ice exposes the surface of the ocean to winds that mix the water layers, disrupting the stratification that keeps nutrients and phytoplankton in the light zone. The bloom is less productive and happens later, when hungry zooplankton are present and ready to eat; most of the phytoplankton are grazed before they sink to the bottom, leaving little for the bottom-dwelling amphipods. 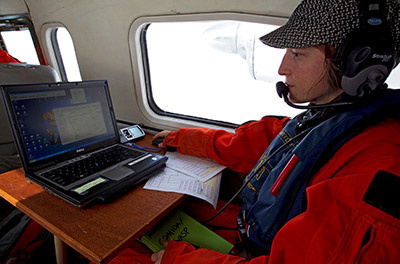 If it gets warm enough for this to happen in the Arctic, gray whales may shift their banquet from the bottom to feed on zooplankton in the water column, or they may move elsewhere to find other food.

So Brower is watching them. As part of the Aerial Surveys of Arctic Marine Mammals project, she and her team fly over the northeastern Chukchi Sea to see where gray whales are, where they are bottom-feeding, and how they behave. She records when they breach, dive, feed, flipper slap, log play, mate, mill, rest, roll, spy hop, swim, tail slap, thrash, or blow under water. She compares this data with information on amphipod distributions.

"The most exciting thing about this research is being in the airplane. The sea ice is beautiful, I get to see the animals, and I'm working in the area of the world that is changing the fastest."

If gray whales can change with it, it bodes well for their future--and may help us to better understand ours.

Because as Brower says, "Everything is connected. All the ecosystems around the globe. What happens in the Arctic will affect the rest of the world."

Amelia Brower is a research scientist with the University of Washington's Joint Institute for the Study of the Atmosphere and Ocean (JISAO) working under a grant with NOAA Fisheries at the Alaska Fisheries Science Center.

The Aerial Surveys of Arctic Marine Mammals project is funded by the Bureau of Ocean Energy Management (BOEM) and is co-managed by BOEM and the NOAA Fisheries Marine Mammal Laboratory.

Last updated by Alaska Fisheries Science Center on May 15, 2019