A NOAA-supported project in California restores high-quality, cold-water habitat for salmon, boosting their resilience to rising temperatures due to climate change. 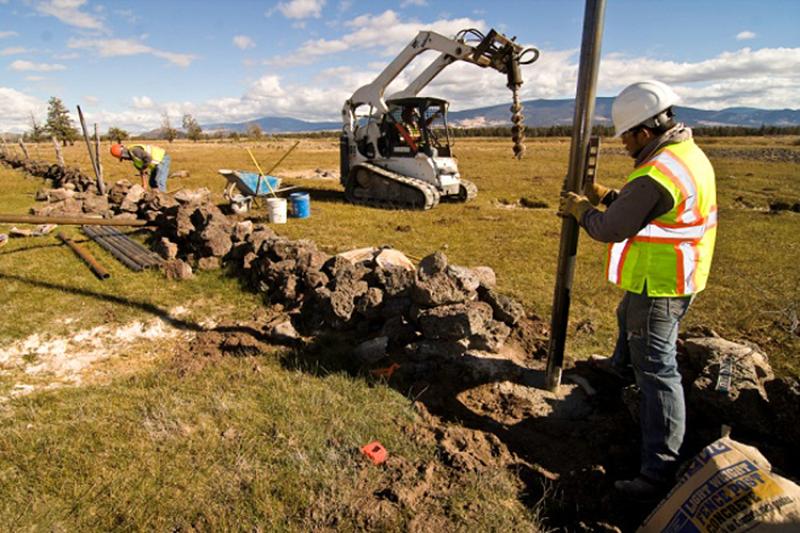 Fence installation along a tributary of the Shasta River. Credit: Erika Nortemann.

Many species, such as salmon, rely on cool waters to survive during the hot summer months. But with temperatures rising due to climate change, these cold-water habitats are being threatened. In California’s Shasta River, a NOAA-supported habitat restoration project is helping to keep waters cool for salmon.

The Shasta River is an important tributary of the Klamath River, which was once the third largest salmon-producing river on the West Coast. Historically, the Shasta River supported more than 80,000 salmon each year. Today, however, only up to a few thousand adult salmon return to the river each year.

One of the issues facing Chinook salmon, steelhead trout, and threatened coho salmon in the Shasta River is a lack of healthy habitat. In particular, high water temperatures and poor water quality during the hot summer months can lead to lethal conditions for salmon.

Juvenile salmon need access to cool water to survive warm summer temperatures. In healthy habitats, trees and other vegetation growing along the banks of rivers and streams provide shade that keeps the water cool. Deep, fast-moving waterways also stay cooler than shallow, slower-moving ones. As water temperatures continue to rise due to climate change, maintaining these cold-water habitats for salmon becomes more crucial.

On Big Springs Creek, a tributary to the Shasta River, water temperatures were heating up as high as 77 degrees Fahrenheit—too warm for salmon to tolerate. These high temperatures were caused in part by uncontrolled livestock grazing. Cows were eating the vegetation that otherwise would have provided shade and kept the water cool. They were also trampling the streambed, creating a shallower, wider river channel that was more easily heated by the sun’s rays.

In 2009, NOAA Fisheries’ Office of Habitat Conservation supported an effort to improve salmon spawning and rearing habitat along the Shasta River and its tributaries through the American Recovery and Reinvestment Act. Alongside our partners The Nature Conservancy and U.S. Fish and Wildlife Service, we:

Habitat restoration efforts like these are critical in supporting the recovery of coho salmon, Chinook salmon, and steelhead. Providing high-quality, cold-water habitats for salmon supports their resilience and adaptability in the face of a changing climate.

Last updated by Office of Habitat Conservation on July 27, 2021