The Sound of Endangered Salmon Surviving

In drought-stricken California, scientists track migrating Chinook salmon to make the most efficient use of scarce water resources.

Any day now, next time a storm sends a pulse of water down California’s Sacramento River, biologists at the Livingston Stone National Fish Hatchery will release this year’s batch of winter-run Chinook salmon. Of the 400,000 4-inch-long salmon smolts they release, 570 will be emitting a coded sound from a tiny electrical device implanted in their bellies. They’ll beep all the way down the river and, for those lucky enough to make it, out to sea.

But fish aren’t the only ones in need of water during the drought. Farmers in the Central Valley and city dwellers in Southern California are thirsty as well. 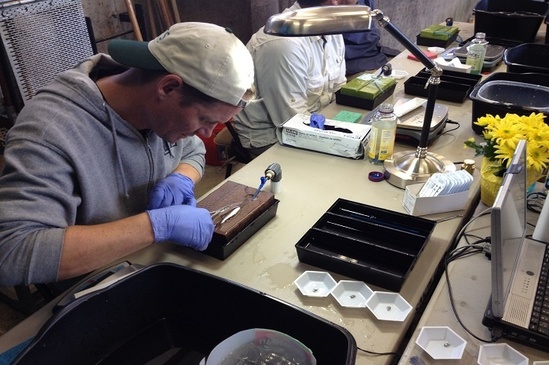 Ryon Kurth of the California Department of Water Resources surgically implanting an acoustic transmitter into the belly of a Chinook salmon smolt. Photo: NOAA/Arnold Ammann.

“In a drought every drop of water has had to do multiple jobs,” said Maria Rea, the West Coast assistant regional administrator for NOAA Fisheries. “We have to make very efficient use of that water.”

This year’s batch of beeping fish will help water managers do just that.

Providing Water for Ecosystems and for People

To reach the sea, the salmon smolts must pass through the Sacramento-San Joaquin River Delta, where a series of gates and pumps moves water from northern California to the more arid central and southern parts of the state. This is one of the largest water infrastructure complexes in the world, and the diverted water sustains 26 million people in Southern California and a 45-billion-dollar agricultural economy in the Central Valley.

But diverting water can be dangerous for migrating salmon. As the pumps divert water, the smolts can be drawn toward the southern Delta instead of migrating out to sea. They are vulnerable to predators in the Delta, and the delay means fewer of them survive the journey.

“We want to protect the fish, but we also need to provide water for farms and cities,” said Rea. “If we know where and when the fish are migrating, we can fine-tune that balance.”

That’s where the beeping fish come in.

Twenty-six million people in Southern California, including residents of Los Angeles, depend on water imported from the northern part of the State. Photo: Marshall Astor (CC BY-SA 2.0)

During the past week, Arnold Ammann, a NOAA Fisheries biologist, along with colleagues from the U.S. Fish & Wildlife Service and the California Department of Water Resources, have done surgery on 570 salmon smolts. Into the belly of each 4-inch-long juvenile fish they’ve implanted a tiny beeper. The beepers, each barely bigger than a grain of rice, emit a coded sound every 10 seconds that is unique to the fish that carries it.

Sound travels well in water, and scientists have installed underwater microphones—also known as hydrophones—in strategic locations along the Sacramento River to listen for the beeps. Each time a listening device hears a beep, it decodes it to identify the fish swimming by. The device then uploads its data via cell phone link to a central database.

“There used to be a lot of uncertainty about where the fish were in their migration,” Ammann said. “We have a lot more information on that now.”

With real-time data on the location of migrating Chinook salmon, water managers can close the gates and reduce pumping while the bulk of the fish migrate past. The reverse is also true: if a rare storm rolls in and the fish aren’t nearby, water managers can take advantage of the opportunity to increase water exports.

Last year was the first time that this type of real-time information on the whereabouts of migrating Chinook was available. In the 12 months since, scientists roughly doubled the number of hydrophones in the river, increasing the spatial resolution of the data.

Currently, only hatchery-raised fish are carrying beepers, but the migrations of hatchery-raised and wild fish partly overlap. In addition, scientists keep track of migrating wild fish by capturing them briefly in traps, then counting and weighing them and letting them go.

Sacramento River winter-run Chinook were listed as endangered in 1994. But they are in a particularly precarious state this year. Relatively few juveniles survived during the past 2 years due to high river temperatures brought on by the drought. Scientists worry that a third consecutive year of very low survival could spell the end for this run of salmon, so getting water management decisions right this year is critical.

“We do think there is a recovery path for this species,” said Rea. “But we have to help them survive this drought.”

If you listen closely along the Sacramento River sometime in the next few weeks, that beeping you’ll almost hear is the sound of fish surviving.

Sacramento River winter-run Chinook salmon is a Species in the Spotlight.

Last updated by Office of Communications on May 10, 2021