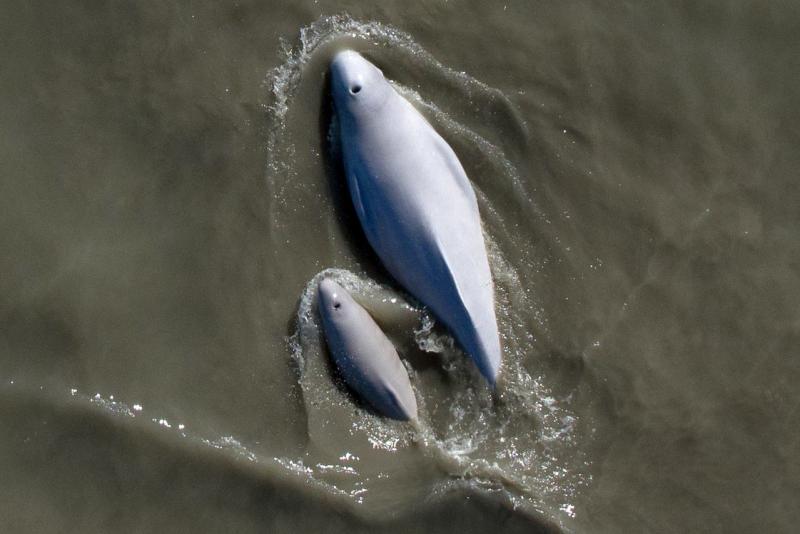 Cook Inlet beluga whales live in one of Alaska’s most active shipping channels. Historically, the population was reduced due to hunting. Hunting ceased in 2005, but they have failed to recover.

Scientists are trying to determine why the population has not recovered. They hypothesize it may be due to a combination of several potential factors including:

Biologist Paul Wade, who leads Cook Inlet beluga whale research at NOAA’s Alaska Fisheries Science Center, said, "Our biggest problem is while we can identify a number of threats, we can’t definitively say what’s causing the decline in the Cook Inlet beluga population."

Researchers recently released new, more accurate and updated Cook Inlet beluga abundance estimates from 2004 to 2018. The new numbers are lower than previous estimates and the abundance continued to decline in 2018.

To gather population data for these estimates, Wade’s colleagues conduct aerial surveys to count groups of beluga whales, sometimes numbering more than 200 individuals. They aggregate around river mouths to hunt for fish in the spring and summer months.

When researchers find a group of belugas, they fly a "race-track" pattern around the group to make video passes. They capture video images of the whales from the plane and count them from above. 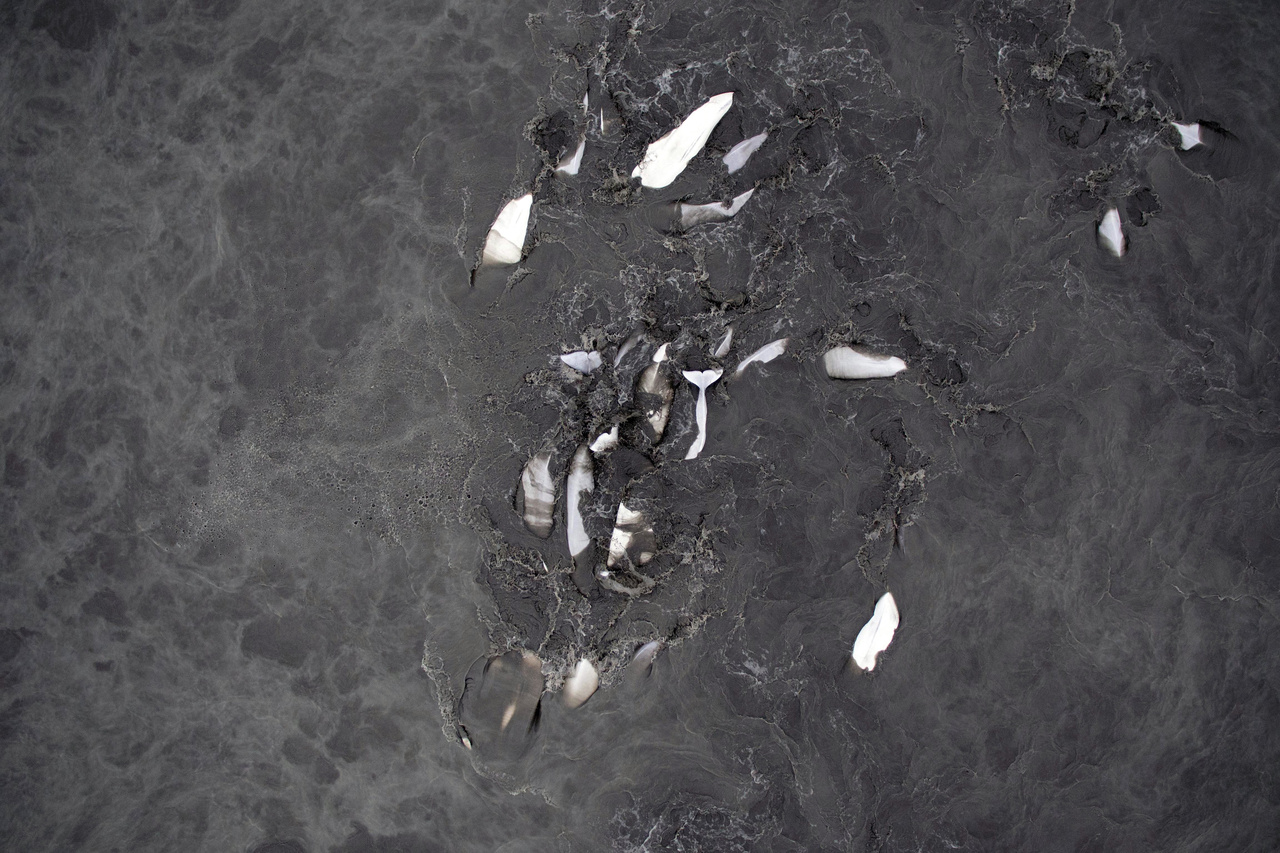 A group of beluga whales photographed from above. This group was in very shallow water (<1.5m or 5 feet) in upper Knik Arm, and may have been corralling their prey, which likely would have been coho salmon. Credit: Hollis Europe & Jacob Barbaro/NOAA Fisheries.

"We take the video of the beluga groups back to our lab to analyze the footage and count the number of whales in each video pass. We also measure how long each whale is at the surface using a custom program called Beluga Dots. Then we use these video data to estimate the size of the entire group, using a statistical model that accounts for whales below the surface and whales that are too small to see in the video," Wade explained.

They also collect photos of the whales from uncrewed aerial systems (drones), in collaboration with colleagues at the Alaska Department of Fish and Game and NOAA’s Southwest Fisheries Science Center. The photos can be used to identify individual whales and gather additional measurement data—a science known as photogrammetry. 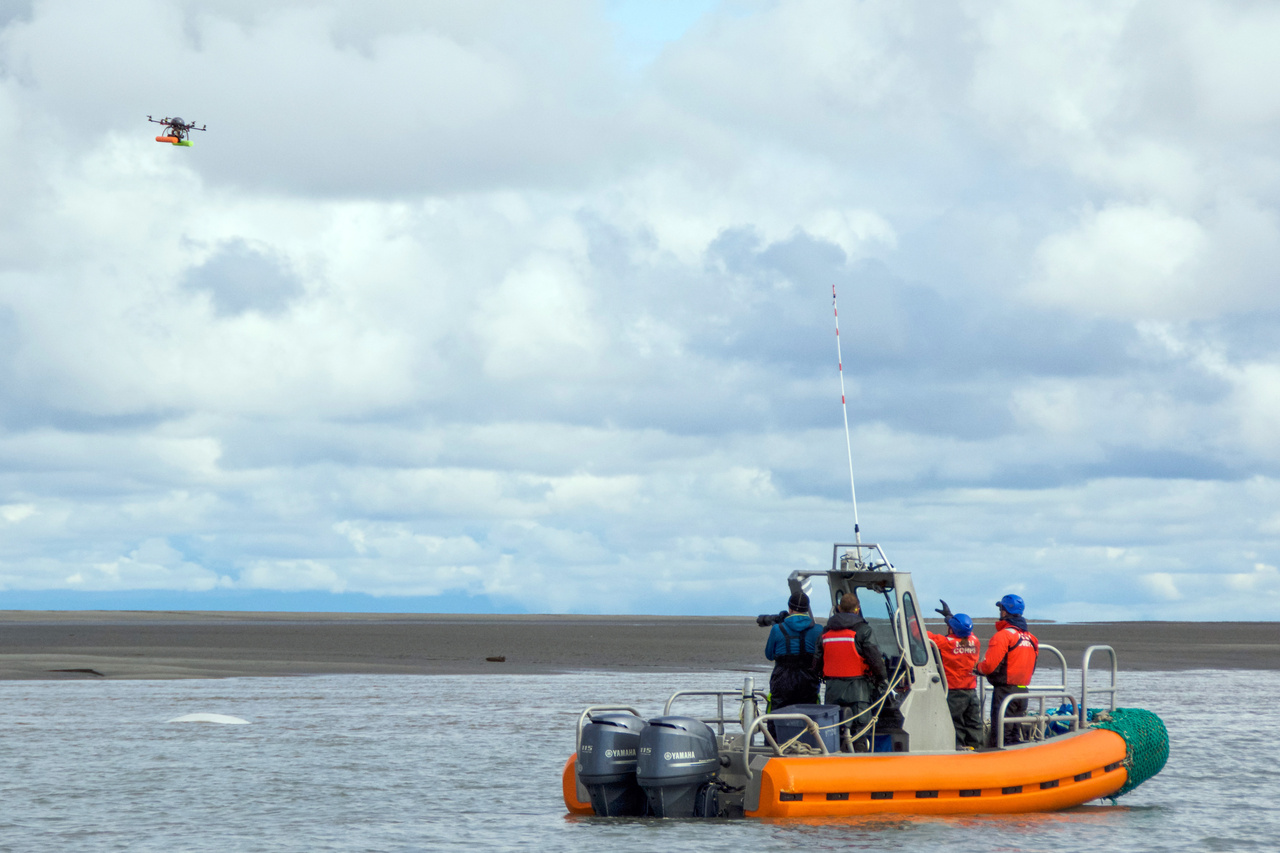 Because you cannot see through the silty water in upper Cook Inlet, researchers can only measure the parts of the whale that come out of the water. Wade and his colleagues are measuring between two reliable points on the backs of the whales, from the whale’s blowhole to its dorsal ridge. These measurements can help determine growth rate and overall health. Preliminary analysis has shown them to be an accurate gauge of the animal’s age class as well, the primary focus of the study.

"We can look at calf production on an annual basis using photogrammetry," Wade said. "Calves are a grayer color than adult belugas, but the relative length measurement really helps to confirm whether a beluga calf is a newborn whale, a yearling, or 2 or more years old. Some images of the whales are good enough that we can see the fetal folds on newborn calves from when they were bunched up in the womb, indicating they were born within a few weeks of when we saw them."

By combining all of these observations, scientists can see what age, size, and color class an individual whale belongs to. This helps us to build a comprehensive overview of the population. Researchers can also see which whales have reached sexually reproductive life stages. They compare those observations to estimates of pregnancy rates in the whales from beluga blubber samples collected during biopsy surveys. Nick Kellar, at NOAA’s Southwest Fisheries Science Center, is quantifying progesterone levels to identify which female whales are pregnant. He is also measuring cortisol levels, which can be used as an indicator of whales that are experiencing stress.

"We just published a Cook Inlet beluga genome, so now we can look for expressions of specific genes related to immune response, and more," Wade said. "Genotyping allows us to assign genetic IDs to individual whales and determine parent-offspring relationships." Through a collaboration with Oregon State University, Wade and his colleagues are also able to estimate the age of the whales from skin samples collected from live whales. They determine their ages using epigenetic methylation rates. "These new cutting edge techniques are opening doors to types of research we just couldn’t do before," said Wade. 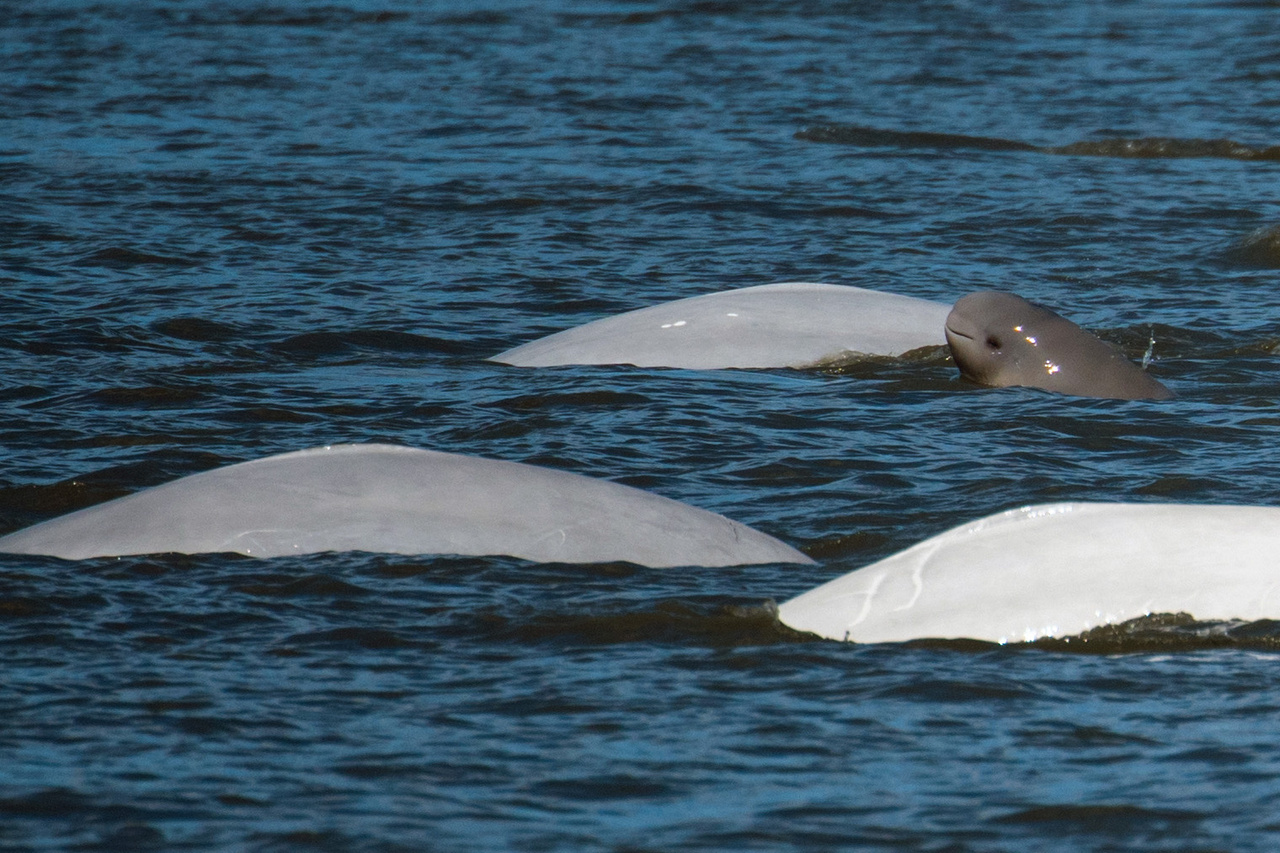 Wade and Verena Gill, from NOAA’s Alaska Regional Office, are working with partners (University of Alaska Kenai Peninsula and Northwest Fisheries Science Center) to use environmental DNA (eDNA), not to study belugas, but to study what prey may be available where belugas aggregate. This is still unknown at many times of the year, especially in the winter months. Wade explained that by collecting water samples in areas where belugas feed, eDNA may tell us which fish species belugas are eating.

Beluga whales rely heavily on sound to "see" in the waters of Cook Inlet. Sometimes called "canaries of the sea," they make high-pitched calls and whistles and use echolocation to sense their surroundings and locate prey. Scientists have now discovered ways to study belugas using innovative acoustic research techniques. This research is led by Alaska Fisheries Science Center collaborator and acoustician Manuel Castellote (Joint Institute for the Study of the Atmosphere and Ocean and University of Washington).

In Bristol Bay, the Marine Mammal Laboratory and Alaska Department of Fish & Game coordinate a beluga population health assessment study with support from Georgia Aquarium, Shedd Aquarium, Mystic Aquarium, and Sea World. Castellote worked with a group of colleagues, including scientists from the Alaska SeaLife Center, Alaska Department of Fish and Game, Woods Hole Oceanographic Institute, and MarEcoTel. They conducted groundbreaking research on a different population of belugas using three instruments. They used two acoustic tags attached to the whale’s back, and an internal stomach temperature sensor (or "pill") that communicated with the external tag via Bluetooth.

This terminal buzz is the rapid firing of echolocation clicks the whales make to acoustically "see" and chase prey very close to the beluga’s head. Castellote recognized that a specific buzz with very short intervals between the clicks always happened just before they heard the crunches and the temperature of the whale’s stomach got colder. 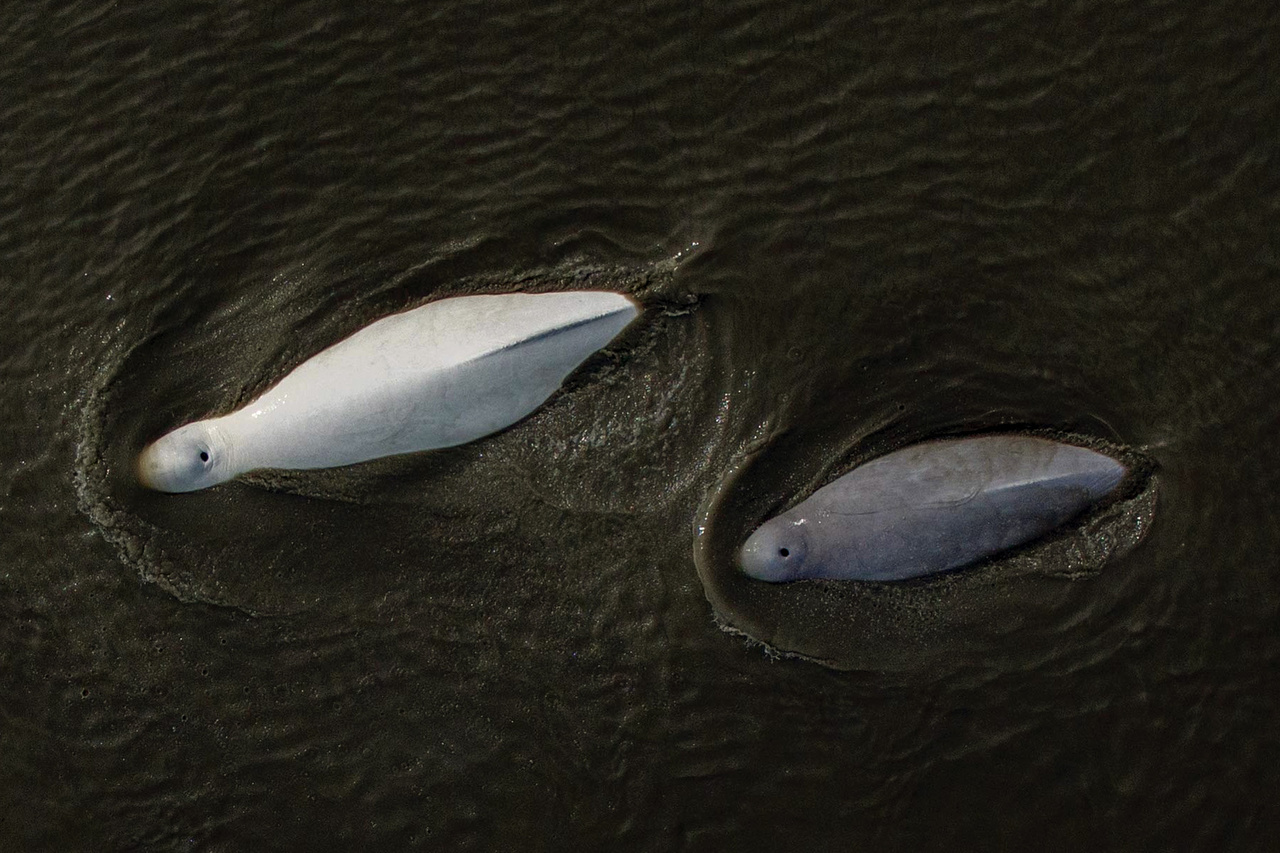 The temperature drop that occurs immediately after the terminal buzz represents the cold fish entering the warmer stomach of the whale. This confirmed that the terminal buzz is the sound the whale makes to track its prey just before it begins to bite and swallow it. Scientists can now use recordings of this terminal buzz to accurately detect when and where whales are feeding. This means data collected by passive acoustic recorders in moorings don’t just confirm if belugas are present. The data confirm whether the whales were feeding, which makes acoustic data much more valuable for figuring out the whales’ foraging behavior.

Castellote has documented very high noise levels in the upper Cook Inlet, which could potentially mask the belugas’ ability to hunt using echolocation. More research is needed to better understand the effects of high noise levels on beluga prey-capture success and overall hearing capabilities. We also want to learn whether specific noises or noise levels might exclude belugas from important habitat.

Hearing tests have been done on Bristol Bay belugas, but not wild Cook Inlet belugas. Whales have to be temporarily restrained and handled in order to test their hearing. That presents some potential risk to the whale, so such research has not been recently done on endangered Cook Inlet belugas.

But one captive Cook Inlet beluga has been tested: Tyonek, the young Cook Inlet beluga who was rescued after stranding in September 2017. He had two hearing assessments done while at the Alaska SeaLife Center, before being transferred to SeaWorld San Antonio. Castellote and his colleagues have determined Tyonek’s hearing range is similar to belugas in Bristol Bay. This gives them more confidence they can use the measured hearing capabilities from Bristol Bay belugas to determine which frequencies of sound affect and may disrupt Cook Inlet belugas the most. They will also look at how Tyonek’s hearing changes over time to see if hearing further develops as whales grow to adulthood.

Much of this new research being conducted on Cook Inlet beluga whales has been funded through the Species in the Spotlight initiative. This initiative identified nine endangered keystone species at risk for extinction in need of immediate help. "The support for Cook Inlet beluga whales through the Species in the Spotlight initiative has been a game changer, allowing us to do many studies we just could not do before,” Wade said.

All photos on this page taken under NOAA permit #20465.