Researchers are using scuba and three-dimensional models to document the extent and severity of coral bleaching across the main Hawaiian Islands. 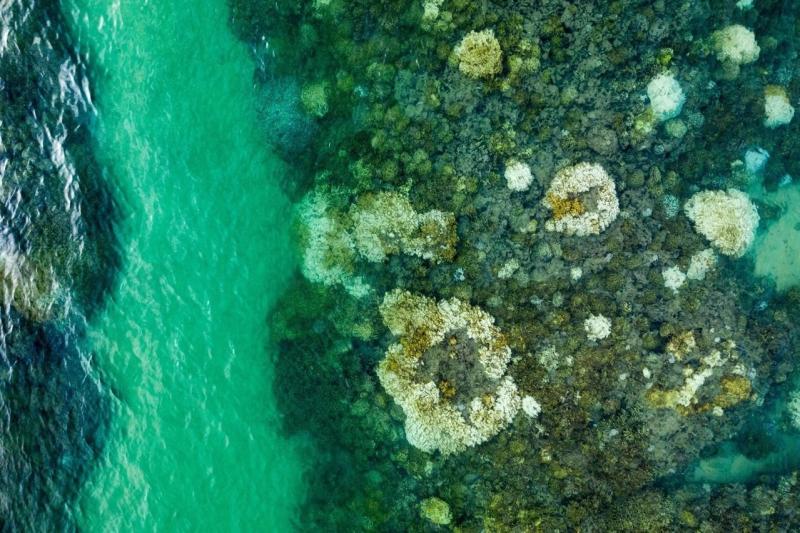 Our researchers are joining the multi-institution Hawaiʻi Coral Bleaching Collaborative to document the extent and severity of coral bleaching across the main Hawaiian Islands. Citizen scientists and University of Hawaiʻi academics have already reported coral bleaching in areas on Kauaʻi, Oʻahu, Molokaʻi, Maui, Lānaʻi, and Hawaiʻi Island.

Over the next few months, our team will lay the groundwork for tracking coral response and recovery through time. We will rapidly assess bleaching stress in as many Hawaiʻi coral reefs as possible. We want to understand several aspects of these events:

We will use underwater digital cameras to take thousands of overlapping high-resolution pictures of selected reef sites. Back in the office, advanced computer software puts these pictures together to create three-dimensional models of the reef. We use these models to assess how coral colonies endure, succumb, or recover from bleaching stress.

A three-dimensional model of a coral reef is constructed using thousands of digital photographs.

High water temperatures over a prolonged period can cause coral bleaching. Researchers expect Hawaiʻi corals to experience major bleaching from September to November this year. Their predictions are based on the current sea surface temperature models generated by the NOAA Coral Reef Watch program.

Major coral bleaching occurred in Hawaiʻi in 2014 and 2015, making this the third event in the last 6 years. This pattern suggests that bleaching is becoming more frequent in Hawaiʻi waters. While corals can regain their pigmentation and recover if temperatures decrease, they can die if they remain severely bleached for extended periods of time.

Our scuba surveys will kick off in Oʻahu this week. Next week, we will begin deploying teams of divers to Maui, Lānaʻi, and Hawaiʻi Island. Stay tuned for reports from the field as our scientist get underwater to assess the extent of coral bleaching across the main Hawaiian Islands.