Testing of samples from marine wildlife during an unprecedented harmful algal bloom on the West Coast in recent months detected indicate potentially widespread effects of the bloom in marine food webs. 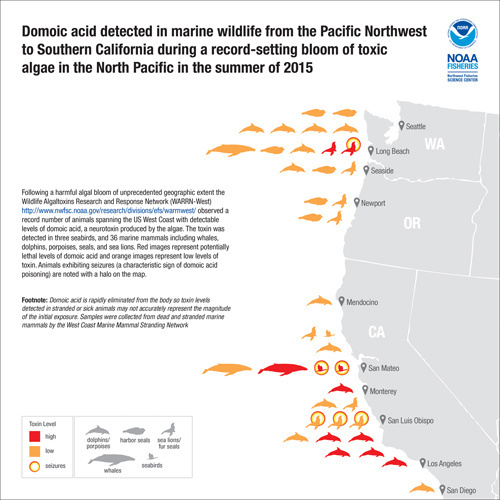 Domoic acid was detected in three seabirds as well as 39 marine mammals, including whales, dolphins, porpoises, seals, sea lions, and sea otters. Toxin concentrations were designated as high (red) or low (orange) based on previous surveillance data collected over several years. Red images represent potentially toxic levels of domoic acid and orange images represent low levels of toxin. Animals exhibiting seizures (a characteristic sign of domoic acid poisoning) are noted with an asterisk on the map. Domoic acid is rapidly eliminated from the body so toxin concentrations detected in stranded animals may not accurately represent the magnitude of the initial exposure as all animals were found dead or exhibiting seizures.

Testing of samples from marine wildlife during an unprecedented harmful algal bloom on the West Coast in recent months detected domoic acid, the toxin produced by the algae, in 36 marine mammals and three seabirds collected along the coast from Southern California to the Pacific Northwest, indicating potentially widespread effects of the bloom in marine food webs.

The testing was conducted by the Wildlife Algal-toxin Research and Response Network, or WARRN-West, led by NOAA Fisheries’ Northwest Fisheries Science Center in Seattle. WARRN-West is a network of federal, state, tribal and private partners that monitors wildlife for exposure to algal toxins. NOAA’s West Coast Marine Mammal Stranding Network provided samples from stranded marine mammals as part of the monitoring effort.

The animals tested included a number of those reported to stranding networks and other authorities since the toxic bloom of Pseudo-nitzschia emerged last spring. The bloom eventually grew into the largest harmful algal bloom ever recorded on the West Coast. Tests found potentially toxic levels of domoic acid in several animals including a humpback whale and two seabirds in Northern California and sea lions in Washington. A sea lion in Washington and others in California, as well as seabirds, experienced seizures, a common sign of domoic acid poisoning.

Since the first reported poisoning of marine mammals by domoic acid in 1998 in Central California, toxic effects such as seizures and death have become common in California sea lions during blooms along the California Coast. But last May brought the first observed seizures and high concentrations of domoic acid in sea lions as far north as Washington. The findings suggest that unusually warm water off the West Coast in the past year led to a more toxic and widespread bloom with greater impacts on marine wildlife, said Kathi Lefebvre, a research biologist at the Northwest Fisheries Science Center and WARRN-West program leader.

“What is new is that we’re seeing animals with significant exposures to this toxin as far north as Washington, which is a major expansion from what we’ve seen in past events,” Lefebvre said. “The question for us is what happens next? Is this the new normal?”

“Although domoic acid levels on Washington beaches have dropped significantly, they are still above the seafood safety threshold of 20 ppm,” said Dan Ayres, coastal shellfish manager for the Washington Department of Fish and Wildlife. “With the re-opening of our very popular recreational razor clam fishery delayed at least six weeks and perhaps longer, the loss of tourist-related income to Washington’s small coastal communities continues to grow.” Testing of dead or dying wildlife during the algal bloom identified 36 marine mammals including whales, dolphins, porpoises, seals and sea lions and three seabirds with detectable levels of domoic acid. Although levels in many of the dead animals did not appear lethal, animals rapidly eliminate domoic acid from their bodies so the level identified in tests may not reflect the magnitude of the initial exposure. Researchers also noted that the animals found with domoic acid exposure may represent only a fraction of those affected, because others may not have washed ashore or been discovered.

“The toxins are commonly present in the food web but this year, with this unprecedented bloom, they’re likely having a bigger impact than ever before,” Lefebvre said. “Our concern is that there does appear to be a link between warm water and bigger blooms, so what does this tell us about future years with warmer conditions?”

Lefebvre praised the coordination and cooperation of WARRN-West partners in collecting samples and sending them to NOAA Fisheries’ Seattle laboratories for testing. The program is supported by NOAA, and many member organizations also contribute time and resources.