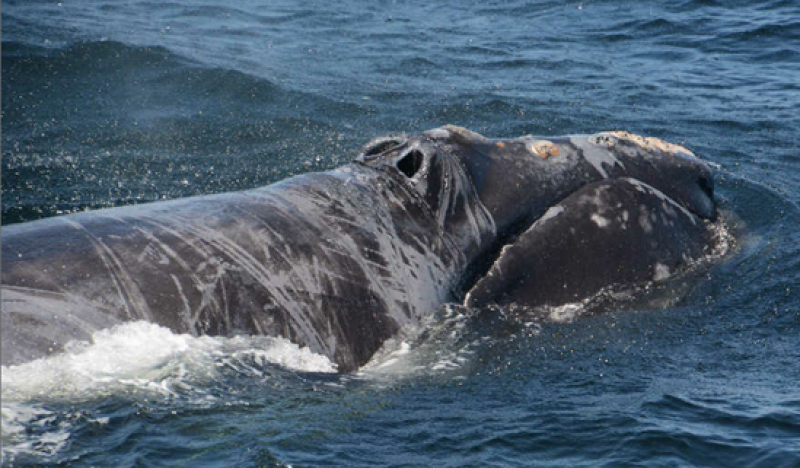 Photo: North Atlantic right whale (#4510) with evidence of sublethal entanglement injuries along the head and body.

NOAA Fisheries is adding morbidity cases (i.e., sublethally injured or ill whales) to the ongoing North Atlantic Right Whale Unusual Mortality Event  based on a new scientific veterinary peer-reviewed protocol. NOAA Fisheries and external experts in whale biology and health developed this protocol to provide a more complete picture of the North Atlantic right whale population’s health status and challenges impeding its recovery. The North Atlantic right whale is one of the world’s most endangered large whale species. The latest preliminary estimate suggests there are fewer than 350 individuals and 70 reproductive females.

These 37 sublethal injury or illness cases reflect vessel strikes, entanglements, and injuries or poor body condition of unknown cause. We are adding these individual whales to the 34 mortality and 21 serious injury cases in the UME for a more accurate total of 92 whales impacted by this event. To date, more than 20 percent of the population has been impacted by the UME based on the 2017 abundance estimate, which is when the UME began.

“These sublethal impacts, although not necessarily life-threatening, may be impeding health, growth, and reproduction of individual whales, and therefore recovery of the North Atlantic right whale species as a whole,” said Kim Damon-Randall, Director of the Office of Protected Resources.

This is the initial review of retrospective sublethal cases for the North Atlantic right whale UME. More whales may be added as more data become available.

The leading causes of the UME are vessel strikes and entanglement in fishing gear. Dead, seriously injured, and sublethally injured or ill right whales have been found in both U.S. and Canadian waters. The real number of right whales impacted by human interactions is likely much larger. Scientists have estimated that, on average, about only one third of North Atlantic right whale mortalities are actually detected.

Do not approach injured or dead marine animals, including whales. The most important step you can take to assist professional responders and scientists is to immediately report any sightings of injured, stranded, or dead whales. In the United States, call the Greater Atlantic Marine Mammal Stranding Hotline at (866) 755-6622 or the Southeast Marine Mammal Stranding Hotline at (877) 433-8299. In Canada, call the Marine Animal Response Society at (866) 567-6277 or the Quebec Marine Mammal Emergency Response Network at (877) 722-5346. You can also contact the U.S. and Canadian Coast Guards on VHF Channel 16.

Last updated by Office of Protected Resources on November 09, 2022