As animals swim, they shed scales, tissue, and waste, leaving traces of DNA in the water. Scientists collect a water sample and analyze the DNA found in it, identifying the species that left it behind without capturing a single animal. 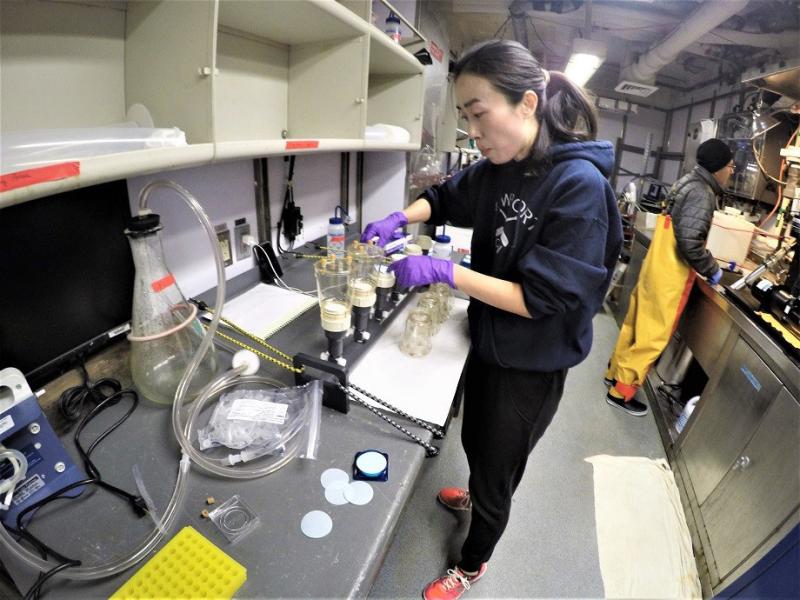 On crime shows, forensic investigators often use DNA evidence to track down criminals. Similarly, scientists in the northeast are using environmental DNA (eDNA) to identify fish communities and monitor ecosystems. For the first time, NOAA Fisheries scientists have sampled for eDNA in Long Island Sound and across a broad area of the Atlantic continental shelf.

First used to detect microbes, the use of eDNA has gone from visionary to practical over the past decade. This tool is now used to study the biodiversity of marine animals. 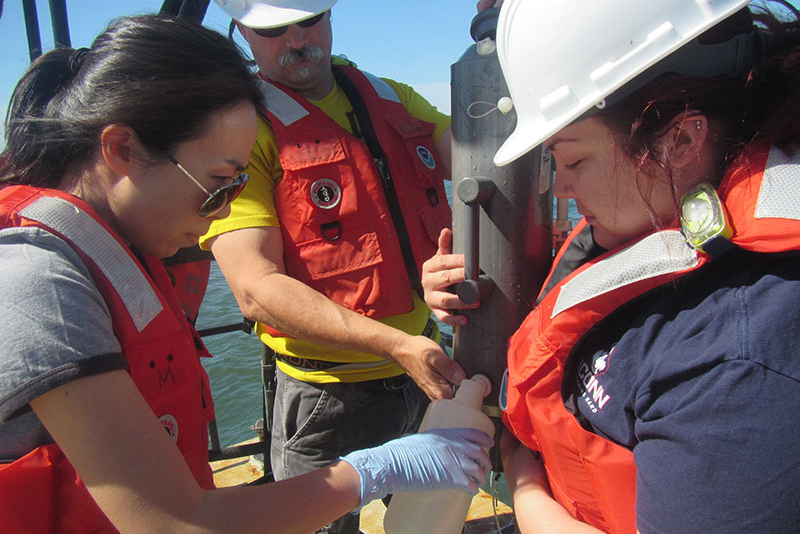 A water sample is first collected from the ocean and filtered. The scientist copies a specific part of the DNA. The target region of DNA is copied millions of times, amplifying it enough that it can be sequenced.

Compared to traditional DNA sequencing, the sequencing used for eDNA analysis allows scientists to look for many species in the same sample. The final step is like a matching game, in which the DNA sequences are compared with a reference library of known species to find a match.

The eDNA method is particularly useful for detecting species that are not easily captured, including rare or migratory species. It can also help in areas that are difficult to sample because of challenging ocean conditions, sensitive habitats, or a rugged seafloor. An eDNA analysis provides a snapshot of the community of species at the time of sampling and over time. This can help us detect shifts in marine ecosystems.

Yuan Liu, a biologist at the Northeast Fisheries Science Center’s Milford Lab, applied eDNA sampling to the lab’s GoPro aquaculture project. This is an ongoing effort that uses cameras to study the interactions between shellfish aquaculture gear and the environment in Long Island Sound. “My goals were to add a sampling method to the GoPro project and test my methods in an estuarine environment before applying them to open ocean surveys,” Liu explained. Her findings were recently published in Frontiers in Marine Science.

Liu used eDNA methods to analyze water samples taken from an oyster farm and a natural-rock reef over three months: June, July, and August 2017. She detected 17 common fish species, including scup and black sea bass, and 25 species rarely caught in the area, like winter flounder and the northern stargazer. She found more variation between months than between the two habitat types. Importantly, she compared her results with the catches of a Connecticut state agency trawl survey. She directly compared the  eDNA results with a June 2017 trawl survey and found:

This shows that eDNA can add detail to fisheries survey data.

Liu was surprised to detect Atlantic thread herring, a forage fish that doesn’t typically stray north of Maryland, in the July samples. State trawl records showed that one Atlantic thread herring was caught a few years prior. Her research added a second line of evidence that their range is expanding to include Long Island Sound. “This is a perfect example of the way we can use eDNA to study the shifting distribution of species in a changing world,” Liu noted.

eDNA on the Continental Shelf—Enhancing the Ecosystem Monitoring Survey

After refining her methods in Long Island Sound, Liu spent 18 days sampling continental shelf waters aboard the NOAA Ship Gordon Gunter. She joined the Fall 2019 Ecosystem Monitoring Survey and worked with the crew and fellow scientists. She collected 200 water samples from 18 stations along the East Coast from the Carolinas to the Canadian Maritimes. 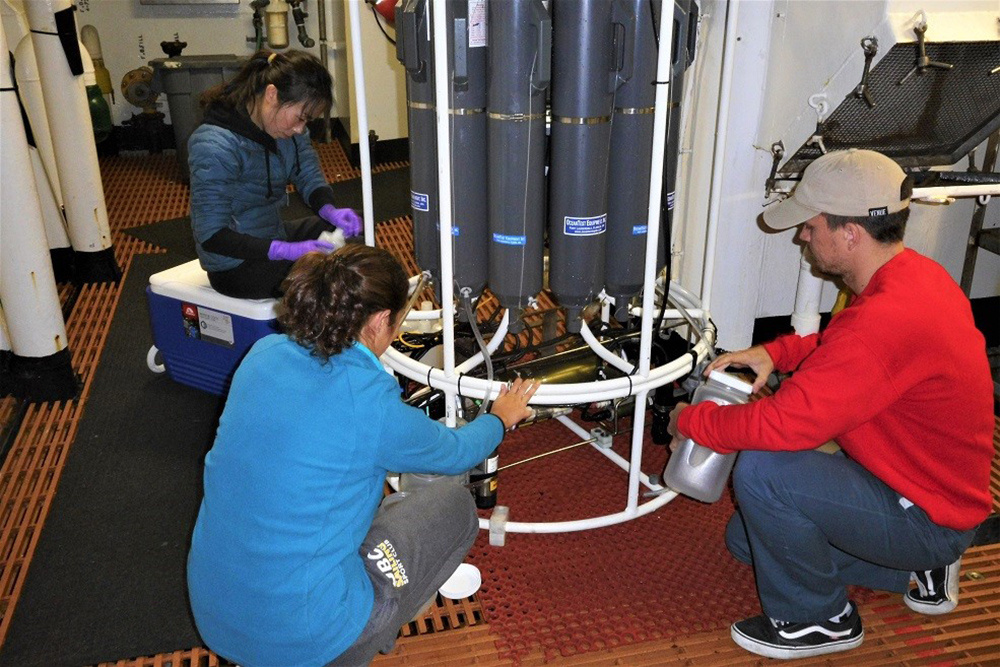 Researchers Kyle Turner, Virginie Sonnet and Yuan Liu gather around the Niskin bottle rosette to get their portions of the seawater collected at a water sampling station during the fall 2019 Ecosystem Monitoring Survey cruise on the NOAA Ship Gordon Gunter. Photo:NOAA Fisheries

In addition to studying fish biodiversity throughout the geographic range of the survey, Liu took samples in different ways to confirm her offshore sampling methods. In particular, she took different volumes of water to figure out the minimum amount needed, called the “detection limit.” She used three different systems to collect the samples, and sampled multiple depths at the same site. From these data, she’ll determine the best way to sample in the future.

Of her experience with the survey, Liu said, “With all the water sampling and filtering, I didn’t have much free time, but when I did I would go to the bridge of the ship and learn about seabirds and marine mammals, as observers would point out rare and exciting finds. I also played my first ever bingo game and won a hat!” Liu said. 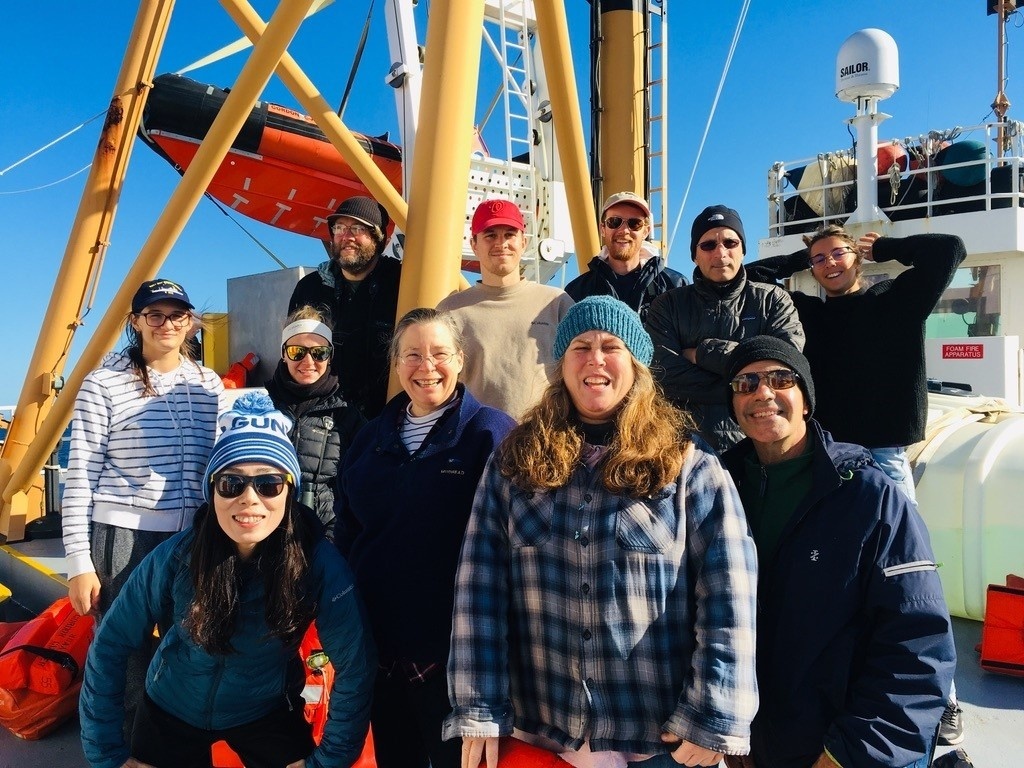 eDNA can detect rare species and add important detail to fishery survey data. However, it can’t yet determine age or size of animals, or predator/prey relationships. This information can only be gleaned by taking samples directly from animals. Because of this, eDNA analyses complement rather than replace data obtained in traditional fisheries surveys. Combining the two allows researchers to build a more comprehensive view of marine communities.

“Using eDNA analysis is like having another net for sampling. There are strengths and weaknesses to each type of sampling gear. If we’re going to conserve marine resources, we need to cast a broad net,” said Richard McBride, Chief of the Population Biology Branch and northeast co-lead for the NOAA ‘Omics Strategic Initiative.

As scientists bolster the reference library by adding more species, eDNA becomes an even more reliable tool. In the future, it may be used to help monitor protected species. It might also be used to study changes in fish communities associated with climate change and offshore wind development.