Shellfish aquaculture can increase food production, create economic opportunities in coastal areas, and enhance natural harvests. To foster successful, responsible, and sustainable aquaculture for the future, we need to understand how aquaculture gear may interact with marine ecosystems. Off-bottom multi-tiered oyster cages are growing in popularity as a method for culturing large numbers of oysters on a small footprint. These cages create complex structures that may attract fish and other animals seeking food sources, shelter, and refuge from water currents or protection from predators. Because of the cages' structure, they may function like naturally occurring rock reefs, providing beneficial habitat to ecologically and economically important fish and invertebrates.

Understanding if and how oyster cages function like naturally occurring habitats may help with regulatory and permitting processes when siting new shellfish farms. Regulatory challenges have been identified as one of the major bottlenecks to shellfish aquaculture expansion in the United States. This project is a close partnership between the NOAA Northeast Fisheries Science Center and Greater Atlantic Regional Fisheries Office. This partnership ensures that the results from this study will inform the regulatory review process. Our findings may support a more comprehensive review process for shellfish aquaculture projects, which considers environmental benefits as well as impact. Next steps include:

Naturally occurring rock reefs create habitat complexity in an often otherwise flat and featureless landscape. Rock reefs add vertical height in the water column, crevices and shading for hiding, and surfaces on which epibenthic organisms can colonize and grow. Complex habitats like these often have greater density and diversity of species than a less complex habitat like a flat seafloor. Oyster cages offer similar features, and may be providing benefits similar to those of rock reef habitats. While few studies have investigated aquaculture gear as habitat, extensive anecdotal evidence from commercial shellfish growers suggests that both fish and invertebrates may be using the gear as habitat.

Commercial oyster growers use a variety of cultivation methods, and differences in gear structure may influence how farms interact with the local fish community. We examined two commonly-used styles of oyster bottom cage, to see if structural differences affected fish abundance, community composition, and behavior. Shelf and bag oyster cages have three open shelves with bags of oysters, which creates a variety of spaces for fish to use. Stacked tray cages have three enclosed trays of oysters with smaller-sized openings, which may restrict the size of fish that are able to access the cage interior.

This research is being funded by the Northeast Fisheries Science Center and NOAA's Office of Aquaculture.

Our study sites are all located in Long Island Sound. We studied oyster cages at a high density oyster cage farm, single cages at low density on sand and shell seafloor, and boulders on a rock reef, in partnership with the Charles Island Oyster Farm.

The comparison of cage styles was conducted on three oyster cage farms:

We used a series of GoPro cameras to record activity around the structures and document the abundance and behavior of fish around shelf and bag style oyster cages and naturally occurring rock reef habitat. Using cameras as opposed to diver observations reduced the amount of human interference with fish activity. During all camera deployments near cages or boulders, timers were used to record video for 8 minute intervals every hour from 7 a.m. to 7 p.m over a complete 12-hour tidal cycle. This enabled us to sample fish abundance and activity through changing environmental conditions over the course of a single day.

Cages were brought onboard a boat, cameras were mounted on them, and then the cages were redeployed. Video recording started the following day and we retrieved cameras two days later. The oyster cages themselves stayed in the water for the entire field season. 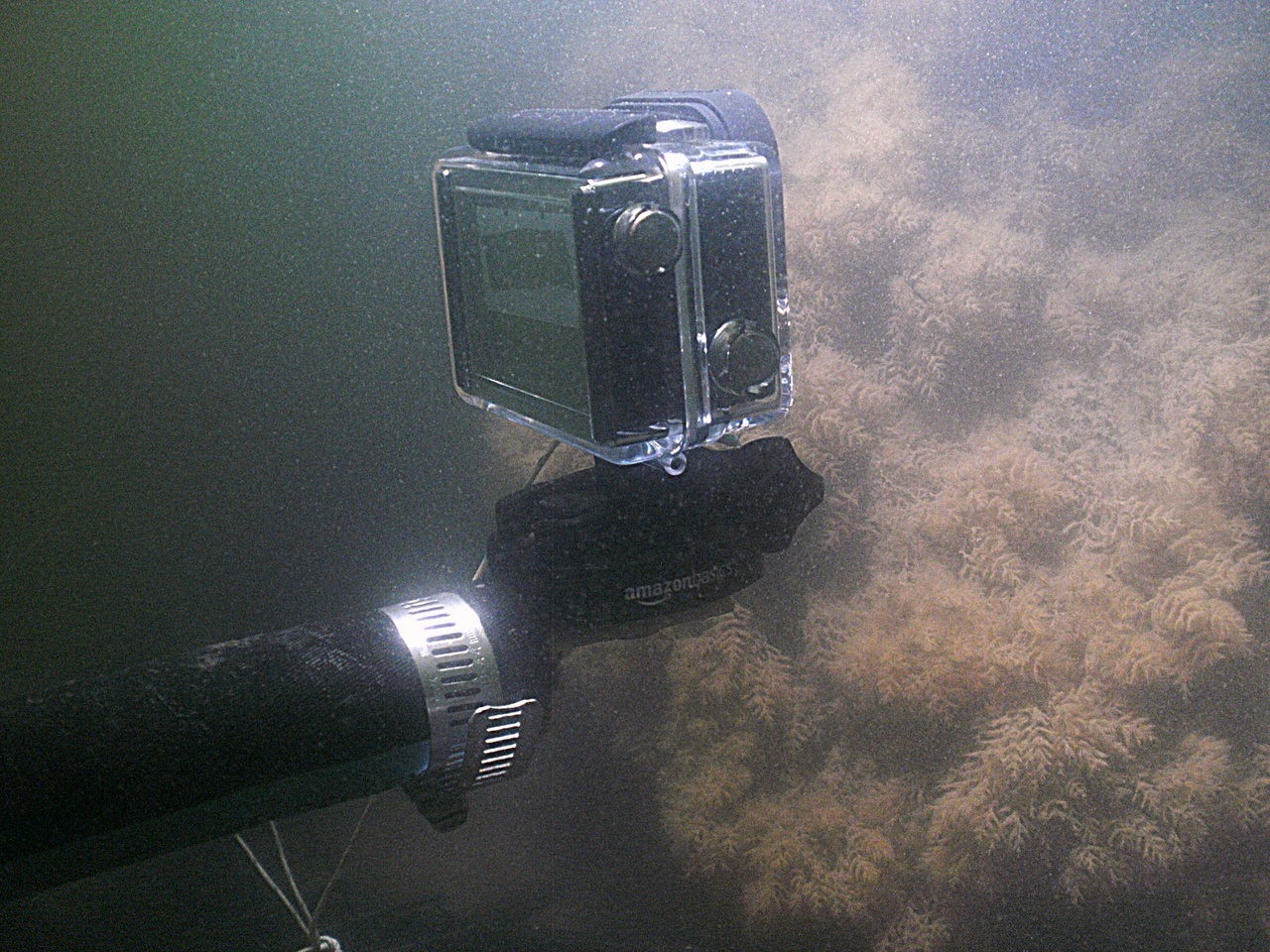 To record activity at naturally occurring rock reef habitat, we constructed four stands with dual camera mounts. We then placed the platforms near boulders within the rock reef site where they remained for the entire field season. Divers then put the cameras on the stands and retrieved the cameras two days later. The two cameras provided a field of view similar to that provided by our oyster cage camera system: one looked across the top of the boulder and one looked down the side of the boulder to where it met the seafloor.

To compare fish interactions with different styles of oyster cages, we placed cage pairs at three Connecticut shellfish farms. Two cages of each type were deployed at shellfish farms in Milford, Norwalk, and Westport, to compare fish interactions between cage styles at multiple farms across a broader geographic area. We collected video using timers as previously described.

Generally we deploy cameras during the active oyster growing season in Long Island Sound, from June to September. During the fall and winter of 2019–2020, we also deployed cameras monthly from October until February in Milford, to capture seasonal differences in fish activity around the gear and natural habitat.

To compare the habitat quality provided by shellfish aquaculture gear to that of natural habitat, we will collect body length measurements of fish using stereo cameras at multiple farms and natural rock reefs in Long Island Sound during the 2022 field season. Using these data, we will determine population size structure and life history stages of fish associated with oyster cages and boulders to better understand the ecosystem services provided to fish by these structures. In 2023, we will use fish traps to collect juvenile and small fish near oyster cages and boulders. Then, we will measure their body weight and length, and use this information to estimate the physiological condition of fish around gear and natural habitats. Using these methods, we will be able to assess the relative quality of oyster cages and boulders as habitat for young or small-bodied fish.

During camera deployments, we also collected environmental data. We used data loggers to record water temperature and light intensity every 15 minutes throughout every deployment. Light is an important factor affecting visibility and video quality and it may influence fish behavior. Because changing tidal currents may also influence how fish interact with cages and boulders within rock reefs, we used tilt current meters to collect information on speed and direction of water currents. We took measurements once every minute throughout each deployment. We attached a current meter and temperature/light data logger to one cage at each field site and to a spare camera stand at the rock reef. Using handheld probes, we collected additional environmental data (such as salinity and dissolved oxygen) during trips to and from each site.

When fish and other animals swim, they shed scales, tissue, and waste, leaving traces of DNA in the water. Although this DNA is diluted, it can be extracted and analyzed. Each time we retrieved our GoPro cameras, we collected water for environmental DNA (eDNA) analysis. The eDNA method we used combined DNA-based species identification with high throughput next generation sequencing, or sequencing millions of copies of DNA in the environment simultaneously, to characterize the fish communities associated with oyster cages and rock reefs. Using eDNA we detected fish in the area surrounding the cages and rock boulders, even when they were not captured on the video. This may help create a more complete picture of fish community composition than video alone. Compared to capture-based methods, eDNA analysis is a comprehensive, rapid, non-invasive, and cost-effective method.

We have collected and analyzed more than 1,000 hours of underwater video from the 2017–2019 field seasons for fish abundance and community composition. Because of challenging visibility in the water column and the need for nuanced fish behavior analysis to understand habitat use, technicians perform all video analysis.

To date, we've observed 20 species of fish in our videos associating and interacting with oyster cages. The four most common species observed in video have been:

Less-commonly observed species in videos include:

We’ve also observed a few fish species that have fallen out of cages during camera deployment/retrieval, but were not yet observed on video, including:

Identifying fish to species level and counting fish are only the first steps in our video analysis. We are also analyzing fish behavior in the video we have collected.

We've partnered with two fish ecologists, Peter Auster from the University of Connecticut and the Mystic Aquarium, and Christian Conroy from the University of New Haven, to identify and quantify the different ways that fish are using oyster cages. So far we've seen fish feeding on the colonizing organisms that grow on the cages, little fish escaping from bigger fish by darting inside the cage itself, female fish retreating inside the cage to escape male fish of the same species, territorial behavior, courtship, and fish spawning.

Our analysis of eDNA samples collected during summer 2017 was recently published in Frontiers in Marine Science.

Rutgers University received funding from the Northeastern Regional Aquaculture Center to investigate fish and invertebrate interactions with oyster aquaculture gear and natural habitats using GoPro cameras in New Jersey. Their project engages oyster growers in Barnegat Bay that use floating oyster bags and oyster bottom cages. Natural habitats included a marsh edge and bare sandy bottom. Scientists have posted video clips from the project on the lab’s YouTube channel, and you can find more project information at the lab’s website.

The Nature Conservancy and Northeastern University have partnered to investigate how oyster farming gear provides habitat for other marine species using GoPro cameras in Massachusetts. They are working with commercial growers in Duxbury and Cotuit who use shelf-and-bag bottom cages, bottom trays, and OysterGro gear on both intertidal and subtidal farms. Natural habitat and control sites include constructed oyster reef, rocky reef, and bare sediment. The Nature Conservancy produced a video about this local project and how it contributes to the organization’s global aquaculture program.

We have shared our video collected in Milford with partners at the University of New Haven, who are analyzing videos of black sea bass and quantifying territorial and station-keeping behaviors around oyster cages and rock reefs.