Window to an Underwater World 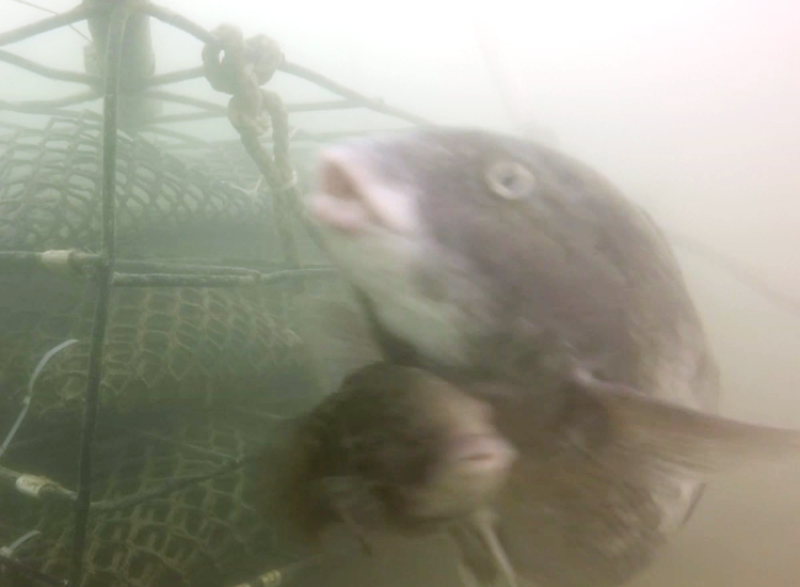 Scientists at the NOAA Fisheries Northeast Fisheries Science Center's Milford Laboratory are using GoPro cameras to determine if oyster cages used in shellfish aquaculture provide similar habitat for fish to naturally occurring rock reefs. Oyster growers often cultivate oysters in off-bottom vertical cages under water. These cages allow growers to efficiently use the seafloor with a smaller footprint as well as keep their valuable product safe from predators. Many fish are attracted to structure, whether natural or artificial, and members of the aquaculture industry have long reported finding fish and invertebrates around their cages. The project, funded by the NOAA Office of Aquaculture and the Northeast Fisheries Science Center, grew out of these observations, and intends to find out if oyster cages provide habitat.

From May through September 2018, a team of scientists and research divers collected 27 hours of underwater video per week in Long Island Sound during the project’s second field season. Study sites included an active shellfish lease and the Charles Island rock reef. Biological technicians Paul Clark and Gillian Phillips are now in the midst of the most time consuming and rewarding aspect of this project – the video review and data analysis.

As Gillian and Paul review the videos, they most frequently see four common Long Island Sound fish species around the cages: black sea bass, scup, tautog (blackfish), and cunner. However, these fish use the cages differently. For example, transient scup use them opportunistically, while juvenile black sea bass seem to live around the cages.  Understanding how these species use habitat is important, as black sea bass and scup are commercial species, and locally, tautog supports a recreational fishery.

In addition to the “big four,” summer flounder, butterfish, banded rudderfish, and sea robins have also been observed using this habitat. Spider crabs are the most common invertebrates seen in videos. Each time the cameras were deployed and retrieved, the team took environmental measurements including temperature, salinity and dissolved oxygen. When the warmest seawater temperatures were recorded in late August, fish more typical of the southeastern United States were observed around the cages. For example, one video captured a school of yellow jack.

The rock reef site represents a naturally occurring habitat, and videos recorded there typically feature bushy bryozoans swaying in the current. Paul notes that the videos can lull you into a peaceful state of mind. Alternatively, Gillian warns, “You’ve got to make sure you don’t get seasick on land watching some of these videos!” The reef appears to attract smaller fishes compared with the cages, and reproductive behavior has not yet been observed there. 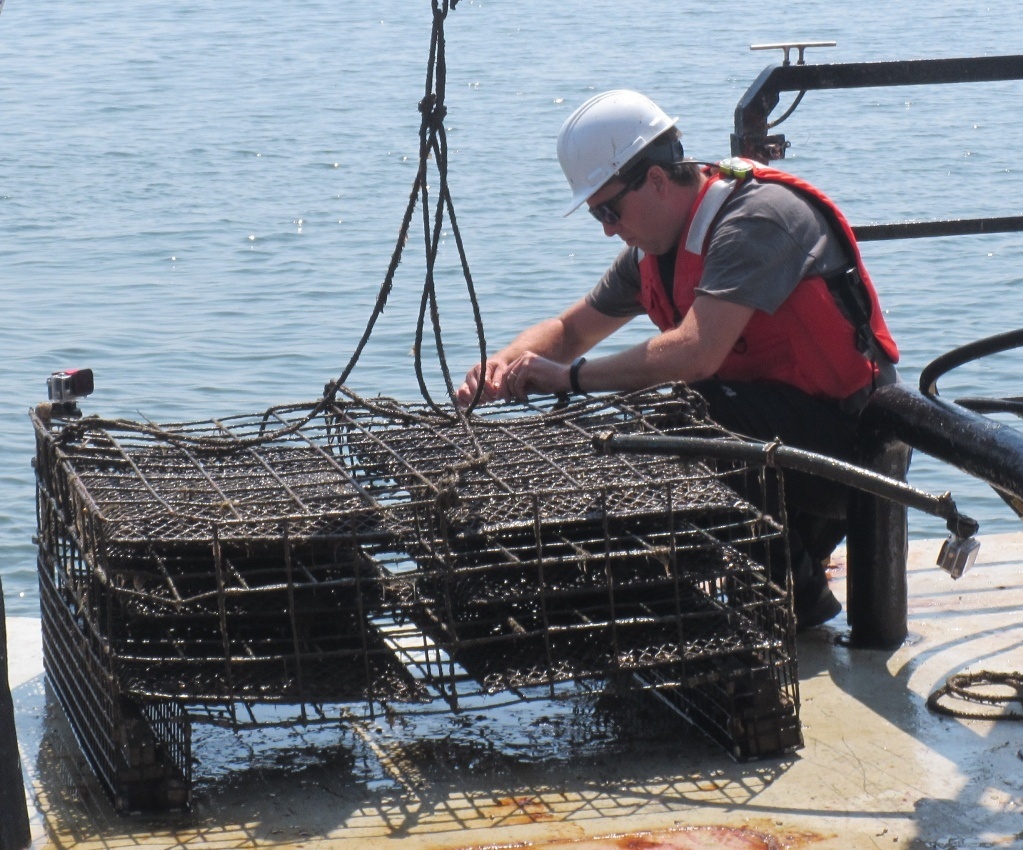 GoPro camera being mounted on oyster cage to record activity.

Gillian and Paul review the videos using software specifically designed to help scientists analyze animal behavior so they can count how many fish are using the habitat at a given time. For this study, they count the maximum number of individual fish of each species present in a single frame within a one-minute segment of video. This commonly used metric for counting fish associated with structures is called MaxN. Using this metric for relative abundance helps prevent overestimation that can occur when individuals that pass by the camera more than once are double-counted.

The research team created a set of distinct behavioral categories in collaboration with fish ecologist Dr. Peter Auster from the University of Connecticut and the Mystic Aquarium. The scoring system allows Paul and Gillian to code such behaviors as: foraging, sheltering, territoriality, reproduction, schooling, and escape. The software is flexible, allowing species and behaviors to be added as the project develops. The first time Paul and Gillian review a video, they count fish to calculate relative abundance, while the second time through they score it for behavior.

With two scientists counting fish and scoring behavior, it is critical to make sure they are analyzing videos consistently. The video analysis software allows the team to compare agreement between two or more observers, using a common metric to test how well their scores matchup. Initially, when scoring videos by themselves, Paul and Gillian scored videos for fish abundance with about 77% agreement. By scoring a series of videos together, they improved their consistency to better than 90% agreement. Paul notes that he was initially overlooking the well-camouflaged scup and young-of-year black sea bass near the gap between the seafloor and oyster cage. After watching the videos as a team, he was better able to detect their subtle movements. “This process made us better at counting fish and identifying behaviors,” Paul affirmed.

When visibility is a challenge, as it often is in Long Island Sound, Paul has taught Gillian to look very closely at the external features of the fish and its movement. For example, when visibility is good, a stripe running along the lateral line of a juvenile black sea bass distinguishes it from a scup. Juvenile black sea bass also tend to stop and start, especially when foraging, whereas similar-looking scup move more fluidly. Differences in movement can help distinguish between species when visibility is limited. Gillian has sharpened her fish and invertebrate identification skills by working with Paul, who specializes in taxonomy. This type of identification takes a trained eye, and Gillian notes, “The more fish you see, the more comfortable you become with identification.” 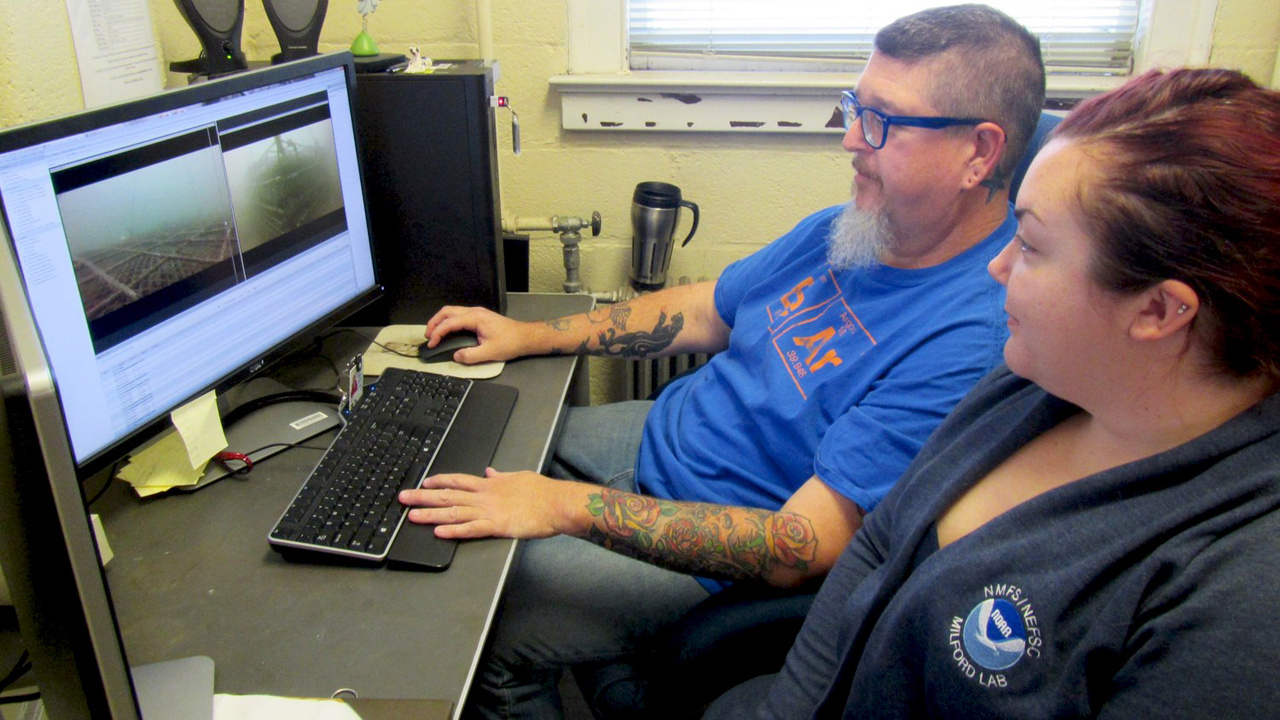 Fish have most frequently been observed foraging and sheltering in and around the cages. The team has also observed courtship and reproductive behavior.

Broadcast spawning by a male scup in front of the oyster cage caught the attention of both Paul and Gillian. To their knowledge, this is the first time spawning behavior of scup has been video documented in the wild. Based on her days of studying animal behavior at zoos and aquaria, Gillian says this behavior is a sign that an animal has found high-quality habitat and is healthy enough to spend energy on reproduction.

Paul noted an intriguing video of a subadult male tautog courting a female when there was no adult male present. He found this behavior fascinating, as it is an example of the fisheries concept of “sneaker males”: male fish that are not the largest or strongest, but still manage to pass on their genes by being in the right place at the right time.

Paul hopes the cameras are able to capture a predation event next – particularly with bluefish or striped bass, which are known to prey on many of the species observed in the videos.

Gillian hopes to find discrete examples of each behavior they’ve identified thus far, as the team is creating an archive to match fish behaviors with video examples. This will be a powerful tool for anyone who wants to learn about these fish.

“In general, I try not to have many expectations,” Gillian says of the videos. “That way I’m always surprised by what I see. That’s what makes it fun.”

What’s Next for the Project?

While the field season has ended for 2018, the team plans to deploy cameras once a month from December to February. This will allow them to study how the fish assemblages using the cages vary by season.

As many videos have included foraging behavior, Paul plans to incorporate food habits into this study. He has expertise in performing fish gut content analysis, a methodology which could help determine whether cage-associated fish are feeding on the invertebrate community growing on the cages.

So far, the team has only been able to collect video during daylight. A new collaboration is in the works for next season that may include using sonar to study the species using the cages at night.

Reflecting on the project, Gillian says, “Oysters are very important to aquaculture and the economy, but if we can also demonstrate that the growing process benefits fish such as black sea bass, that’s very important for the constituents along Long Island Sound.”

Paul added, “Counting fish seems like it could be a chore, but to me, it’s like watching a nature documentary. You never know what species or behavior you’re going to see next!”

Learn more about the GoPro Aquaculture Project on the project page »