TT40: The First Hawaiian Monk Seal to Undergo Surgery for a Fishhook Removal 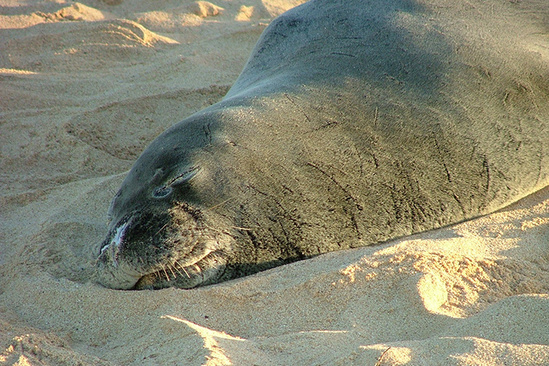 Notable Facts: Relocated from Laysan Island to Hawai‘i Island in 1994 as part of a successful effort to reduce female seal mortality due to male aggression. In 2004, he was the first ever Hawaiian monk seal to undergo an anesthetic and surgical procedure to remove an ingested fishhook.

The monk seal of the month for August is TT40, an adult male who was born on Laysan Island in 1984.

When monk seal researchers arrived on Laysan that year, a roly poly baby boy seal received his plastic flipper tags, becoming known as TT40 from that point forward. He led a long and storied life and was involved in a variety of efforts to conserve his species. 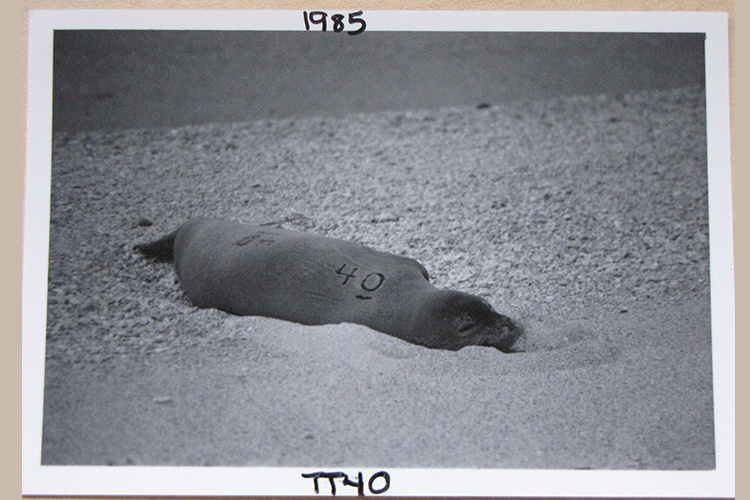 TT40's home island received much conservation attention during the first decade of the seal's life. Researchers had long documented a skewed sex ratio at Laysan Island, in which many more male than female seals were present. Additionally, multiple-male aggression — when several adult males compete to mate with a single seal at the same time — at Laysan caused an unusually high frequency of injuries and deaths of female seals. Scientists had documented this aggressive mating behavior at other sites in Hawai‘i, but it was especially common at Laysan Island. In fact, an average of 4% of adult females were dying from such injuries every year from 1983 to 1994.

The unbalanced adult sex ratio was thought to be contributing to the prevalence of male aggression at Laysan Island, and the resulting mortalities of adult females only skewed the sex ratio even more. To address this problem, NOAA relocated 21 adult male seals from Laysan Island to the main Hawaiian Islands in 1994. With those males off the island, Laysan's sex ratio became nearly balanced and the rate of female mortality External Link Disclaimer from male aggression fell by over 90%!

TT40 got caught up in this conservation scheme in 1994 when he was 10 years old. Researchers strategically chose which males to remove from Laysan Island, keeping in mind the social structure there. Male monk seals exhibit a hierarchy, whereby top-ranked males are dominant over all those at lower ranks. Researchers knew the rank of each male seal by carefully recording the behavior of male seal interactions with each other. It was notable that subordinate males tended to be involved in multiple-male aggression. To minimize the risk of disrupting the social structure, researchers targeted only subordinate males for removal, especially those individuals who had exhibited aggressive behavior towards female seals. 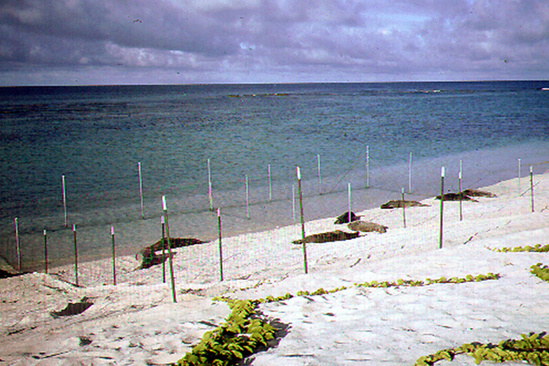 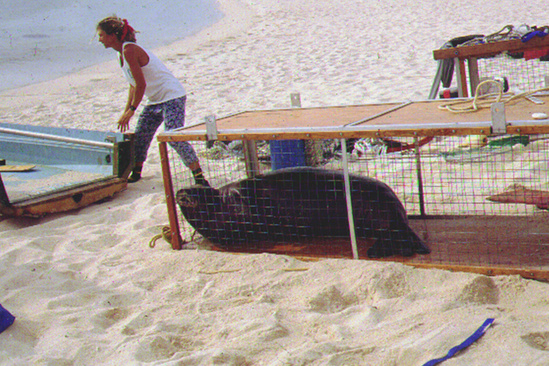 Though he didn't appear to show aggressive behavior, TT40 was selected for removal because of his subordinate status. He was transported by ship and released offshore of Hawai‘i Island. Neither TT40 nor any of the other relocated males are known to have engaged in any multiple male aggression incidents since leaving Laysan.

TT40 stayed on Hawai‘i Island for at least a year, but moved around and eventually settled on Kaua‘i. In 2004, NOAA scientists included TT40 in a foraging ecology and health study and began tracking his movements with an attached satellite tag. 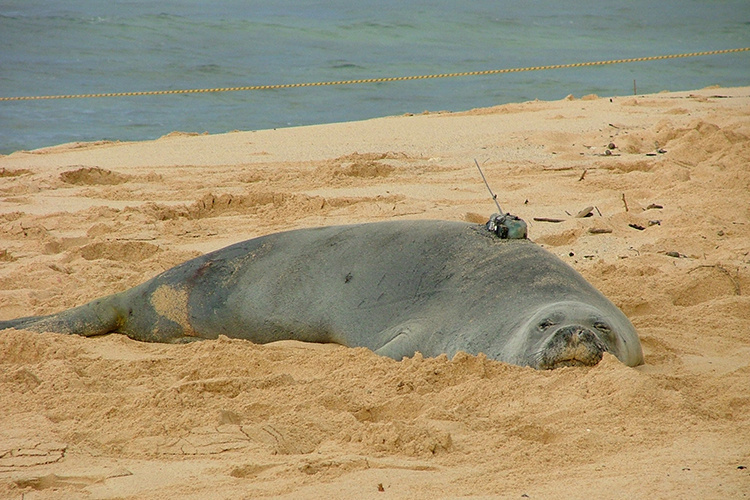 TT40 in 2004 on Kaua‘i with a satellite tag as part of a study on monk seal foraging and health and disease.

Later that year, TT40 was seen with about 15 feet of monofilament line trailing from his mouth. Had he ingested a fishhook? A seal rescue team captured TT40 once again and flew him from Kaua‘i to O‘ahu, courtesy of the US Coast Guard. Veterinarians performed a minimally invasive endoscopic procedure, which involves looking inside the body using a flexible tube with an attached camera, under general anesthesia. The procedure revealed that TT40 had indeed swallowed a large circle hook and associated gear attached to the monofilament line. Abdominal surgery was the only way the hook could be removed, so the veterinary team scheduled surgery for the following day. 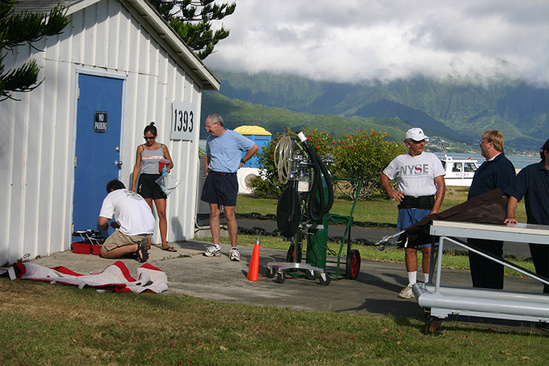 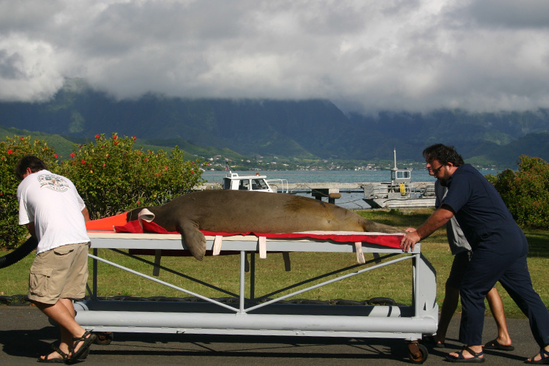 Left: Researchers and veterinarians preparing to anesthetize TT40. Right: TT40 under anesthesia on his way to surgery. 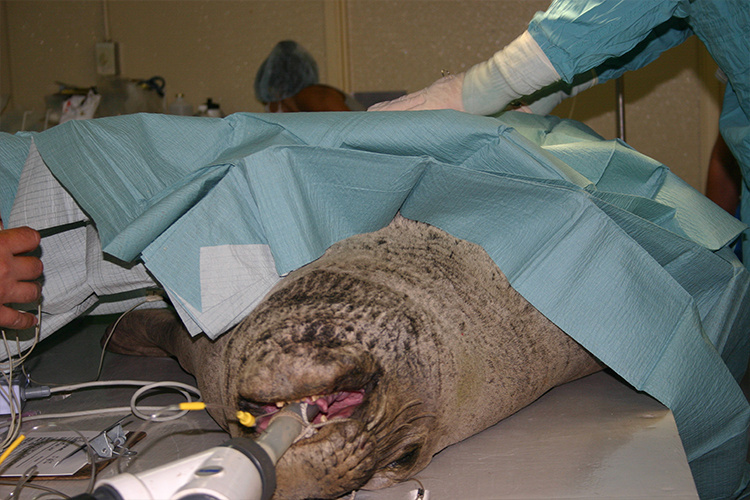 TT40's operation was the first surgical procedure under anesthesia to remove an ingested fishhook from a Hawaiian monk seal. Despite the risks, TT40 remained stable during and after the more than five-hour-long surgery.

TT40 readily ate fish just 30 hours after his surgery, and he maintained an excellent appetite throughout his recovery period. Three weeks after his surgery, TT40's incision was sufficiently healed. He received a new satellite tag and was released on Kaua‘i on July 6, 2004. 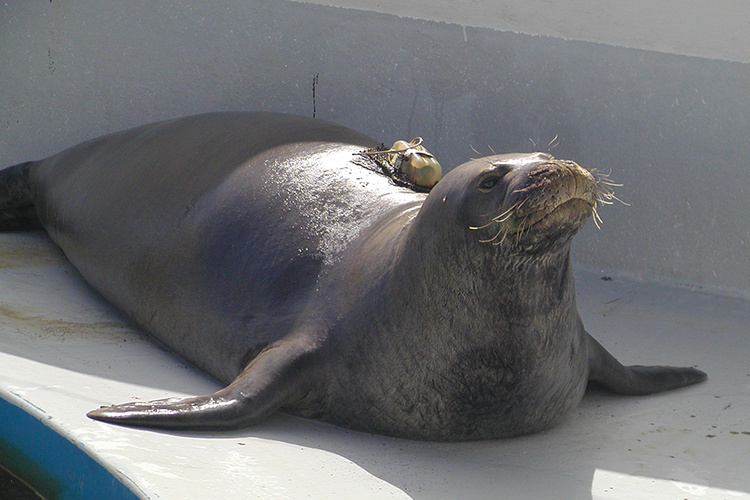 TT40 at a temporary holding facility on O‘ahu where he recovered from his surgery.

TT40 was fortunate that the telltale fishing line was spotted early. Other monk seals have died from fishhook ingestion or have undergone surgery due to complications associated with hookings.

After his triumphant return to Kaua‘i, TT40 lived out his final years there. In 2011, he was found dead of natural causes on the beach at the age of 27. Despite the challenges he overcame, he lived a long life for a monk seal and continues to live on in the hearts of the many who cared for and monitored him over the years. 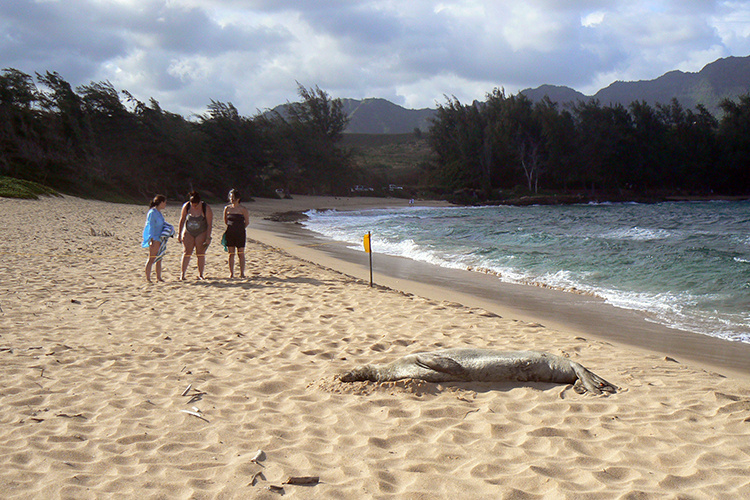 Observers respectfully viewing TT40 from a distance while he rests on the beach.