It’s hard to imagine science without technology and as technology advances, scientists can do research and follow lines of inquiry that would’ve been difficult if not impossible to do in the past. Acoustic telemetry – the use of transmitters and receivers to track animals – is a technology that has not only become more sophisticated over time, but it’s also allowing fisheries scientists from our Orono Lab to answer questions about Atlantic salmon (Salmo salar) smolt behavior and survival that would have been incredibly challenging just a short time ago. 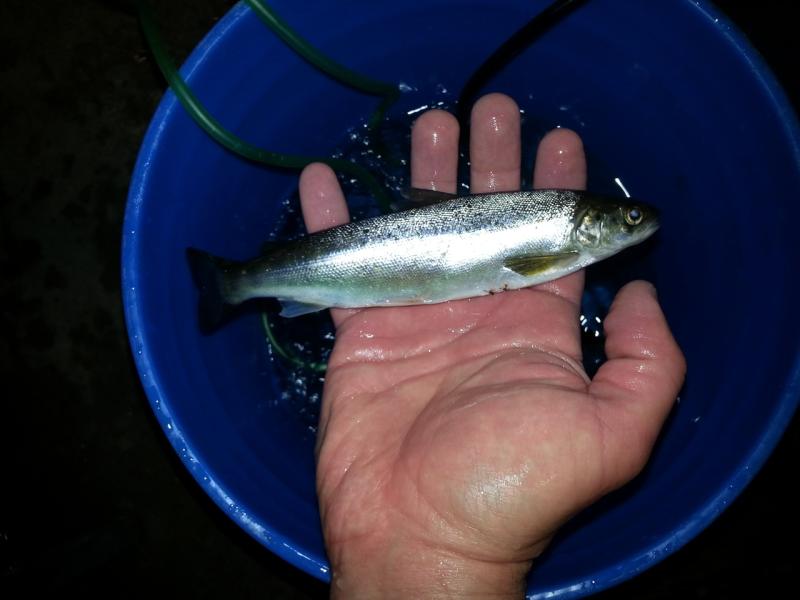 Every Smolt is Sacred

Many of the Atlantic salmon populations within the southern part of the species’ range  are critically low, while other populations have been extirpated. Because Atlantic salmon smolt survival in the marine environment  is consistently low, current restoration efforts focus on a “numbers game”: get as many smolts to the ocean as possible. To successfully do this, scientists must first understand smolt behavior and survival. This past spring research fishery biologist Jim Hawkes and others from our Orono Lab tagged 202 hatchery-raised Atlantic salmon smolts with small transmitters to better understand smolt behavior and survival in Maine’s Narraguagus River. “The questions we wanted to answer were specific to migration ecology - how fast [are smolts moving], where did they go, what were their behaviors, and if they died, where did they die. If they died, could we relate that with time of day? If there were losses, were they in the same location?” said Hawkes.

Acoustic telemetry requires two things – a transmitter (or tag) and a receiver. The small battery-operated transmitter emits an ultrasound frequency programmed to “ping” at a specific rate. When a tagged fish comes within a specific distance, a receiver programmed to recognize the transmitter’s specific frequency records the presence of the tagged fish. To tag salmon smolts, scientists surgically insert a small transmitter about the size of a small Jolly Rancher into the abdominal cavity. Upon recovery, smolts are released to the river where they travel downstream toward the ocean as part of their migration. The team placed receivers at targeted locations along the migration route to help answer their questions about speed, location, behavior and death. One of the brilliant things about these transmitters is that each one provides individual-specific data, allowing scientists to track each individual fish separately while hundreds can be tracked simultaneously. Depending on the ping rate, the transmitter battery will last about three months. However, this technology continues to advance as scientists develop ways to power transmitters with energy generated from fish movements.

In the beginning of telemetry studies, scientists would tag their animals, release them, and track them by using large unwieldy antenna. This took a lot of time moving around trying to pick up a detection signal; it was like searching for a needle in a haystack. “They’d be out there for hours or days figuring out where fish are and where they’re going. Now with the receivers – each of the receivers costs just over $1000 – if you relate that to the people hours, there’s no comparison,” said Hawkes. With acoustic telemetry, he said, “you can set it and forget it,” and that past acoustic telemetry couldn’t provide 24-hour coverage in all the environments you’d want to focus on. Today, acoustic telemetry allows scientists to generate targeted, high-resolution data in various environments with continuous 24-hour coverage.

Other benefits have emerged with acoustic telemetry. “It allows you to study your target species as well as collect data from other species in the area that are tagged with the same kind of transmitter,” according to Hawkes. This means if other researchers have implanted the same kind of transmitter into their fish, the salmon team’s receivers will record their pings. “We operate a cooperative network of about 200 receivers with the University of Maine’s School of Marine Sciences and the USGS Coop. group at the University of Maine,” he said. “We’re partnering with them to deploy receivers throughout the Penobscot River, estuary, and bay, and in other river-mouths along the [Atlantic] coast.” All three groups manage their own set of receivers, and all data are shared. “We want to make sure researchers get their data and are able to use it to further the knowledge of their species studied,” Hawkes said.

Data sharing doesn’t end there. “We’ve had some receivers on lobster traps out near Matinicus Island, Maine and have detected white sharks, bluefin tuna, and a variety other species. We downloaded the data, identified unknown detections, and forwarded the transmitter numbers along to the telemetry manufacturer. So we’re always sharing data.” In fact, data sharing has no borders. The Ocean Tracking Network (OTN) off Halifax, Nova Scotia, maintains an array of receivers extending more than 150 kilometers offshore. If one of Hawkes’ tagged smolts passes by and is detected, OTN will let him know. Other Canadian researchers participating in OTN have outfitted grey seals with a new kind of tag system that is both transmitter and receiver, essentially turning seals into mobile receivers. When their seals swim around and detects one of Hawkes’ tagged smolts, the smolt data is recorded and later shared with Hawkes. “Communication and data sharing go a long way in advancing the knowledge of tagged species,” Hawkes said.