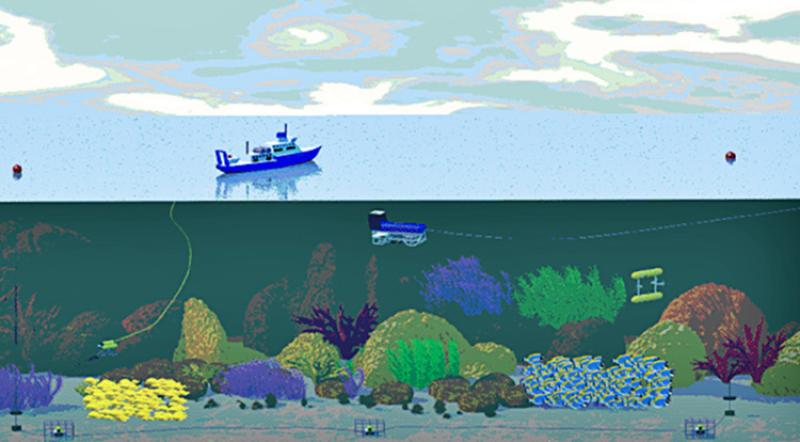 Figure 2. The observation test bed, including: 1) the longline with three attached observation pods, and 2) the ROV, AUV and CBASS moving optical systems. Note in actual operation the three vehicles would be deployed one at a time and much closer to the bottom to be within the field of view of each observation pod. 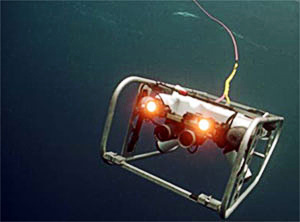 Most fishery-independent estimates of relative stock abundance produced at the Alaska Fisheries Science Center are provided by bottom trawl surveys. Bottom trawl surveys, however, cannot successfully sample in areas that are too steep or rocky and cannot randomly sample the populations of species, such as Atka mackerel and rockfish, which preferentially inhabit these areas.  For some of these species, most of their preferred habitat cannot be sampled and, therefore, the trawl survey data is considered unusable for stock assessment models. For other species with broader habitat preferences, the survey information is considered usable for stock assessment models, but often with concerns about how the sampled biological characteristics or relative abundance estimates relate to the whole population.

The issues associated with untrawlable habitat are not unique to the Alaska Center, nor solely to other NMFS Science Centers responsible for rockfish fisheries management, but are national in scope, regardless of the role bottom trawl surveys have played in the past to provide stock assessment data. Because of this, all NMFS Science Centers are actively engaged in developing new methods for sampling rock, reef and other untrawlable habitats with the objective of determining the effectiveness of initiating new stock assessment surveys.  Although diverse, all of these methods are non-extractive and based on acoustic and/or optical technologies. Shipboard acoustics with stereo camera ground-truthing are being tested by both the Alaska and Southwest Fisheries Science Centers; towed cameras by the Alaska, Southeast, and Northeast Fisheries Science Centers; tethered drop cameras by the Alaska Center; untethered drop cameras or landers by the Southeast and Pacific Islands Science Centers;  Remotely Operated Vehicles (ROV) by the Southwest and Pacific Islands Centers; Autonomous Underwater Vehicles (AUV) by the Pacific Islands and Northwest Centers; manned submersibles by the Southwest Center, and Lagrangian drifters by the Northwest Center. 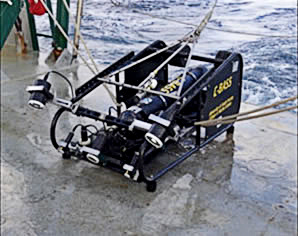 Recognizing the widespread demand for fishery-independent surveys in untrawlable habitats, the NMFS Office of Science and Technology (OST) has consistently funded development of these technologies through the Advanced Sampling Technology (AST) program, which until recently consisted primary of the Advanced Sampling Technology Working Group. However, 2 years ago, the OST initiated two additional groups within the AST program: the Automatic Image Analysis Strategic Initiative, focused on developing methods to automatically process optical data, and the Untrawlable Habitat Strategic Initiative, focused on improving the methodology used to survey fish populations in untrawlable habitat.  Unlike the AST working group, which operates through a competitive funding process, the two new groups were encouraged to utilize different approaches to project funding. The funding approach chosen by Untrawlable Habitat Strategic Initiative committee was to support multidisciplinary, collaborative, field experiments focused on issues that were wide spread among the NMFS Science Centers. 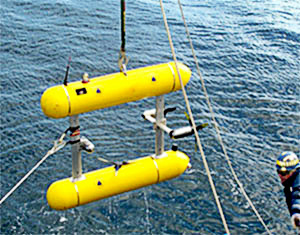 The first full-scale Untrawlable Habitat Strategic Initiative experiment was conducted 4-21 August 2014, on the chartered research vessel Pelican in an area of the northeastern Gulf of Mexico known as the Florida Middle Grounds. The Florida Middle Grounds is a soft coral and sponge reef system supporting snapper and grouper fisheries and is noted for its exceptionally clear water, which allows natural light photography.  The scientific party consisted of researchers from the Alaska Center, the Northwest Center’s Newport and Seattle labs, the Pacific Islands Center, the Southeast Center’s Pascagoula and Beaufort labs, Woods Hole Oceanographic Institute, South Florida University, and Florida International University, all of whom were grouped into teams focused on various aspects of the experiment.

The objectives of this experiment were to develop methods to: 1) detect and quantify fish movement in response to disturbance created by approaching optical sampling vehicles, 2) determine whether this movement changes the density of fish within the count path of the vehicles, 3) quantify any change in sampling efficiency resulting from this movement and 4) examine whether stereo optical data collected with benthic cameras can be combined with simultaneously collected shipboard acoustic data to produce a combined survey suitable for assessing the abundance of reef fish. 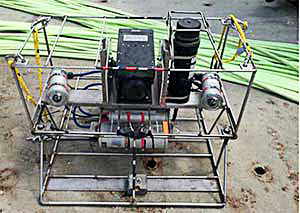 Figure 3. An observation pod consisting of 1) MOUSS stereo camera, 2) DIDSON sonar (black box) and 3) a Long Baseline Navigation beacon (upright black cylinder) to allow precise positioning and vehicle navigation. Observation pods were separated from each other by 50 m on the longline.

To achieve these objectives, the experiment was designed to observe and quantify various fish behaviors that occur in response to approaching optical sampling vehicles, especially those which lead to a change in the number of fish within the count path and produce a bias in the resulting estimates of fish density. To do this, an observational test bed consisting of both optical and acoustic sensors was set up on the sea floor to observe fish behavior; then optical sampling vehicles were navigated through the area sampled by the sensors.

Three moving optical sampling vehicles were tested: 1) a Phantom DH2 ROV, 2) a SeaBed AUV and 3) the CBASS towed camera vehicle (Fig. 1). All three systems are designed to count fish along a measured track-line, but differ considerably in their production of acoustic and visual stimuli that could trigger fish attraction or avoidance behavior. The test bed consisted of three observation pods attached at equally spaced intervals along a bottom longline that was tensioned during setting operations so that the pods were positioned in a straight line and pointed in the same direction (Fig. 2). Each of the pods contained a high-resolution, monochrome, natural-light, stereo camera (MOUSS camera) and a DIDSON high frequency sonar imaging system (Fig. 3), as well as, a Long Base Line navigation beacon to allow precise positioning of the pod.  Each morning of the experiment, the observation pods were set onto the reef, and then were allowed to remain undisturbed for at least 1 hour to allow fish to acclimatize to the pod’s presence and return to their undisturbed behavior. After the recovery period, one of the camera vehicles was repeatedly navigated as close to the observation pods as possible, allowing at least 15 minutes between passes to again allow fish to recover from the sampling disturbance. During all of the passes, each of the vehicles also recorded optical data using normal survey methodology.

The observation pods collected a huge volume of data, which is still being analyzed by the various research teams; however the types of analysis are as follows. One of the MOUSS camera teams, utilizing data from only a single lens, is estimating the relative abundance of each species within the field of view at equally spaced time intervals before and during each passage of a vehicle. This data will be used to test whether fish behavior changes the density of fish from the undisturbed state to the moment of sampling by the vehicle. A second MOUSS camera team is using the camera’s stereo capabilities to measure the three dimensional position of each fish at each instant, then tracking the movement of individual fish over time to estimate their movement vectors. These vectors, in turn, will be used to define the movement probability distributions of fish at various times preceding vehicle passage, to determine if fish move downward or laterally to avoid an approaching vehicle and to determine if the timing of this movement is consistent with vehicle detection triggered by either vision or acoustic stimuli. The DIDSON acoustic imaging team is also pursuing both approaches with their data, however, unlike the optical data, the acoustic data does not allow species identification with certainty.

In addition to the teams focused on the MOUSS and DIDSON data, other teams are focused on the ROV, AUV and CBASS optical data and are now engaged in identifying and counting the various species within the measured count paths. Assuming that the counts from the MOUSS cameras can be combined with the stereo distance measurements of each fish to produce density estimates during undisturbed times, then it will be possible to use the MOUSS estimates of undisturbed density to estimate the sampling efficiency of each species by each vehicle, or, in other words, to calibrate the vehicle density estimates.

Other kinds of observational data also were collected during the experiment, including four frequencies of split-beam acoustic data obtained with shipboard Simrad EK 60 sounders during the passes of the CBASS towed camera by the observation pods. Such data can be used for acoustic estimates of fish density, but only if there is some method to determine the species identity and sizes of the fish and the proportion that occur so close to the bottom that they cannot be acoustically observed by the downward looking echosounder  (called dead-zone loss). The acoustics team is investigating if the MOUSS camera observations can be used to provide this information. One unique feature of these observations is that they are made at the exact moment when the acoustic data is collected, and therefore lack the potential sampling bias associated with the usual method of collecting the optical ground-truth data after collecting shipboard acoustic data. In addition, any disturbance of the fish at the moment of sampling, such as diving or tilting, which can change fish target strength, is also measured. Data produced by the acoustic and MOUSS teams is being combined to investigate whether similar data now being collected by the NMFS annual Gulf of Mexico stereo bottom camera survey can be joined with the simultaneously collected acoustics data to produce a combined index of snapper and grouper abundances that is more precise than the current, camera-only, index.

Some of the preliminary observations from the fixed observation pods indicate that fish counts drop near the time of vehicle passage. For example, counts of fish before vehicle (CBASS) passage, as measured by the DIDSON, drop by about 80% just prior to vehicle passage and stay low throughout the subsequent passage and recovery periods. Although this is only one sampling event, the sustained low abundance suggests that a period longer that 15-20 minutes may be required for normal behavior to return and that the behaviors seen on repetitive passages may not be independent as was assumed in the original design of the experiment. However, from this and other evidence it is clear that many species strongly respond to the approach of the camera vehicle; now it must be determined if this response leads to a change in the abundance or detectability of the fish originally in the count path of the vehicle.