Updates From The Field: Monk Seal News from Across the Hawaiian Archipelago

In May 2015, NOAA Fisheries deployed 14 researchers, in teams of two to four people, to five of the six main areas in the Northwestern Hawaiian Islands (NWHI), which includes F 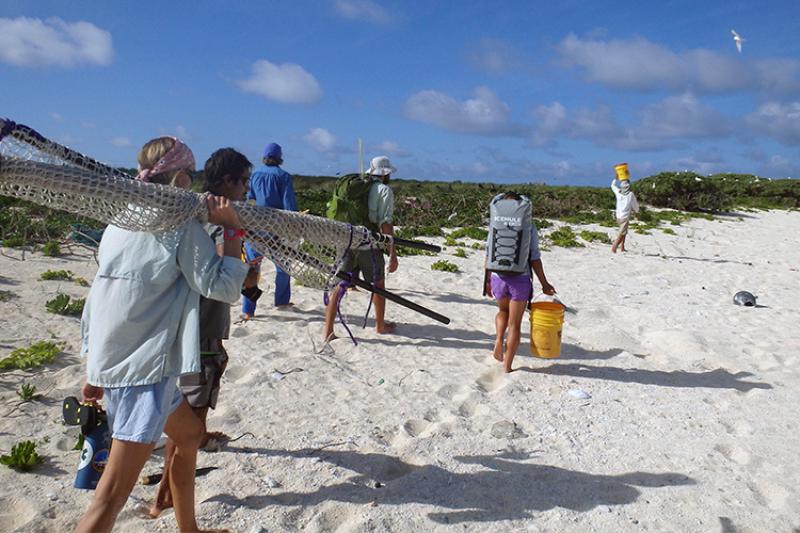 In May 2015, NOAA Fisheries deployed 14 researchers, in teams of two to four people, to five of the six main areas in the Northwestern Hawaiian Islands (NWHI), which includes French Frigate Shoals (FFS), Laysan and Lisianski Islands, Pearl and Hermes Reef, and Kure Atoll. These seal research teams have been monitoring the Hawaiian monk seal subpopulations, counting seals and intervening to help them when possible. Our U.S. Fish and Wildlife Service partners have also made additional opportunistic observations of Hawaiian monk seals at Midway Atoll. The field season is more than 50 percent complete, and already there are very encouraging reports. Here are a couple of highlights to note.

So far this year, 139 monk seal pups were born, the highest number of births in 4 years (13 percent higher than last year). Additionally, FFS — which historically has had the lowest survival of seal pups of weaning age to one–year old, due to Galapagos shark predation and limited monk seal prey — has a 74 percent yearling survival rate. This is the highest survival rate since 1999! Though shark predation still remains the largest source of mortality, food resources seem to have improved. El Niño years also have shown to be beneficial to monk seal survival, suggesting a continuation of these favorable trends (2015 is an El Niño year).

Field teams have also been able to conduct 23 seal survival-enhancing interventions, including disentangling seven seals, rescuing two seals from behind the deteriorating seawall at FFS's Tern Island, reuniting a nursing mother-pup pair, conducting a pup exchange between two nursing mothers, preventing an aggressive adult male from injuring or drowning a weaned pup, treating an abscessed seal, and translocating ten newly weaned pups from FFS to areas with less shark activity. Additionally, the two undersized, NWHI-born weaned pups that were rehabilitated at Ke Kai Ola, The Marine Mammal Center's monk seal hospital, over the winter were released as yearlings at Kure Atoll in March. They are now thriving back in the wild.

In 2014, 15 Hawaiian monk seal pups were born in the main Hawaiian Islands (MHI). So far this year, there have been a total of 12 births in the MHI – five births on Moloka'i, four on Kaua'i, and three on O'ahu. However, the pupping season continues through the end of the year, so more births are likely. Of significance is that four of these 2015 mothers pupped for the first time, and they all pupped on the same islands and beaches where they were born. In addition, one adult female who received lifesaving surgery to remove a monofilament line that damaged her tongue in 2012 gave birth to her second pup post-surgery, and 9th pup overall.

Most activities to enhance seal survival in the MHI focused on anthropogenic (manmade) threats. This year, NOAA Fisheries conducted eight survival-enhancing interventions to save seals from anthropogenic threats so far. Staff preemptively caught four seals and temporarily held them in captivity on O'ahu in response to a diesel oil spill in January; they released these seals several days later, once the threat had passed. NOAA Fisheries also removed fishing hooks from three seals and dewormed (with medication) one immature seal in poor body condition to improve its ability to extract nutrition from prey.