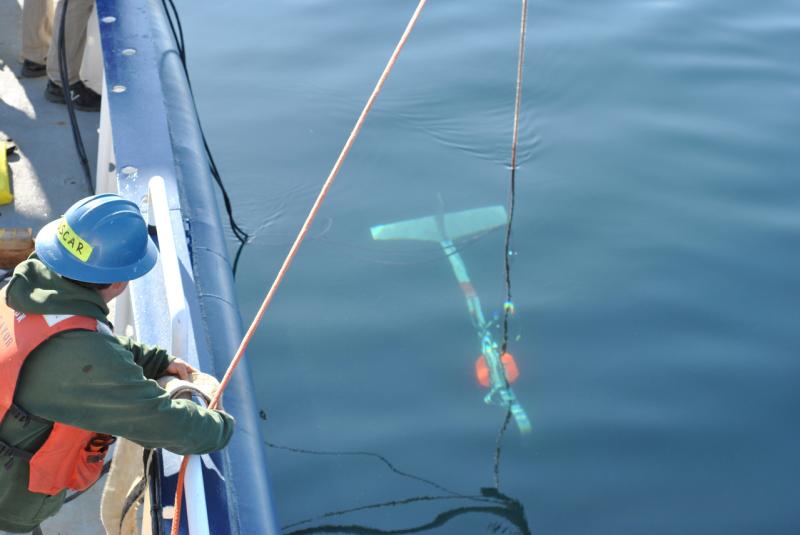 NOAA and University of Rhode Island scientists conducting a research cruise off the coast of Massachusetts and Rhode Island are inviting students and the general public to learn about their research on whales and their environment through live interactive broadcasts from the ship at sea.

Christopher Orphanides, a  research zoologist in the Protected Species Branch at the Northeast Fisheries Science Center’s Narragansett Laboratory, is chief scientist of the research expedition April 3-8 aboard the RV Endeavor, operated by the University of Rhode Island. He and other NEFSC and URI colleagues will deploy a variety of instruments to listen for whales and collect plankton samples. Additional oceanographic data will be gathered to study how environmental conditions relate to the presence of whales and their prey.

“There will be a lot going on during this cruise, and it is exciting for me as a first time chief scientist,” said Orphanides, who has worked at the NOAA Fisheries Laboratory on URI’s Bay Campus since 2001. “Not only are we collecting a variety of data from a number of instruments, we have college students aboard participating fully in the work, and we will be sharing what is happening at sea live though questions from students and the public ashore.”

Two potential research locations are planned, depending on sea state and recent whale sightings. The primary area is just south of Martha’s Vineyard, an area where right whales have recently been found to occupy throughout the year. The secondary location is further offshore along the continental shelf break, where marine mammal research has been focused given potential energy development in the area. The NEFSC’s marine mammal aerial survey team is providing sighting information on marine mammals in the area.

Eight undergraduate students will be aboard the ship participating in the data collection as part of CSI Oceans, a URI undergraduate honors science course.  Karen Wishner, a professor of oceanography, leads the course along with Orphanides, who is also a URI graduate student working on his doctorate in biological oceanography. He has received support for his studies from NOAA’s Advanced Study Program.

The Inner Space Center at URI's Graduate School of Oceanography will broadcast live from the Endeavor to Facebook on the evenings of April 5 and 6 at 7 p.m. EDT and April 7 at 6 p.m. EDT, and during a community event April 5 at 7 p.m. EDT at URI's White Hall Auditorium. The RI Endeavor Program is also supporting this cruise.

“This cruise could be particularly timely due to a number of recent events,” said Orphanides. “The increase in right whale mortalities and the shifting distribution of right whales along the East Coast, proposals to expand offshore energy development, and the potential for climate change to alter oceanic habitats and distributions of living marine resources make the data we collect important to management and conservation decisions.”

The live, interactive broadcasts will feature discussions with the students about the science being conducted, its importance, and their experiences at sea. These events will be broadcast back to schools in Rhode Island, where question and answer sessions will occur, and will also be available online to the general public. The broadcasts will run about 25 minutes each.