Decline resembles drop 20 years ago, which was followed by an increase. 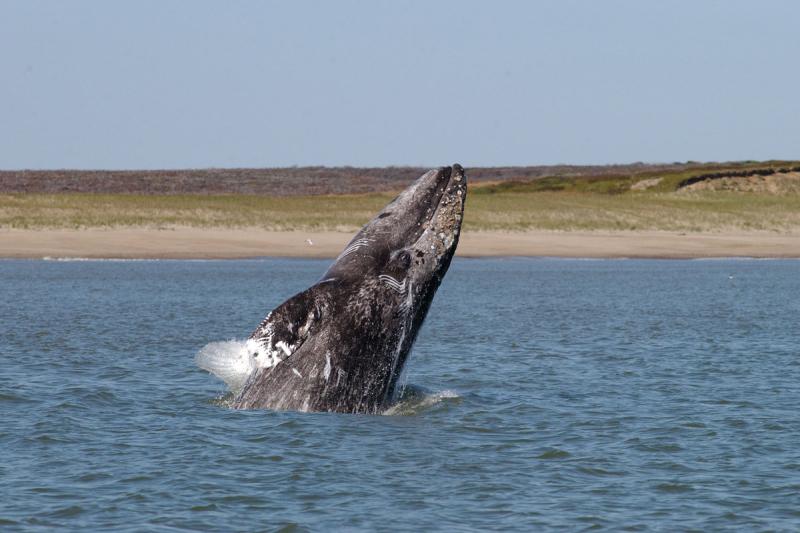 A new estimate shows that the gray whale population that migrates along the West Coast of North America has declined in number about 24 percent since 2016. Photo by Dave Weller/NOAA Fisheries

The population of gray whales that migrate along the West Coast has declined about 24 percent since 2016. It now stands at an estimated 20,580 whales, a new population assessment (PDF, 7 pages) has found. That is similar to previous fluctuations in the Eastern North Pacific population that has long since recovered from the days of whaling.

The decline coincides with an ongoing Unusual Mortality Event that NOAA Fisheries declared in 2019 for gray whales when strandings increased on the West Coast. It resembles a similar 23 percent decline documented after an unusual mortality event 20 years earlier, in 1999 and 2000. The gray whale population rebounded following that previous UME to greater numbers than before.

The continuing change in gray whale numbers “suggests that large-scale fluctuations of this nature are not rare,” scientists wrote in a NOAA Fisheries Technical Memorandum that reports the new estimate. “The observed declines in abundance appear to represent short-term events that have not resulted in any detectable longer-term impacts on the population.”

NOAA Fisheries teams counted gray whales migrating south from their Arctic feeding grounds last year as they passed a research station on the California Coast. The count is part of gray whale surveys that the Southwest Fisheries Science Center conducts on a regular basis, with two surveys in every five-year period.

The last survey estimated the population at 26,960 in 2016. Scientists said the 24 percent decline to 20,580 is not surprising after about two years of elevated gray whale strandings.

“We knew the population would be affected, and this helps us understand the scale of the changes,” said research biologist Dave Weller, Director of the Marine Mammal and Turtle Division at the science center. “We have seen this kind of variability in the past.”

He said that, pending COVID-19 restrictions, researchers would continue the gray whale surveys that also include counts of northbound gray whales later in the year. Gray whales are considered a sentinel species that reflect the health of their environment. The eastern North Pacific population of gray whales was determined to be fully recovered and were removed from endangered status in 1994.

During the UME, the West Coast Marine Mammal Stranding Network counted 122 gray whale strandings in 2019 in the United States, including Alaska. They counted 79 in 2020. That is higher than the annual average stranding of roughly 29 gray whales over the previous 18 years. Strandings were also elevated in Mexico and Canada. Estimates indicate that strandings represent about 4 to 13 percent of whales deaths because most do not end up where they can be found and examined.

Several of the stranded gray whales appeared thin and malnourished, according to an analysis of those that stranded in 2019. The investigation of the UME is evaluating ecosystem changes that may be impacting gray whale habitat and food supply. It is also evaluating impacts from harmful algal blooms, infectious disease, natural predation, and human interactions.