With a little “kelp” from the non-profit GreenWave, our scientists found no microorganisms that pose food safety concerns on aquacultured sugar kelp during the growing season in Long Island Sound. 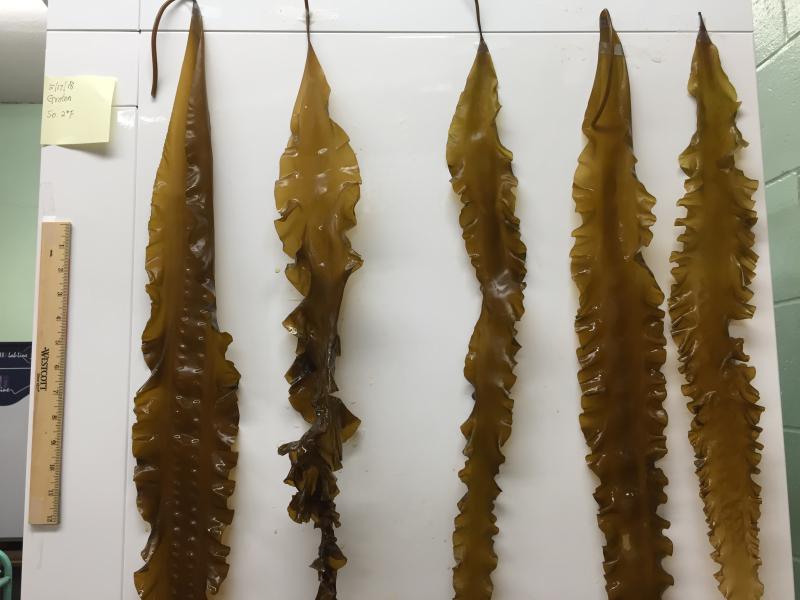 A team from our Milford Lab has published the first comprehensive list of what grew on kelp throughout a growing season at one farm in Connecticut.

“We did not find any microorganisms on kelp that are food safety concerns, and detected minimal presence of species that could affect product quality, which is good news for the industry,” said lead biologist Yuan Liu.

The blades of sugar kelp underwater resemble undulating lasagna noodles. This cold-water brown algal species is a nutritious “superfood” prepared by creative chefs and available seasonally at farm-to-table restaurants. The native sea vegetable is also found in food additives, medicine, cosmetics, fertilizer, and animal feed. Environmentalists tout kelp as a climate solution because it soaks up excess nutrients and planet-warming carbon dioxide as it grows.

The researchers used both culture-dependent and culture-independent techniques, including microscopy and next-generation sequencing of microbial DNA. They also used a statistical analysis called indicator species analysis. They cataloged what they found attached to the kelp blades including:

They worked with the New Haven-based ocean farming non-profit GreenWave, which provided biweekly kelp and seawater samples throughout a growing season in Long Island Sound. GreenWave trains regenerative ocean farmers, including kelp growers. Regenerative aquaculture operations are developed to support, and potentially improve, the environmental conditions in which they are located.

Seaweed farming is the fastest-growing form of aquaculture in the United States and supports a $6 billion industry worldwide. Long cultured in Asia, sugar kelp has become trendy in the United States. There are now at least 120 permitted farms in New England, the majority of which are in Maine. Kelp is a winter crop that some fishermen and shellfish farmers grow to diversify their income in the offseason.

Despite kelp’s benefits and growing popularity, the industry faces headwinds. In addition to a short shelf life and few processing facilities, growers and scientists are just beginning to learn what grows on kelp blades. As a result, there is currently no national food safety standard for U.S.-produced seaweed; regulations vary by state.

To farm kelp, strings are usually seeded with kelp spores in a hatchery. When the blades are attached to the string, they are transplanted and grow to maturity in the ocean on longlines. Microorganisms growing on the blades could potentially compromise food safety or product quality during grow-out. Removing encrusting animals and plants increases the cost of preparing kelp for the market.

While collecting kelp samples from longlines set in Groton, Connecticut, GreenWave’s Kendall Barbery noticed snails, lacy bryozoans, and hydroids on the blades. “What I knew was what I could see with my own eyes,” she explained. “Working with the Milford Lab helped us understand what we can’t see in the water and on the surface of the kelp.”

She noted that collecting samples equipped with only a cooler with an ice pack was relatively easy, as long as the weather cooperated. It was a welcome opportunity to observe the farm more closely.

“Regulators in Connecticut use a precautionary approach and are doing their best, following the example and practices of the shellfish industry,” Barbery said. “It is not apples-to-apples because kelp are algae rather than animals and don’t filter feed like shellfish. Based on this study we have not seen any threats to human health, but more research is needed to better understand risks.”

Barbery spent 10 years as a deckhand in Alaska fisheries before learning how to cultivate shellfish and seaweed as an apprentice to Bren Smith, who co-founded GreenWave. Barbery was one of the organization's first employees, and as it has expanded, so has her role. Today she is GreenWave’s director of Partnerships and Program Development.

Combining high-throughput DNA sequencing and indicator species analysis, our scientists compared the organisms growing on kelp to the organisms in the surrounding seawater.  High-throughput DNA sequencing is a rapid and cost effective way to find out what organisms are present in the environment. Scientists use indicator species analysis to estimate an organism's association with a particular group they are interested in (in this case, blade and seawater groups). This allowed them to identify species that grew better on kelp and screen for potential pathogens.

The Milford team looked for human pathogens of concern. They used selective culture techniques to screen for pathogenic strains of Vibrio bacteria that can make people sick, but they did not find any during the study.

They did find some microbes growing well on the kelp that could potentially affect product quality, including water molds and a strain of the bacterium Aquimarina. Both have caused damage and commercial loss of nori seaweed in Asia. Nori is best known as the seaweed used to wrap sushi rolls. Although there were no signs of product quality compromise in the field, more lab research may shed light on whether these species are detrimental to sugar kelp at higher abundance.

“Characterizing the microbial community on kelp is an important application of eDNA metabarcoding. Using next-generation sequencing, basically high-throughput DNA sequencing, we can identify both microbes and macroorganisms through their DNA sequences,” said Liu. “For example, we found that ciliates are important micro-grazers. They prevent biofouling by persistently grazing, cleaning the blades.”

“Sugar kelp is a new aquacultured species in southern New England, and information on what’s growing on it is critically important to managers,” research ecologist Judy Yaqin Li explained. “Liu’s expertise on the microbial community was key to this project.”

Li spent her career studying the interaction between aquaculture and the environment. Although this project was her first experience studying sugar kelp specifically, Li is no stranger to seaweed. “Kelp is familiar to me,” she said, “I had it growing up. It’s good in soups and stir fries!”

Li notes that they found no concerns for human consumption during the study, but what grows on kelp may be specific to the location and season. “The study ended in May with the growing season,” she explained, “but if you extended it into the summer, the results may be different.”

Sharing the Findings with Growers and Regulators

GreenWave plans to share these findings with the kelp growing community through their training and Regenerative Ocean Farming Hub. They could help improve product standards and inform the development of automated cleaning and processing. Kelp growers and regulators alike can use this comprehensive list to know what to look for when monitoring. The research team hopes to inspire more research to support industry-wide best practices. 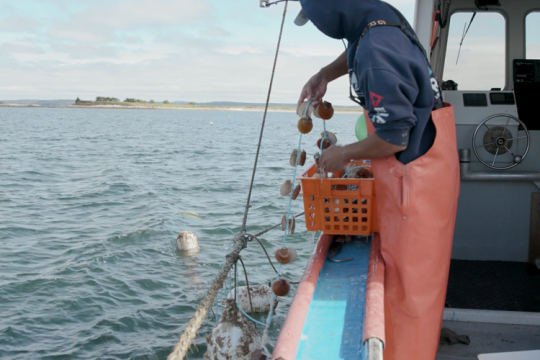