What Happened to the Pollock Born in 2015?

New study sheds light on myriad factors that likely contributed to low survival rate of fish born during a Blob year in the Gulf of Alaska.

In 2015, NOAA Fisheries scientists saw the lowest number of pollock larvae in the 30-year history of their Gulf of Alaska spring survey. They also observed the lowest number of juveniles in their late-summer survey, which has occurred since 2000. The low abundance in both surveys coincided with a marine heatwave of record ocean temperatures. Scientist Lauren Rogers and colleagues attribute the absence of larval and juvenile fish to environmental conditions that were not ideal for pollock growth and development during the heatwave.

“Marine ecosystems are complex with lots of connections,” said Rogers. “When you are trying to identify what might be behind a decline in abundance of fish at a particular age, it is often a series of factors that are at play.”

That is exactly what scientists found when looking at young pollock survival in 2015. Their survival was affected by:

In the Gulf of Alaska, pollock comprise a significant portion of fish abundance. Pollock plays a key role both as predator and prey, and supports a $100 million commercial fishery. The number of young pollock that survive to become adults is highly variable each year, as with most young fish in the marine environment.

Shelikof Strait is the primary spawning ground for the Gulf of Alaska stock, and mature individuals aggregate there in March and April to spawn.

Eggs incubate at depths of more than 150 meters for about 2 weeks. Then, they hatch and rise to the upper 50 meter of the water column as larvae.

Larvae are subjected to the rapid drift of the Alaska Coastal Current to the southwest along the Alaska Peninsula. They begin feeding about 5-6 days after hatching. Their diet consists primarily of the eggs and larvae (“nauplii”) of small crustaceans known as copepods.

Juveniles occupy midwater habitats from the nearshore to the shelf edge, with high densities in the Semidi Bank area downstream of the Shelikof spawning area. From mid- to late- summer, juveniles shift from a diet consisting primarily of copepods (especially Calanus marshallae) to one dominated by euphausiids (also known as krill).

To understand how the marine heatwave affected pollock, Rogers and her colleagues used oceanographic and biological data collected from years of research surveys. Together with computer models and satellite-derived estimates of phytoplankton, they analyzed three life stages: eggs in early spring, larvae in late spring, and age-0 juveniles in late summer.

They used a model of egg buoyancy to investigate how hydrographic conditions affected the vertical position of eggs in the water column and potential mortality.

In their analysis, they considered the timing of the spring phytoplankton bloom and the availability of zooplankton prey for larvae and juveniles. They also explored how warmer temperatures and reduced prey quality affected the body condition and consumption demands of juvenile fish prior to their first winter.

Factors Behind the Unprecedented Low Numbers of Young Pollock

During the marine heatwave, scientists observed persistent warming throughout the Gulf of Alaska. The warm water occurred throughout the water column, extending from the surface down to 300 meters. Seabird die-offs were observed. The adult population of Pacific cod experienced a significant decline, leading to a severe reduction in catch limits.

In this study, scientists found evidence that the marine heatwave also affected young pollock survival in 2015. The effects were in multiple areas and occurred at multiple stages of development.

First, the salinity in Shelikof Strait, where many pollock spawn, was unusually low. Using a model of egg buoyancy, scientists determined that the lower salinity could have caused the eggs to sink to the seafloor part way through their development. This could explain the apparent increased mortality if the near-bottom habitat is less favorable for survival of the normally pelagic eggs.

Second, the available data on zooplankton nauplii in spring, which are the main food items for first-feeding larval pollock, suggest low densities in many places.

Finally, scientists looked at the general health or condition of juvenile pollock at the end of summer using a bioenergetics model. They found that the warmer temperatures, together with reduced quality of the prey, increased the amount of food required for consumption by nearly 20 percent compared to an average year.

This means that a fish would need to eat 20 percent more food just to maintain the same growth as in an average year. At the same time, evidence suggests that available prey was lower than average. As a result, young fish were in poor condition as they entered into their first winter.

According to Rogers, this also fits into the story of how things played out more broadly in the Gulf.  Warmer temperatures increased metabolic demands of predatory fishes like arrowtooth and older pollock. Young pollock are prey for these larger fishes.

“Predation pressure must have gone through the roof. The extraordinarily large 2012 year class of pollock was also maturing at this time, and could have preyed upon the younger fish and eggs.”

By studying ecological and biological responses to the warm anomaly, scientists can learn more about  how climate conditions alter ecosystem processes and functioning. Scientists may also be able to look at young fish survival rates during this time to better estimate future abundance of commercially valuable species like pollock.

Information generated through this research has already been used to help inform management decisions. Specifically, the number of pollock born in 2015 (2015 year class) is the lowest on record. While it is not unusual to see variability in how many pollock are born each year, the lack of new recruits from Blob years (especially 2014 and 2015) contributed to very low age diversity in the stock in recent years. This low age diversity and lack of recruitment was cause for substantially increased concern regarding stock productivity. As a result, the scientist who annually evaluates the stock condition recommended a reduced total catch rate (Acceptable Biological Catches) in 2018. 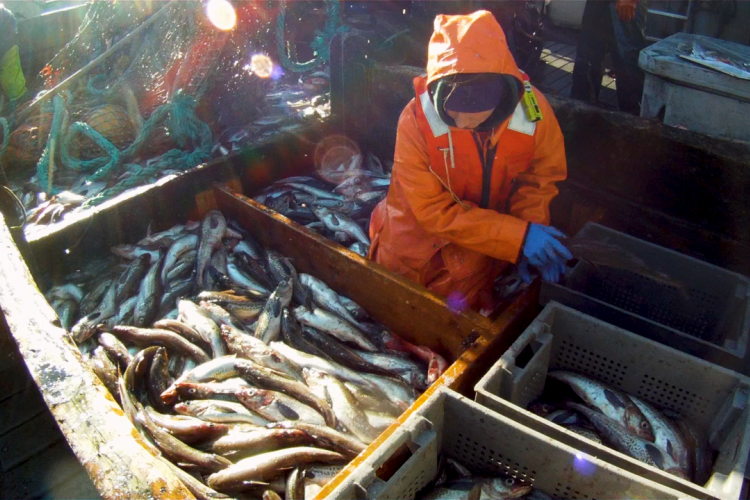