During March (Women’s History Month), the Northeast Fisheries Science Center asks five women scientists to share a little about their science journey, what hurdles or obstacles they’ve experienced, how they overcame them, and what advice they might have for the next generation of women scientists. Featured this week is Holly McBride, an IT Specialist in our Data Management division. 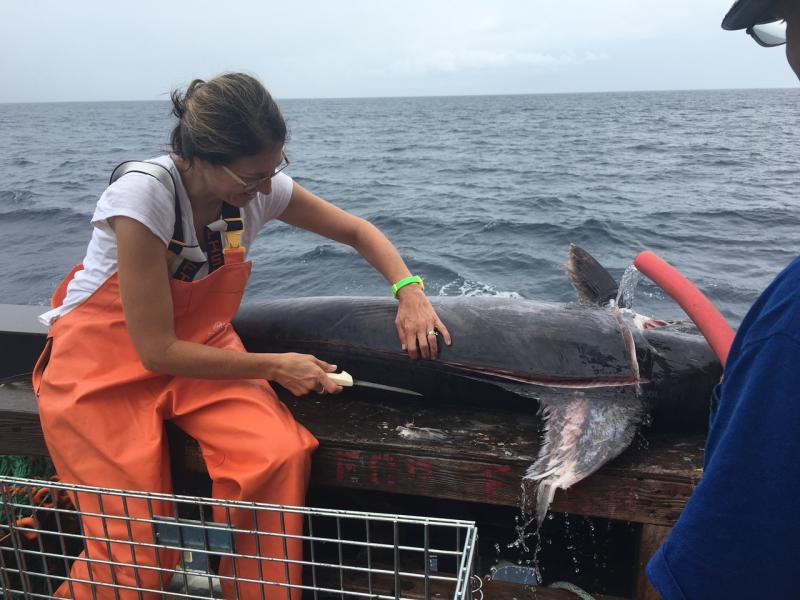 Both of my grandparents worked for NOAA, my grandmother in the payroll department for NOAA Corps and my grandfather a cartographer and Division Chief of the NOAA Aeronautical Chart Division. His Department of Commerce silver medal hangs in my office. When I was very young, I would visit my grandfather at work where the “National Aquarium” was in the first floor of the Department of Commerce building in D.C. Then when my grandparents retired to Florida, I spent a lot of time with them at Mote Marine Laboratory and Aquarium and discovering marine life along the Gulf Coast - that’s when and where I knew I wanted to do something in marine science. I feel very fortunate to be able to carry on with the family legacy working for NOAA.

I studied marine biology at Roger Williams University in Rhode Island, where I spent my sophomore and senior winter terms studying in Jamaica. The first year I studied  tropical invertebrates and the second I studied mangrove ecosystems. After graduation I took a job as a high-seas observer for NOAA in the California drift gillnet and Hawaii longline fisheries. This experience gave me the opportunity to really immerse myself in the fisheries science world and get my sea legs; it was a turning point in my career that really made me want to focus on fisheries. I learned a lot about fisheries science working alongside commercial fishers and collecting fishing effort and biological data that included fishing gear and effort information, bycatch, fish lengths and otoliths for NOAA Fisheries.

After two seasons of observing, I came back to the East Coast to work for the Massachusetts Division of Marine Fisheries (DMF) their Conservation Engineering Project. As a technician, I worked on bycatch reduction in the whiting (silver hake) fishery and selectivity in the longline fishery. After leaving Mass DMF and working on a grant-funded project, I volunteered for the Science Center’s scallop survey aboard the NOAA Ship Albatross IV.  Working on the scallop survey made me realize that I wanted work at the Science Center and really launch my fisheries career. I was hired as a biological technician and spent the next three years working in the Ecosystems Survey Branch, going to sea and auditing data. At this time the Science Center invested resources to transition from collecting data recorded on paper to collecting it electronically—and that’s when my love for fisheries technology was born. Through NOAA and our Science Center training opportunities, I was able to move into my current position as an information technology specialist working on the technical side of fisheries data collection.

I had a challenging first year of college. At the time, there were huge gender gaps in many of my science and math classes (most were men). I was afraid of failure and lacked the confidence to be successful in difficult math and science classes, I was questioning if I would continue with marine science. During a school break that year, a friend of mine invited me to a talk given by a female chief engineer at Bechtel Corporation, a large engineering company in Virginia. Her message was don’t be afraid of failure, don’t let the failure direct your future, and don’t be afraid of failing the class and having to retake it. I took that advice to heart, and went back to school fully committed and immersed myself in learning. I try to instill this message to my daughters and apply it at every challenge at work.

Tell us about a time in your career when you or your mentor, colleague, or coworker supported you or other women scientists by recognizing, nominating, or rewarding them, or was a champion of change and an ally, or amplified the voices of women when they weren’t being heard.

In 1972, my father, along with the high school he worked for, supported a successful  Title IX  case against the Maryland Supreme Court to allow the first woman to run on a high school cross country team. The woman ran with the team until contested by another school during a meet. My dad would say, “She showed up for tryouts. Why shouldn’t she be on the team.” The thought never crossed his mind that a woman couldn’t be on the team. I was raised not ever thinking about a gender bias or difference and I’ve been fortunate to spend my life surrounded by strong family mentors, both men and woman.

Throughout my academic and professional career I’ve had the support of many people and I’ve had the opportunity to give support back to the scientific community. Until this question, I’ve never thought about that support being influenced by gender or sex, but instead by the most qualified person.

I’m not suggesting that there aren’t gender gaps and discrimination based on gender — especially in STEM fields, I’m simply saying that I support others based on their merits. Supporting and rewarding women scientists hasn’t been difficult for me because I’ve had the great fortune to be surrounded by amazing, talented, and accomplished women in my career.

Learn how and when to make the most out of every opportunity you decide to take and be sure to make opportunities where and when you can. What you take from an experience that you don’t like is just as important as what you take from experience that you do you like. You never know where those experiences will lead you. I started out as a biological scientist and ended up as a computer scientist, the part I love the most about my job is being able to marry the sciences together.