Meet Michele Sims, a vet to the Woods Hole Aquarium, and learn more about her work with turtles. 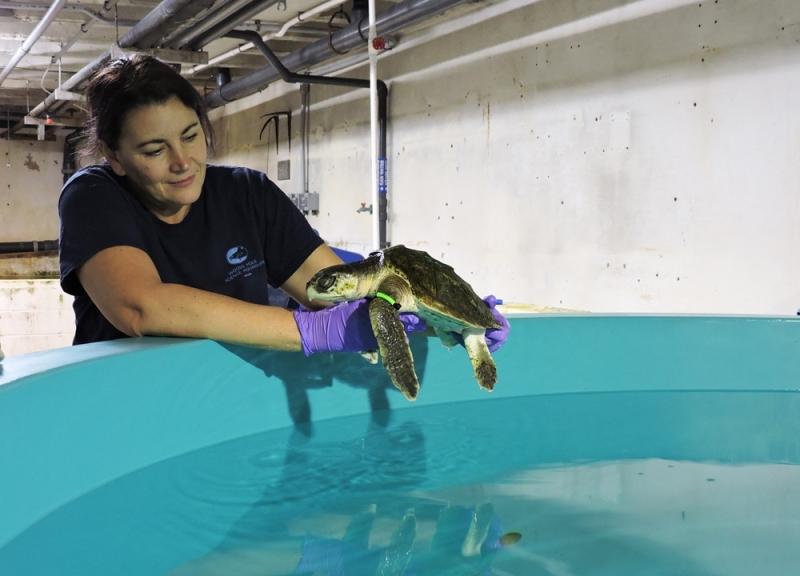 At the Northeast Fisheries Science Center we are actively involved in research to better understanding the biology and ecology of sea turtles that visit our region. Our Science Aquarium in Woods Hole is one of a handful of facilities equipped to treat cold-stunned and stranded sea turtles after they’re triaged by the New England Aquarium. We received 12 after the mass stranding on Cape Cod last fall.

To celebrate Sea Turtle Week and the Science Aquarium’s sea turtle conservation efforts, we talked with our veterinarian Dr. Michele Sims (D.V.M., L.M.T.) to learn about her career, how she came to be the Science Aquarium vet, and her experience treating last fall’s cold-stunned sea turtles.

What drew you to a veterinary career?

All the way back to when I was a kid I wanted to be in veterinary medicine. That actually fell by the wayside when I got interested in computers. I got a bachelor’s degree in computer science and worked as a network engineer for about 10 years. At some point I realized I wanted to be working with live systems. I started taking classes in biology and chemistry and then I got hooked into zoology and evolution. When I realized I had to pick one species to work with, I decided that veterinary medicine might be a good way to work in science and conservation and still be able to work with more than one species.

How did you do it?

It wasn’t easy. I was in the University of Hawaii’s zoology program pursuing another bachelor’s degree at the time I made the decision to apply to vet school. I was studying population health of a species of octopus in Hawaii, and I was also working in a genetics lab looking at diseases of insects. All of these things were interesting to me and it was hard for me to pick one path. Veterinary medicine seemed like the way to connect everything – to feed my scientific mind, my interests in evolution, conservation, infectious disease, and parasitology.

I knew when I applied to vet school that I didn’t want to take the traditional route and go into small animal practice, which primarily works with cats and dogs. I knew I wanted to stay in the conservation field so I was very specific about that in my applications. I knew pretty quickly who did and didn’t want someone like that – it really helped narrow things down.

When I interviewed at Tufts University I happened to be interviewed by the director of wildlife medicine, which was great for me and my interests in conservation. Tufts provides a well-rounded introduction to many aspects of veterinary medicine and surgery. Within their program there are opportunities to make your own path. They have required electives you can take within the program, as well as additional electives outside the program. I took every bird, reptile, aquatic, and zoo elective I could find. I also had the opportunity to go to South Africa to take a wildlife medicine course, and to Florida to take an aquatic animal medicine course hosted by Mote Marine Lab.

Right out of vet school I started out working with Ian Nisbit on a post-oil-spill health assessment study in Buzzards Bay, Massachusetts. I was working with common terns, looking for evidence of oil exposure and taking blood samples to compare with those collected prior to the oil spill. After that, I completed a sea turtle internship with Wildlife Trusts looking at bycatch sea turtle health in Peconic Bay in Long Island, New York. After that, I worked one year in small animal practice, then at the Cape Wildlife Center. I’ve worked part-time for the National Marine Life Center, the New England Aquarium, the University of New England’s Marine Animal Rescue Center, the Buttonwood Park Zoo for seven years, and of course here at the Woods Hole Science Aquarium for about 10 years now.

I’ve been working with cold-stunned sea turtles since 2006. Rehabilitation of individual animals with the intent of releasing them back to the wild is where I get to combine my passions of conservation and medicine. It’s important to me that we get them out there so they have a chance to contribute to the overall health of the population.

How do you treat cold-stunned sea turtles?

When cold-stunned sea turtles are reported, they’re initially triaged, warmed, and treated at New England Aquarium. Some may be transported to other facilities for continued care. When they come in, they are hypothermic, dehydrated, and often suffer from pneumonia and frostbite-like injuries. Sometimes they come in with trauma from floating and washing ashore.

When we receive sea turtles, we run a series of rehabilitation diagnostics, including bloodwork and radiographs to monitor organ function and assess for signs of infection. If they have injuries and infections, we’ll include fluids to correct hydration and electrolyte imbalances, treat them with antibiotics, and make sure there’s a solid nutrition plan in place. Once they’re stable – swimming, eating, behaviorally normal – we try to get them released as quickly as we can. When they appear healthy enough for release, they’re often transported south to warmer waters if temperatures are too cold here. Ideally, we want to release them in water temperatures that are 70ºF or above.

Currently three of the twelve stranded sea turtles remain in your care. How are they doing and how does their future look?

One is being treated for an infection that is resistant to the initial antibiotics he was on, one had initial traumatic injuries that have taken time to heal, and the third has a bony lesion in the elbow which is being monitored. They’re swimming and eating well, so behaviorally you’d say they’re good to go, but we don’t want to release them too early. Yes, they swim great in the pool, but when they’re released back into the wild they need to be able to swim the marathon of their lives. My hope for these three is that we can release them locally. Water temperatures off Cape Cod should be warm enough in August.

In addition to cold stunning here in New England, sea turtles face other threats throughout the world. Marine debris ingestion, entanglement, light pollution, and loss of nesting habitat are all serious threats to their survival and success. Sea turtles don’t randomly nest; they go back to the same place every year. So if that place no longer exists, females can’t lay their eggs and you lose that portion of the population. Kemp’s ridley sea turtles are critically endangered. Most of our cold stuns are juveniles which won’t reach breeding age for another 5 to 10 years. They have a lot to go through before they even get a chance to contribute their genes to the population.

The last thing I’d like to share is that I love working here. I love working with all the different species of animals we have at the Science Aquarium. I love that we’re both educating people about conservation and contributing to NOAA Fisheries’ conservation efforts. I think it’s awesome that we’re the oldest aquarium in the country and that you can visit the aquarium without paying anything at the door. What’s not to like about any of that?