U.S. shark fishermen work under some of the most robust environmental standards in the world. Our science-based management has made significant progress toward ending overfishing and rebuilding the stocks of Atlantic sharks.

Are all Atlantic sharks endangered?

None of the 43 Atlantic shark species managed by NOAA Fisheries are classified as endangered in U.S. waters under the Endangered Species Act. Two of these 43—the scalloped hammerhead population in the Caribbean and off the coast of South America and the oceanic whitetip globally—are classified as threatened. That means they are considered at risk of being listed as endangered in the foreseeable future.

The U.S. Atlantic Ocean actually has some of the best-managed and sustainable shark fisheries in the world. As of 2018, six species were overfished, meaning the population has fallen below a minimum threshold set by scientists. A total of four species are also being fished faster than the populations can replace themselves.

We manage all of these species to end overfishing and rebuild populations. This is consistent with the Magnuson-Stevens Fishery Conservation and Management Act, the foundation of all domestic fisheries regulations.

Seven shark species or species complexes are neither overfished nor subject to overfishing:

What happens when a shark is listed as endangered?

The listing of a shark or any other species as endangered under the Endangered Species Act makes it illegal to harass, harm, pursue, hang, shoot, wound, kill, trap, capture, or collect the species. Attempting any of these things is also illegal.

In addition to enforcing this ban, we take the following management actions for all species listed as either endangered or threatened under the Endangered Species Act:

Learn more about the requirements of the Endangered Species Act

What about species listed as endangered or threatened by other organizations?

One commonly cited list for sharks is the International Union for Conservation of Nature’s Red List of Threatened Species. NOAA scientists participate in the species assessment for the Red List, but we do not base our management actions on IUCN designations. They use different criteria to determine the status of a species than we use under the Endangered Species Act or Magnuson-Stevens Fishery Conservation and Management Act.

The United States does, however, make management decisions based on classifications made by the Convention on International Trade in Endangered Species of Wild Fauna and Flora, also known as CITES. The goal of CITES is to ensure that international trade of wild animals and plants does not threaten their survival. Instead of designating a species as threatened or endangered, CITES classifies species based on the level of trade monitoring needed to ensure the population recovers or remains healthy.

The United States has agreed to increase protections and international trade monitoring for 12 shark species, including basking, porbeagle, and hammerhead sharks.

Can fishermen catch any Atlantic shark?

No. There are 19 species of Atlantic shark that U.S. commercial fishermen cannot possess or retain in any form:

Fishermen must release any prohibited shark immediately, without removing it from the water and in a manner that maximizes its chances of survival.

There are also several species—including sandbar, silky, and porbeagle sharks—that can only be kept in limited circumstances.

How do you decide which sharks can be caught?

Our management decisions—including the decision to prohibit fishermen from catching a species—are based on scientific information on population size and vulnerability.

Our scientists also conduct research in areas such as shark biology, population dynamics, movements and migration, habitat use, and bycatch reduction.

The vast majority are not. In fact, 94 percent of all U.S. Atlantic shark landings in 2018 were from six species that are neither overfished nor subject to overfishing, The majority of these landings are from Atlantic spiny dogfish. 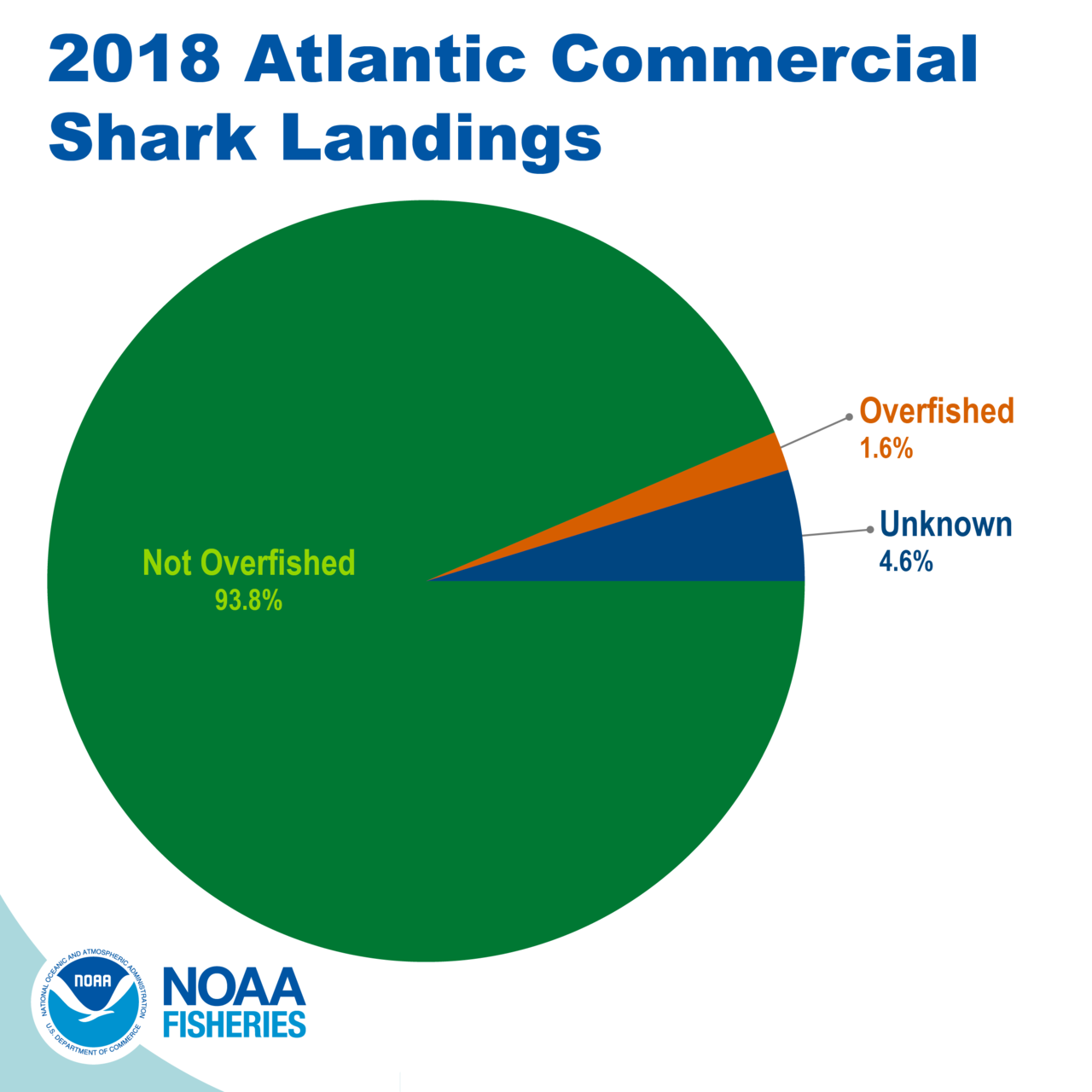 Breakdown of the stock status of Atlantic sharks harvested in 2018.

For those species that are overfished, NOAA Fisheries manages a rebuilding plan with strict catch limits based on the best available science. These limits are closely monitored and enforced.

Regardless of their stock status, all U.S. shark fisheries are managed sustainably under federal laws and international agreements.

How do you make sure fishermen don’t catch too many sharks?

U.S. shark fishermen work under some of the most robust environmental standards in the world. We use a range of science-based tools to effectively manage our fisheries:

Our management approach also provides some flexibility so we can make day-to-day adjustments. These changes are based on the required reports we receive from commercial fishermen and fish dealers every time they catch or purchase a shark. These reports allow us to open or close commercial fishing seasons throughout the year. Information from commercial fishermen and dealers—along with reports from anglers and other species information and data on the amount of time and gear spent fishing—are also used in the stock assessments that drive management changes in the long term.

What if a shark is caught unintentionally?

Some permits allow fishermen to keep a limited number of non-prohibited sharks caught while fishing for something else. All prohibited species must be released immediately, and fishermen are encouraged to release any shark they cannot easily identify.

No. U.S. Atlantic fishermen have been banned from shark finning—the practice of removing only the fins and dumping the rest of the shark’s body at sea—since 1993. The Shark Finning Prohibition Act of 2000 and Shark Conservation Act of 2010 further prohibits any vessel in the U.S. Exclusive Economic Zone from shark finning. All sharks, with the exception of smooth dogfish under certain circumstances, must be brought to shore with their fins naturally attached.

It is also illegal to have a fin aboard a fishing vessel unless it is naturally attached.

Learn more about the Shark Conservation Act of 2010

Yes. Several Atlantic shark species have experienced population growth as a result of our science-based management, including:

What are you doing to support international shark conservation?

The United States is a leader in promoting the global conservation and management of sharks. We:

Learn more about our international engagement