There is a unique association between tuna and dolphins in the eastern tropical Pacific Ocean. Learn more about dolphin-safe tuna. 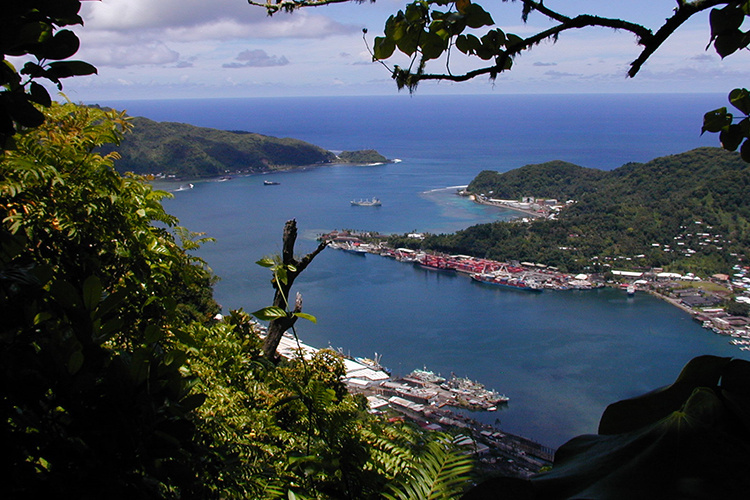 Photo: View of the harbor at Pago Pago, American Samoa. The StarKist Samoa tuna canning facility is shown at the lower edge of the harbor. Credit: NOAA Fisheries

What does dolphin-safe mean?

The Dolphin Protection Consumer Information Act describes the conditions in which tuna product may be labeled dolphin-safe in the United States. NOAA has implemented the Act by regulation, which among other things includes more specific documentary requirements. The regulations are codified at part 216, subpart H (Dolphin-Safe Tuna Labeling) of Title 50 of the Code of Federal Regulations.

Where and why are dolphins caught?

In portions of the eastern tropical Pacific Ocean, large yellowfin tuna swim together with several species of dolphins. This ecological association of tuna and dolphins is not clearly understood. During "porpoise fishing" (the fishermen's term), schools of tuna are located by first spotting the dolphins or the seabird flocks which are also associated with the fish. Speedboats are used to chase down the dolphins, herd them into a tight group, and set the net around them. The tuna-dolphin bond is so strong that the tuna stay with the dolphins during this process, and thus tuna and dolphins are captured together in the net. Dolphins are released from the net during the backdown procedure. If all goes well, the dolphins are released alive, but the process requires skill by the captain and crew, proper operation of gear, and conducive wind and sea conditions. As with any complicated procedure at sea, things can go wrong, and when they do, dolphins may be killed.

Where is the eastern tropical Pacific Ocean?

Is all canned tuna legally sold in the United States dolphin-safe?

No. While the vast majority of the canned tuna sold in the United States has been certified as dolphin-safe, federal regulations allow U.S. processors and importers to purchase and sell non-dolphin-safe tuna. The tuna must have originated from a U.S. purse seine vessel in sets where dolphins were accidentally killed or seriously injured, from a U.S. purse seine vessel with an assigned Dolphin Mortality Limit under the Agreement on the International Dolphin Conservation Program (PDF, 23 pages), or from foreign purse seine vessels flagged by a country that has obtained an affirmative finding from the Assistant Administrator. However, non-dolphin-safe tuna products must not bear any marks or labels that indicate otherwise.

What is an affirmative finding?

An "affirmative finding" is a set of criteria the United States imposes on nations wishing to import yellowfin tuna into the United States or the importing nation to comport with our environmental laws and requirements regarding dolphin-safe tuna.

No. Canned tuna has never contained dolphin and/or mammal byproducts. Non-dolphin-safe canned tuna is a fishery product that has not been certified as meeting the U.S. definition of dolphin-safe.

No. Federal regulations do not require a product to be labeled dolphin-safe.

Are dolphin-safe certifications by private companies or non-governmental organizations recognized by the U.S. Government?

No. The only dolphin-safe certification process recognized by the U.S. Government as satisfying all applicable federal regulations is the one implemented by NOAA Fisheries' Tuna Tracking and Verification Program.

Is there a fee associated with federal dolphin-safe certification?

Is it true that millions of dolphins have died in the Eastern Tropical Pacific as a result of the tuna purse seine fishery?

Yes. Between 1959 and 1976, it is estimated that over 6 million dolphin mortalities occurred in association with the ETP tuna purse seine fishery. However, since that time the rate of fatalities has dropped dramatically. For example, according to estimates by the Inter-American Tropical Tuna Commission, the total annual mortality of dolphins in the fishery has been reduced from about 132,000 in 1986 to 819 observed mortalities in 2018—about 0.01 percent of the population.

What international organizations are responsible for the conservation and management of tuna and dolphin?

What are tuna species' common and scientific names?

What are the dolphin-safe requirements for the American Samoa longline fishery?

Where can I learn more about the Tuna Tracking and Verification Program or Dolphin-Safe labeling?

Visit the Dolphin-Safe overview page to learn more about the program.