A dolphin-safe label is intended to show compliance with U.S. laws and regulations of tuna fishing operations. The Dolphin Protection Consumer Information Act (16 U.S.C. §1385) describes the conditions in which tuna product may be labeled dolphin-safe in the United States. NOAA has implemented the Act by regulation, which among other things includes more specific documentary requirements; the regulations are codified at part 216, subpart H, of Title 50 of the Code of Federal Regulations.

NOAA Fisheries has launched an online tool to help seafood traders easily identify trade monitoring requirements for their products. The Seafood Import and Export Tool assists users in determining which NOAA trade monitoring programs a specific product falls under based on user-provided information.

The NOAA Form 370 has been revised.

Due to the unique association between tuna and dolphins found only in the eastern Pacific Ocean, and because of the purse seine fishery that area supports, protecting dolphin stocks became a priority for the United States. As a result, the Dolphin Protection Consumer Information Act (16 U.S.C. §1385) was passed in 1990. One of its mandates was the establishment of a national tuna tracking program.

In 1999, the United States signed on as a Party to the Agreement on the International Dolphin Conservation Program (PDF, 23 pages). Among other things, the Agreement mandates the establishment of an international tracking program for tuna caught in the eastern Pacific Ocean.

The International Dolphin Conservation Program Act (PDF, 19 pages) amended the Marine Mammal Protection Act to make the objectives and requirements of the Agreement legally effective in the United States.

In order for tuna to qualify as "dolphin-safe" in the United States, U.S. regulations require a written statement from the captain of the vessel, in most fisheries worldwide, certifying that no purse seine net or other fishing gear was intentionally deployed on or used to encircle dolphins during the fishing trip in which the tuna were caught, and that no dolphins were killed or seriously injured in the sets or other gear deployments in which the tuna were caught. For trips beginning on or after May 21, 2016, captains must also certify completion of the Dolphin-Safe Captain's Training Course. Learn about the Dolphin-Safe Captain's Training Course.

Visit our Dolphin-Safe Certification and NOAA Form 370 pages for information on importing frozen and/or processed tuna and tuna products.

NMFS requires the submission of documentation and information supplemental to the Customs and Border Protection (CBP) entry filing requirements for a number of seafood products, including those tuna and tuna products subject to the TTVP.

Prior to, or at the time of importation, the U.S. customs broker must submit a completed NMFS "PGA Message Set" via the U.S. CBP Automated Commercial Environment (ACE) system containing select information found on the associated NOAA Form 370(s) and the Importer of Record's International Fisheries Trade Permit (IFTP) number. Furthermore, a completed NOAA Form 370(s) and associated certification(s) (i.e., captain, observer, and/or IDCP-member nation certifications) must be submitted prior to, or at the time of importation, via the U.S. CBP ACE Document Imaging System (DIS). The scanned NOAA Form 370 documentation can be submitted either through the customs broker's respective entry filing software or via E-mail. Either way, it is imperative that the appropriate Agency Code (NMF), Document Code (NMF-01), and/or Document Label (NMF_NOAA_370_FCO_PKG) is used to ensure that the NMFS TTVP receives the NOAA Form 370 and associated documentation. See the guidelines below for additional information.

Found in temperate waters throughout the world's oceans, tuna is a much-sought-after global commodity. In the United States alone, the supply of canned tuna products was about 671 million pounds in 2016, with an estimated wholesale value of $1.2 billion. Tuna often migrate long distances, so international cooperation is needed to ensure sustainable management. There are several international management and research organizations and programs for the long-term conservation of tuna stocks and other highly migratory species.

Established by international convention in 1950, the IATTC is responsible for the conservation and management of tuna and other species harvested in the eastern Pacific Ocean. The IATTC maintains a Vessel Register that lists all vessels authorized, by the Members, to fish in the Convention Area.

The AIDCP has been ratified or acceded by 13 states, including the United States, and is applied provisionally by another two. Among the objectives of the AIDCP are to reduce dolphin mortalities and ensure the long-term sustainability of the tuna stocks within the Agreement Area. Through the AIDCP, the International Tuna Tracking System (PDF, 5 pages) and the International Dolphin-Safe Certification System (PDF, 3 pages) have been established.

NOAA Fisheries’ West Coast Region staff are involved in the conservation of marine mammals and other resources affected by resolutions made through the AIDCP and IATTC. They serve as advisors and manage policy implementation for decisions made by the United States and the international community. Under the Marine Mammal Protection Act, NOAA Fisheries is responsible for managing the importation of tuna harvested with purse seine nets in the eastern tropical Pacific (ETP) into the United States. NOAA Fisheries issues an affirmative finding to a nation meeting requirements at 50 CFR 216.24(f)(8) in order to allow the importation of yellow-fin tuna products from that nation harvested in the ETP by purse seine gear.

Please contact us with questions about the Tuna Tracking and Verification Program or Dolphin-Safe labeling. 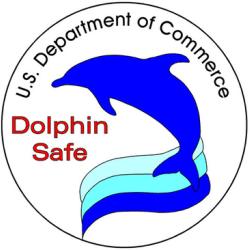 This is the "official mark" designated by the U.S. Department of Commerce that may be used to label tuna products that meet the "dolphin-safe" standards set forth in the Dolphin Protection Consumer Information Act, 16 U.S.C. 1385, and implementing regulations at §216.91 through 216.94.

Learn more about the official mark.