Vessel captains must complete the Tuna Tracking and Verification Program Dolphin-Safe Captain’s Training Course for tuna to be certified as dolphin-safe.

Captain certification of completion of this course is required for all fishing trips that begin on or after May 21, 2016.  However, this training course is not required of captains of large purse seine vessels (having a carrying capacity of more than 400 short tons (362.8 metric tons)) fishing in the eastern tropical Pacific Ocean.

For tuna to qualify as “dolphin safe” in the United States, U.S. regulations require a written statement from the captain of the vessel certifying that "no purse seine net or other fishing gear was intentionally deployed on or used to encircle dolphins during the fishing trip on which the tuna were caught, and that no dolphins were killed or seriously injured in the sets or other gear deployments in which the tuna were caught."  The captain must also certify on the written statement, completion of the NMFS Tuna Tracking and Verification Program dolphin-safe captain's training course.  This written statement is known as a Captain's Statement.

Captains may complete the Tuna Tracking and Verification Program Dolphin-Safe Captain's Training Course by reading all of the information below on this web page or the PDF version (PDF, 10 pages). Reading the Internet links is optional.

NOAA Fisheries has translated the training course into eight languages to ensure that the vast majority of languages spoken by captains harvesting tuna for the U.S. tuna product market are covered by the translations. 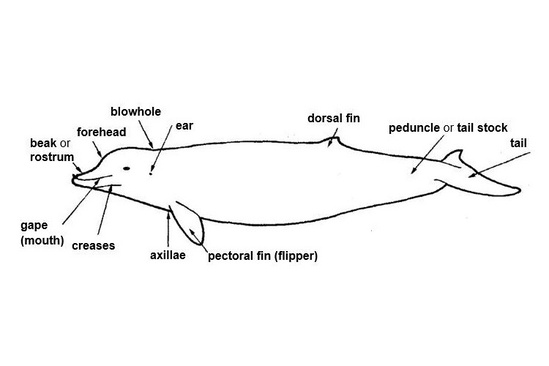 Key dolphin anatomy. Adapted from the Food and Agriculture Organization of the United Nations publication Marine Mammals of the World by Thomas A. Jefferson, Stephen Leatherwood, and Marc A. Webber; 1993. 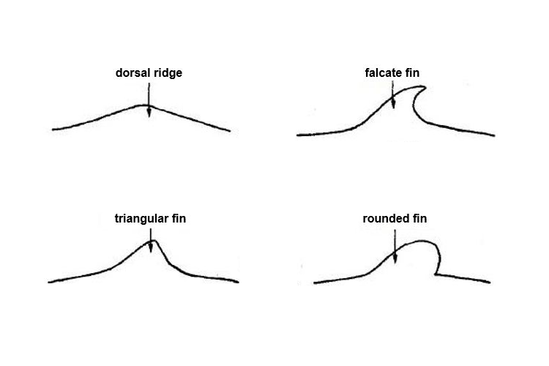 Dorsal fin examples. Adapted from the Food and Agriculture Organization of the United Nations publication Marine Mammals of the World by Thomas A. Jefferson, Stephen Leatherwood, and Marc A. Webber; 1993.

Purpose: NOAA Fisheries does not require captains to identify dolphins down to the species level. However, a captain must be able to identify whether an individual animal belongs to the dolphin taxonomic family, Delphinidae.

There are exceptions to each of these guidelines, but most dolphins have these characteristics.

For information on dolphin identification by species, please see the appropriate chapters in the publication Marine Mammals of the World developed by the Food & Agriculture Organization of the United Nations.

Identifying Intentional Gear Deployment on or Encirclement of Dolphins

None of the tuna harvested on a fishing trip qualifies as dolphin-safe in the United States if, at any time, a purse seine net or other fishing gear was intentionally deployed on or used to encircle dolphins during that fishing trip.

When a purse seine vessel deploys its net, if a dolphin(s) is seen in the encirclement area only after the start of the set (i.e., the skiff is let go), this is considered an accidental capture set. It is not considered an intentional deployment or encirclement of dolphins; therefore, tuna harvested during this set would still be considered dolphin-safe.

A mortality is deemed to have occurred when a dolphin is observed to have died as a result of the fishing set or other gear deployment in which the tuna were caught. In other words, dolphin mortality means the dolphin’s life has ended and it is dead.

Dolphin “serious injury” means any injury that is more likely than not to lead to the death of the dolphin.

The following two lists are provided to help captains assess injury to dolphins. These lists only cover injuries likely to be seen during fishing activities.