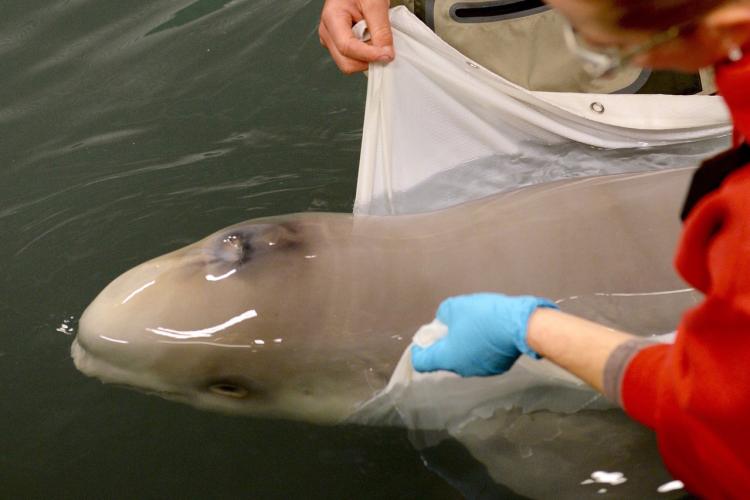 The solitary animal, estimated at two to four weeks old, was found stranded near Trading Bay in western Cook Inlet. The calf was first spotted from a helicopter by a National Oceanic and Atmospheric Administration Office of Law Enforcement (NOAA OLE) Enforcement Officer and Department of Public Safety / Alaska Wildlife Troopers Pilot returning from a patrol in trooper helicopter "Helo 3.” No adult belugas were seen in the area. Under authorization from NOAA Fisheries’ Marine Mammal Health and Stranding Response Program (MMHSRP), the NOAA enforcement officer and the Alaska Wildlife Troopers pilot attempted unsuccessfully to encourage the animal back in the water. NOAA helped coordinate with Helo 3 to transport an Alaska SeaLife Center veterinarian working in the area to the site to assess the animal’s condition. A decision was made to transport the beluga calf to Anchorage for subsequent transfer to the Alaska SeaLife Center in Seward.

“The rescue and recovery of this animal would not have been possible without the support of the Alaska Wildlife Troopers aviation section pilot,” said NOAA Law Enforcement Officer Noah Meisenheimer. “He was willing to re-configure space on the aircraft to accommodate the beluga calf, and once on the ground in the Department of Public Safety hangar at Lake Hood, we were able to keep water on the calf inside the hangar until the Alaska SeaLife Center transport team arrived.”

The calf is currently receiving treatment at the Alaska SeaLife Center’s I.Sea.U.

“The calf appeared to have been stranded for several hours and was in a weakened condition; without evidence of major physical trauma. He is able to swim on his own and is breathing regularly, which are very positive signs. However, there are tremendous hurdles ahead. Because this animal is extremely young, there is a high risk of complications,” said Dr. Carrie Goertz, DVM, ASLC director of animal health.

When the 162-cm-long (64-inch) calf was brought to the Center, it weighed 64.5 kilograms (142 pounds). The calf is currently being fed every two hours with an electrolyte solution and dilute formula.

Beluga whales exist in five distinct populations in Alaska. This calf is from the Cook Inlet population, which is listed as endangered under the Endangered Species Act.

The Alaska SeaLife Center is the only permitted marine mammal rehabilitation center in Alaska, responding to stranded wildlife such as sea otters, harbor seals, and whales. The Center’s Wildlife Response Program responded to this Cook Inlet beluga whale stranding under authorization from NOAA Fisheries. Once a stranded marine mammal is admitted to the ASLC, it receives care from our experienced and dedicated veterinary and animal care staff. Currently, the Center is caring for six patients: two harbor seals, two sea otters, a walrus calf and the beluga calf.

The Alaska SeaLife Center operates a 24-hour hotline for the public to report stranded marine animals, and encourages people who have found a stranded or sick marine animal to avoid touching or approaching the animal. Call first! (888) 774-SEAL.

About the ASLC
Opened in 1998, the Alaska SeaLife Center operates as a private, non-profit research institution and public aquarium. It generates and shares scientific knowledge to promote understanding and stewardship of Alaska’s marine ecosystems. The ASLC is an accredited member of the Association of Zoos and Aquariums. To learn more, visit Alaska SeaLife Center.

High resolution photos and full story available from media@alaskasealife.org or (907) 422-7075.