Bottom trawling is a fishing practice that herds and captures the target species by towing a net along the ocean floor.

Bottom trawling is a fishing practice that herds and captures the target species, like ground fish or crabs, by towing a net along the ocean floor. 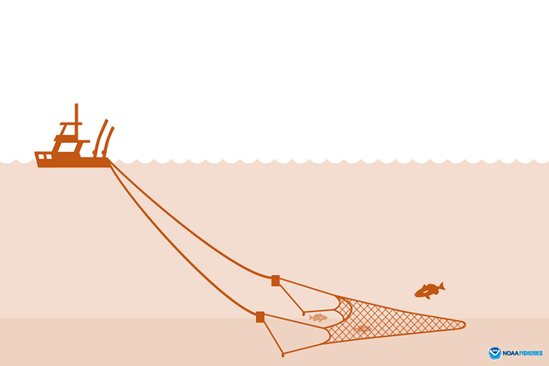 Many sea turtle species rest and forage on the bottom and are at risk of being captured in bottom trawls. Capture in a bottom trawl could result in:

Marine mammals can become entangled by trawl gear when swimming to forage or migrate, with risks differing widely between species. Species that forage on or near the sea floor are at risk of being captured or entangled in netting or tow lines (also called lazy lines).

Pilot whales and common dolphins in the Atlantic are particularly susceptible to being caught in bottom trawls.

Sea turtle mortality in trawl gear was once very high. Turtle excluder devices have greatly reduced these risks in some trawl fisheries and might even allow small cetaceans to escape as well. TEDs are currently only required in trawl fisheries targeting shrimp and summer flounder.