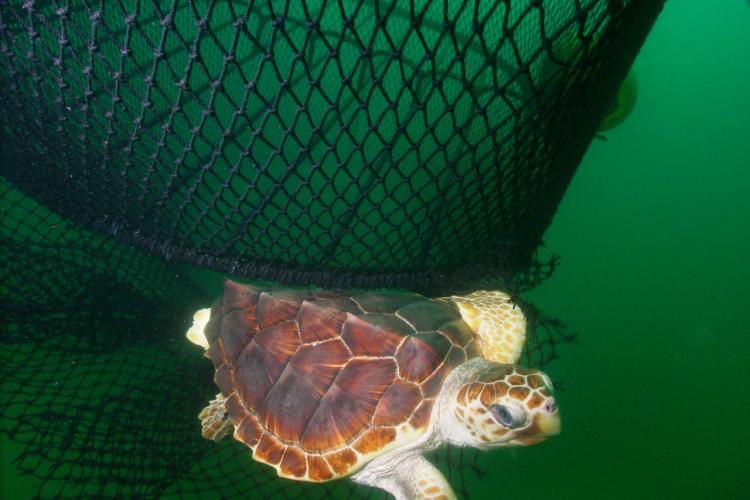 One of the major threats to sea turtles in the marine environment is bycatch, injury, and death during fishing operations. To address interactions between sea turtles and trawl fishing gear, NOAA Fisheries scientists worked with the commercial shrimp trawl industry to develop turtle excluder devices, or TEDs.

The shrimp fishery, which once faced severe restrictions and closures to protect endangered sea turtles, has continued to operate while saving the lives of sea turtles by using TEDs. TEDs have been required in the United States beginning in 1987.  NOAA Fisheries gear experts continue to work with the shrimp fishing industry to develop new and effective ways to reduce bycatch.

A proposed rule that would require TEDs on Skimmer Trawl, Pusher-Head Trawl and Wing Net vessels is currently under consideration.

For more on this proposed rule please see:

What is a TED?

A TED is a grid of bars with an opening either at the top or the bottom of the trawl net. The grid is fitted into the neck of a shrimp trawl.

Small animals such as shrimp pass through the bars and are caught in the bag end of the trawl. When larger animals, such as sea turtles and sharks, are captured in the trawl, they strike the grid bars and are ejected through the opening.

We considered industry concerns and other public comments in developing and implementing TED regulations. Industry representatives continue to participate in developing and assessing new TED designs and modifications. We gradually phased in TED requirements and have provided numerous workshops and programs to work cooperatively with the industry. We remain committed to working with industry as other geographic areas and fisheries are identified that require the future development and use of TEDs.

TEDs in Other Countries

In foreign shrimp fisheries, NOAA Fisheries and the U.S. Department of State have worked closely with nations that export shrimp to the United States to help them develop TED programs comparable to the U.S. program. These programs are now in place in various countries.

The Inter-American Convention for the Protection and Conservation of Sea Turtles, the first multi-lateral binding treaty devoted solely to sea turtle conservation, is also an important framework to further promote TED programs in other countries.