Learn about the history behind the development of TEDs and how they have changed over the last 30 years. 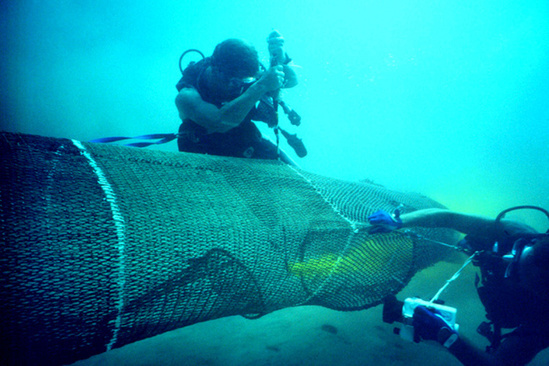 One of the major threats to sea turtles is getting caught in fishing gear and drowned. The term for this accidental catch is bycatch. Sea turtle bycatch is a worldwide problem, but one of the first places it received a lot of attention was in the Gulf of Mexico and South Atlantic shrimp fisheries. Since the 1970s, scientists, resource managers, and fishermen have worked together to reduce the frequency at which sea turtles become bycatch. They succeeded with the development of the turtle excluder device, commonly called a TED.

A TED is a grid, made of metal bars, that is fit into a trawl net. Small animals, such as shrimp, pass through the grid into the mesh bag at the end of the trawl and are caught. When larger animals, such as sea turtles, sharks, and stingrays, enter the trawl net, they are stopped by the TED and are able to exit through an opening either at the top or bottom of the net.

By 1978, all sea turtles found in the northern Gulf of Mexico had been placed on the endangered species list as either threatened or endangered. Shrimp trawling operations had been shown to have the greatest impact on sea turtle populations in the Gulf of Mexico. In an effort to reduce or eliminate sea turtle captures incidental to shrimping, NOAA Fisheries initiated a gear development project in cooperation with several environmental groups, as well as the Southeastern and Texas Shrimp Association. The initial turtle excluders attempted to entirely prevent turtles from entering a trawl by placing large mesh webbing panels across the net opening. Two panel designs were developed and fitted to several different trawl types. The first of these designs reduced turtle captures by only 30 percent while showing shrimp losses between 38 and 53 percent. The second design was significantly more successful, reducing turtle captures by 79 percent. This design, however, still exhibited ineffective shrimp retention, showing catch losses between 15 and 30 percent. In addition to excessive shrimp losses, both webbing panel designs were prone to clogging with everything from large debris to small marine organisms. Following more than two years of extensive testing and modification, webbing panel excluders were determined to be impractical.

By the early 1980s, NOAA Fisheries had begun development of a new style of turtle excluder. This new TED was of rigid construction located well inside the net. Rather than prevent entry into the trawl as the webbing panel designs sought to do, the TED was designed to separate turtles already inside the net from the catch of the target species. This design was essentially a modification of a device already used by commercial shrimp fishermen to exclude jellyfish from their trawls. The box-like frame of the TED, at a weight of approximately 100 pounds, was significantly larger than the jellyfish excluder.

Initial tests of the TED were encouraging. Turtle separation rates of 89 percent were obtained with minimal shrimp loss. Observing the promising performance of prototype TEDs, NOAA Fisheries discontinued research on all webbing panel separators. With their gear expertise and full resources invested in TED research and design, NOAA Fisheries began to realize the potential of these devices to eject finfish as well as other unwanted bycatch.

During the subsequent testing and evaluation of the TED, it was noted that turtles have a tendency to swim upward when captured and/or released. Acting on this observation, top-opening TED designs were tested with impressive results. A turtle capture reduction rate of 97 percent was achieved with minimal shrimp loss.

In 1981, a program was initiated to encourage the voluntary use of the TED by the shrimping industry. Workshops and demonstrations were conducted by NOAA Fisheries in cooperation with state Sea Grant marine advisory programs. TEDs were manufactured by commercial companies under contract with NOAA Fisheries and distributed to individual fishermen interested in the device.

The device, however, was not well accepted by the shrimp industry. Fishermen complained that the TED was too large and cumbersome. The TED did see limited voluntary use during times of elevated jellyfish abundance along the East Coast. While these fishermen were happy with the device's performance, they removed the TEDs when jellyfish were not present.

In 1982, in an attempt to address the complaints of shrimp fishermen, the overall size of the TED was reduced. This reduction in size was supported by information collected by onboard fishery observers regarding the size of turtles caught in shrimp trawls. It was determined that the size of the excluder could be reduced without adversely affecting the TED’s ability to reduce turtle captures.

Fishermen preferred the smaller TED, but many still complained that it was too large. It became apparent that TEDs would not be used voluntarily by fishermen without additional incentives.

In 1983, NOAA Fisheries initiated studies to improve the bycatch reduction abilities and general design of the TED. Alternative lightweight TED construction materials such as plastic and fiberglass were evaluated during this time. Bycatch reduction studies specifically targeting the capture of unwanted finfish led to the introduction of innovative finfish separators. A side-opening finfish separator combined with a finfish deflector resulted in reduction rates up to 70 percent during daytime trawling and 50 percent during nighttime fishing, some sacrifice in shrimp catches were required to achieve these rates.

The advantages of bycatch exclusion made the TED more attractive to fishermen, especially those in the northern Gulf of Mexico. This benefit of finfish reduction seemed to outweigh some of the more unfavorable aspects of the device. Limited numbers of fishermen in North Carolina, Georgia, Alabama, Mississippi, Louisiana, and Texas voluntarily adopted TED usage. However, it appeared that most of the interest of these individuals was due to the potential of the device to reduce finfish bycatch.

Regulations Requiring Mandatory Use of TEDs 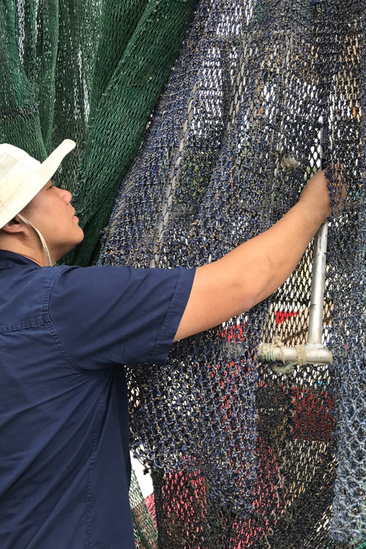 In response to threats of various lawsuits by various environmental groups and industry groups, NOAA Fisheries called for a mediated meeting between representatives of the shrimp industry and environmental protection groups. These negotiations eventually influenced the proposed regulations requiring the mandatory use of TEDs by the commercial shrimp industry. These proposals effectively ended the voluntary usage of TEDs by commercial fishermen.

Additionally, the proposed regulations prompted the University of Georgia Marine Extension Service to design and test several alternative single grid turtle exclusion devices. These devices were lighter, smaller, and more affordable than the TED designed by NOAA Fisheries. Several designs were found to be effective in reducing turtle captures, offering the shrimp industry more options to comply with the proposed regulations.

On June 29, 1987, NOAA Fisheries published final regulations (50 FR 24244) implementing mandatory TED usage requirements in the U.S. shrimping industry. Initially, only four TED designs were approved. These were the NOAA Fisheries’ TED, the Cameron TED, the Matagorda TED, and the Georgia TED. On October 5, 1987, NOAA Fisheries issued a final rule/technical amendment to authorize an additional type of TED. The Morrison soft-TED differed from previous TED designs in being constructed from an upward-sloping panel of flexible webbing instead of the rigid grid used in hard TEDs.

An array of lawsuits, injunctions, suspensions of law enforcement, legislative actions by several states, legislation by Congress, and temporary rules issued by NOAA Fisheries and the Department of Commerce followed the initial 1987 regulations. The result was a patchwork of times and areas where TEDs were and were not required and/or enforced. As a result, TED use was very low throughout the region.

Finally, in 1989 federal regulations went into effect requiring widespread use of TEDs. This resulted in the extensive use of commercial TEDs as well as the development of new TED designs. With widespread use of commercial TEDs came more information on the efficiency of various designs. Combined results of state Sea Grant tests and data from commercial fisheries observers indicated that the single grid TEDs varied in efficiency with regard to shrimp retention. This variation appeared, in part, to be dependent upon the bycatch associated with different shrimping grounds. Additionally, fishermen were still reporting shrimp losses and some original designs were not strong enough to withstand rigorous fishing conditions.

In response to these problems, our gear technologists worked with both fishermen and commercial gear manufacturers to modify single grid TEDs, improving their strength and efficiency.

As TED development and evaluation continued throughout 1989, President George H. W. Bush signed Public Law 101-162 requiring the Department of State, in consultation with the Department of Commerce, to initiate negotiations with foreign nations to develop agreements for sea turtle conservation. Much of the emphasis of this work involves countries whose commercial fishing fleets adversely affect sea turtles. The law further requires the United States to ban the importation of commercially harvested shrimp unless the exporting country has been certified by the State Department as having a regulatory program comparable to that of the United States for reducing the incidental capture of sea turtles in shrimp trawls (Section 609). This certification must be completed annually in order to export shrimp the United States.

Since the early 1990s, the Department of State and NOAA Fisheries have worked together with numerous partners to aid countries in the development of their own TED regulations and TED enforcement programs. Through workshops and regular inspection visits, we work with fishermen around the world to adopt and use TEDs. Today, 40 countries are certified that they have comparable sea turtle bycatch rates to the United States.

Throughout the 1990s, existing TED designs and regulations were improved and a variety of new TEDs, both rigid and soft, were introduced. Of note is the 1994 approval of a TED modification enabling leatherbacks to escape from small grid TEDs. Also significant was the 1998 introduction of a new soft-TED, the Parker TED. Additionally, 2003 saw the introduction of larger TED escape openings to improve the exclusion leatherback turtles and adult loggerheads and green turtles. The double-cover escape opening was introduced, consisting of two mesh flaps covering the escape hole, providing enhanced turtle exclusion as well as improved shrimp retention.

Following 30 years of mandatory use of TEDs throughout the shrimp fishing industry, gear improvements are introduced almost yearly. Our gear technologists continue to work with the industry evaluating new designs aimed at solving fishery- and region-specific issues. As new designs are proven to be effective, NOAA Fisheries authorizes the use of new designs in regulation. In 2012, the approved TED requirements were updated to allow the use of new materials and to modify existing approved TED designs.