Dredging is a fishing method in which a dredge is dragged across the sea floor, either scraping or penetrating the bottom.

Dredging is a fishing method in which a dredge is dragged across the sea floor, either scraping or penetrating the bottom. 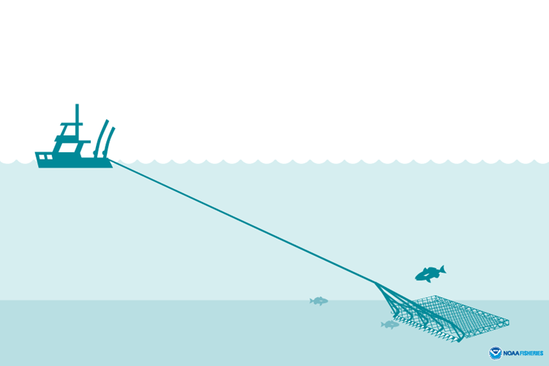 A typical dredge consists of a mouth frame with an attached collection bag. Dredge construction, tow time, and tow patterns vary depending on the area being dredged, species targeted, and the local density of that species, but common features of dredge fisheries include:

Scraping dredges collect animals in the top layer of seafloor sediment with rakes or teeth that scoop up the substrate.

Penetrating dredges use pressurized water jets to chase animals out from beneath muddy or rocky bottom substrate and into the collection bag.

The injury of loggerhead, Kemp's ridley, and green sea turtles is common and well-documented in dredge fisheries. Slower tow speeds sometimes allow animals to avoid capture or entanglement. However, dredging can be harmful to the prey species and habitat turtles depend on for survival.

Dredges, when towed across the sea floor, can crush turtles or capture them in the collection bag. Large rocks that accumulate inside the collection bag can damage the shell of captured sea turtles. However, short tow times may lower the drowning incidence of captured juvenile turtles in dredges.

Captured turtles may also become injured when they are dropped on the boat deck as the collection bag is emptied.

The risks to marine mammals from dredging are similar to the risks from bottom trawling.

Many species of marine mammals forage on or near the sea floor and are at risk of being captured or injured in dredging gear. Pilot whales and common dolphins in the Atlantic are particularly susceptible to being injured by dredging in nearshore areas.

In addition to being captured, small cetaceans, like dolphins or porpoises, can become entangled in the tow lines.

Mortality is considered low for this fishery type because slower tow speeds allow whales and dolphins to avoid capture or entanglement. However, dredging can be harmful to the prey species and habitat marine mammals depend on for survival.

NOAA Fisheries recommends that fisheries use observers and modified gear during seasons and in areas where sea turtles are likely to occur.

Vessels in the Atlantic Sea Scallop fishery are required to use turtle deflector dredges in certain areas and seasons, which block the entrance to the dredge and deflect turtles over the top of the frame. Additionally, these vessel operators must also install chain mats at the opening of the dredge collection bags to block turtles from the entrance. However, chain mats can lead to underestimating bycatch in this gear type because turtles that are hit or injured by the dredge are no longer hauled up with the catch and cannot be counted.